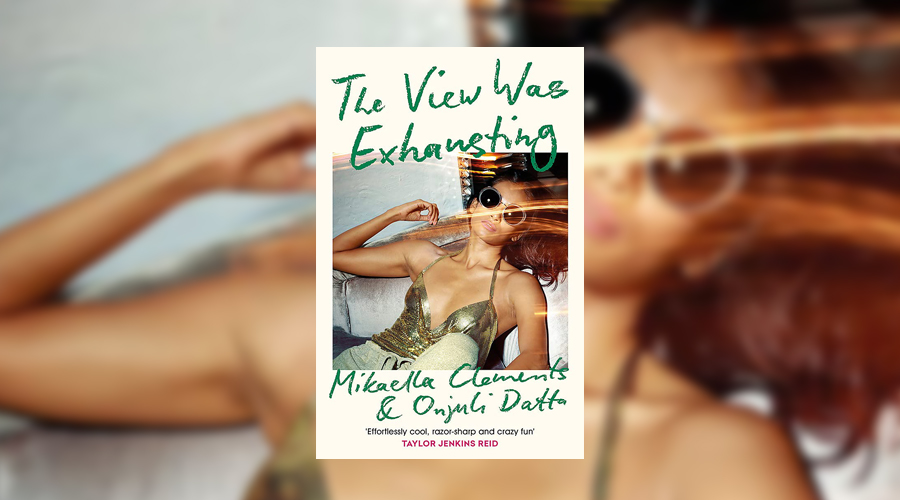 From its very first page, opening on the sun-soaked glamour of Saint-Tropez, The View Was Exhausting displays every hallmark of a book worth losing yourself in. Not only is this escapist fiction at its finest, painting a dazzling yet brutally honest portrait of fame, celebrity and gossip, but it’s also a refreshingly modern love story that explores everything from truth and privilege to love and insecurities.

With a hint of Hollywood allure on every page and luxurious locations, grand parties and celebrity gossip never far away either, Mikaella Clements and Onjuli Datta’s debut novel is undoubtedly a deliciously seductive read from start to finish, but it’s the magnetic relationship between lead characters Whitman Tagore and Leo Milanowski that is deservedly the true shining star of this novel, and their story is a messy, intriguing and heart-wrenching one that you won’t want to put down.

For years it’s been obvious to everyone that international movie star Whitman ‘Win’ Tagore and son of a millionaire Leo Milanowski are the greatest love story of our time. Both young, wealthy and beautiful, their on-again off-again relationship has captured the public’s attention for a decade, through their headline-stopping kisses, their pitch-perfect red carpet appearances and their fights that break the internet – no one has to know that their relationship has always been fake.

As a woman of colour, Win knows that her public image is everything and that she has to work harder than anyone else to prove herself, so when Win finds herself facing public scrutiny once again after an ex-boyfriend leaks a damaging voicemail message to the press, she calls in Leo for another staged reconciliation set against the stunning backdrop of the French Riviera. As ever, their friendship is warm and easy, their chemistry is electric and pretending to be in the midst of another passionate romance is easy for the both of them as they share genuine moments, fake kisses and good press. But this time around, Leo is keeping a secret and when it comes out, Win’s personal and professional lives come crashing down around her. With the world’s eyes still on them, Win and Leo must face the truth of their relationships and their feelings for one another once and for all – even if it comes at the cost of Win’s rising career.

“The world thought Win had the perfect love story with the perfect man, passionate and devoted, always breathless, always in the honeymoon stage, stormy and on-again, off-again but still that strange, magical thing: true love. But Win had something better than that. She had a friend, and a secret.”

Between the glamorous settings, the exposure of the brutal reality of the Hollywood machine and the careful exploration of the intersections of fame, power and representation, it’s easy to forget that, at its heart, The View Was Exhausting is a romance novel. There is so much more than meets the eye to this story, and every layer that’s woven into this narrative just adds more depth, realism and unfaltering honesty to the story that’s being told. As a British Indian actress in Hollywood, Win is always thinking about the expectations placed upon her as she’s left facing the pressure of the knowledge that her actions will have an impact on how many more young women of colour are given a chance in this cutthroat industry.

Not only is it easier for Win to fall out of public favour, but she’ll be less easily forgiven too, and it quickly becomes clear that this is a chance Win is not willing to take. As a result, Win is constantly weighing up the risks of her actions, the image she presents to the world and how much scrutiny she’s under. It’s a kind of pressure that Leo, being a good-looking, charming and rich white man with no real responsibilities, cannot possibly comprehend, and his unintentional ignorance of Win’s precarious position is both very real and very frustrating. In that way, The View Was Exhausting feels very much like a character study at times, delving deep into Win and Leo’s minds to unravel all of the thoughts, memories and flashbacks that make up their version of their seven-year relationship to highlight the many ways in which each character and their life is different just as much as it explores how perfect they are together too.

Because, of course, this is ultimately a love story, and it’s a very, very good one. Win and Leo’s warm and real friendship is evident at once, packed with easy familiarity and gentle banter, and it fills the whole story with the kind of delicious tension you only get when you’re reading a romance and waiting for the pieces to all click into place. As a romance novel, The View Was Exhausting draws on familiar tropes in new and exciting ways, taking the caricature-esque potential of ideas like ‘fake dating’ and ‘friends to lovers’ within the ultimate of wish fulfilment settings and grounding them with its flawed characters, practical matters and the darker, angrier reality of what happens when your lies begin to catch up with you. Even the dual narrative approach is given a different spin here, with readers spending time in both Win and Leo’s heads but for much longer periods of time that a chapter apiece, allowing for a more intimate look at their thoughts and shifting emotions as they play out, rather than as immediate reactions to the events of the chapter that came before.

With this debut, Mikaella Clements and Onjuli Datta have delivered a gorgeous, glittering story that digs beneath the surface of the very real and very swoon-worthy romance at its core. It’s not always a perfect read; like other romance novels, this book does fall into the trap of failing to expand the role of some of its side characters and it can feel a bit repetitive too, with the same problems and miscommunications circling back around a few too many times. But all of the good very much outweighs these minor niggles, and this book really is breathtakingly brilliant.

With its far-flung locations, dazzling world of celebrity and the simmering connection between Win and Leo, The View Was Exhausting easily recommends itself as a must-read book of the summer, but it’s the careful world-building, the astute observations and the multi-layered narrative that make this a book that must be read, no matter the time of year.