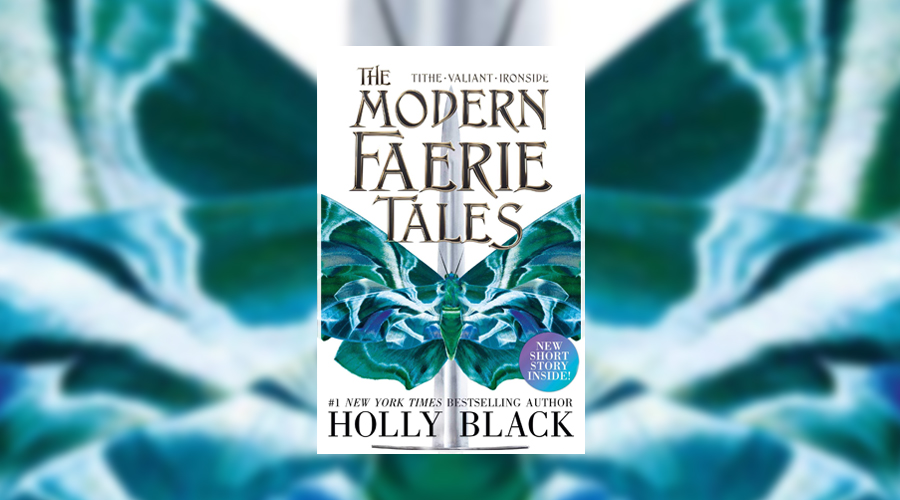 Holly Black is having a well-deserved moment in YA fantasy right now, following the phenomenal success of her The Folk of the Air series. It kicked off with The Cruel Prince and was later followed by The Wicked King and the final book in the trilogy, The Queen of Nothing, recently had its release date pushed up so it’ll be with us before the end of the year too. So what else can be done to build on that buzz and keep readers’ appetites for the world of faerie whetted in advance of the next book? Re-release some of Black’s older faeries stories into a jam-packed omnibus book, of course.

The Modern Faerie Tales brings together three of Black’s earlier novels in one place – 2004’s Tithe, 2006’s Valiant and 2007’s Ironside – but while The Folk of the Air trilogy explores the intricacies of the High Court of Faerie, the Modern Faerie Tales trilogy focuses in on a more human introduction to the faerie world. In Tithe, sixteen-year-old Kaye returns to her childhood home in New Jersey after years on the road with her mother’s band and is soon drawn into an ancient and terrifying power struggle between two faerie kingdoms when she saves the life of a knight of the Unseelie Court. In Valiant, seventeen-year-old Val similarly stumbles into the world of faerie when she runs away from home and falls in with a group of squatters in New York City and quickly finds herself caught up in a faerie murder mystery. Finally, Ironside serves as the sequel to Tithe, picking up with Kaye and her knight, Roiben, as he’s about to be crowned King of the Unseelie Court – but holding onto power in the faerie world is no easy task, and there’s a war being waged over Roiben’s new throne.

Each of these stories can be described in more or less the same way: they’re dark, they’re violent, they’re mature, and they’re wonderfully rich with detail. There’s certainly no denying that this is a dynamic world that Black has created, and readers are rewarded with brilliantly vivid descriptions of characters, places and mythology that means each novel quickly proves itself as a hearty dose of escapism from the real world. From the blue collar, working-class streets of Kaye’s hometown in New Jersey through to the underbelly of the New York subway and the casual, grotesque violence detailed in the Court of Termites, Modern Faerie Tales excels at its world-building – in both mortal and faerie realms.

“It was an eerie thing to see a stump here, nestled up against a building as if they were kin. But perhaps no eerier than the idea that she’d fallen into a fairy tale.”

However, considering the 10+ years difference between the publication of Tithe and The Cruel Prince, it’s perhaps inevitable that the Modern Faerie Tales stories are just a little less polished, and a little less well-crafted than the books that came later – and many of the books’ problems are only highlighted by the fact they’ve been packaged as one whole here. Tithe is a wonderful introduction to Kaye, faeries and the Seelie and Unseelie Courts, and part of its impact is that we as readers discover this new world alongside Kaye, who learns more about her place in the world as we go along the novel too. Tithe is fast-paced – possibly even too quick at times – but it also revels in its dark and dangerous new world, which is filled with peril, deception and intrigue.

The trouble is that Valiant spends a lot of time doing the same thing, just with a slightly different lead. Like Kaye, Val is curious, stubborn and walking a fine line between being foolish or brave and, like Kaye, Val falls in with a crowd who serve as a guide to faerie customs and behaviour. Both protagonists also fall in love with a faerie figure, and both love interests also prove to be standoff-ish and prone to jumping to conclusions too. Thankfully, Ironside is a fitting finale, primarily focusing back on Kaye, Roiben and the grander scale threat of war with only cameos from the Valiant cast, ensuring the more engaging characters and plotlines drive the trilogy to its conclusion.

When read alongside The Cruel Prince and The Wicked King, it’s clear which trilogy has the upper hand – and honestly, that’s exactly how it should be, especially considering the increased quality of YA books over the last 15 years too. But anyone looking for a way to delve back into the faerie courts however they can is sure to enjoy Holly Black’s original faerie trilogy.The Modern Faerie Tales are three well-written novels that prove to be quick and engaging reads, even if they’re not entirely memorable by the time you’re finished.

And, for added enticement, this edition also includes a new short story, The Lament of Lutie-Loo, which, while being the very definition of a quick read, links this trilogy nicely to The Folk of the Air series and includes a number of familiar faces that fans of both series will be delighted to see again.