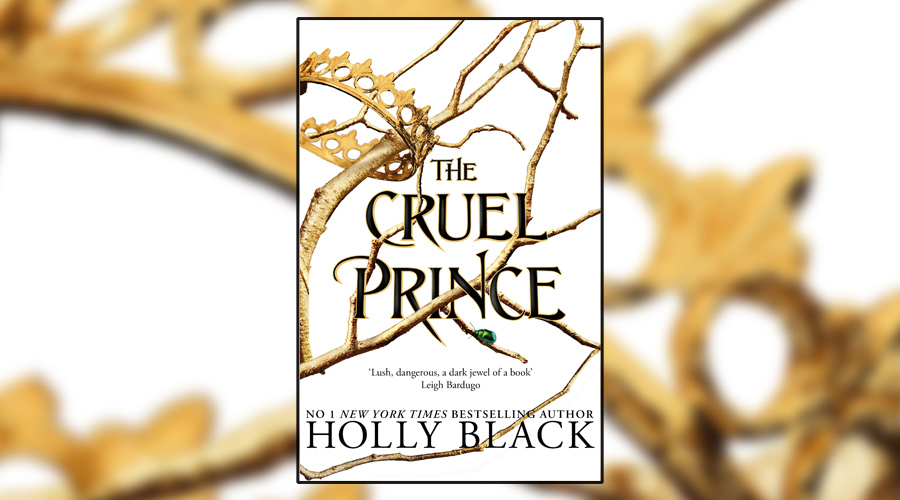 The first book in contemporary fantasy author Holly Black’s The Folk of the Air series opens with a prologue that practically grabs the reader by the collar and compels them to keep reading. Parents are murdered, children are stolen, and the scene is set for a story that’s at once magical and dangerous, filled with action, passion, betrayal and characters you simultaneously love and hate.

When she was seven-years-old, Jude Duarte was abducted from the mortal world with her two sisters after witnessing the murder of their parents. Spirited away to the world of Faerie, Jude, her twin Taryn, and their older, rebellious half-sister, Vivi, are installed into the royal court and forced to live amongst a kingdom of magical creatures. As part of the household of the High King’s general Madoc, Jude lives on a regal estate and is afforded the same luxuries as the royals around her, but after ten years she still doesn’t fit in. Whilst prim Taryn would do anything to belong, and Vivi is slowly plotting her escape back to the human world, Jude yearns to prove herself by becoming a fierce and powerful knight.

Mocked, tormented and looked down upon by her peers for being mortal, Jude knows that to survive she needs to be smarter, craftier and more devious than the Fey who surround her. Worst of them all is the Cruel Prince of the title, Cardan, who, along with his arrogant, self-involved cohorts, makes Jude’s life hell. But when the threats on her life change from purely verbal to physical, Jude is given an opportunity to better her position in the Faerie kingdom. She will become a spy for one of two Princes vying for the throne, going against her surrogate father. However, in a court filled with lies, plots and political machinations, Jude’s assignment becomes more difficult and much more dangerous than she could have ever anticipated.

What makes The Cruel Prince such an exciting and often exhilarating story is that Black has a knack for throwing curveballs, and bloody good ones too. Just when you think you know where the story or the character arcs are heading, she sneaks in a crafty twist or a cruel turn that crushes every expectation or plot prediction the reader has amassed up until that point. The final few chapters here are perfect examples of this and, even if by some chance you struggled to get on board with the story, it’s worth reading solely for the moment you realise you’ve had it all wrong.

“You remind me that I am a mere mortal and you are a prince of Faerie. Well, let me remind you that means you have much to lose and I have nothing. You may win in the end, you may ensorcell me and hurt me and humiliate me, but I will make sure you lose everything I can take from you on the way down. I promise you this is the least of what I can do.”

This is a book that shimmers with a magic that’s both brutal and beautiful; where the wicked and wonderful sit alongside each other in perfect harmony. Characters ride toads and dance until they pass out, they eat enchanted fruit and duel with both weapons and words. Yet, where The Cruel Prince flourishes is in its unpredictable characters, specifically its fierce – occasionally feral – protagonist, who’s full of surprises. Jude is a resilient, tough and emotionally driven character similar to Game of Thrones’ Arya, whose circumstances change her dramatically as the book progresses. She goes from a naive teenager with big ideas about what’s right and wrong, who’s good and bad, to a key player in the grand conspiracy upending the court.

Also at the centre of the action is Prince Cardan who, despite initially being riddled with all the stereotypical characteristics of the malicious and selfish antagonist, actually has all the makings of a fantastic and complex antihero. It’s going to be intriguing to see how Black advances characters like Taryn, Madoc and Vivi, but it’s going to be even better seeing the prickly relationship between Jude and Cardan play out as the series progresses.

It’s difficult not to just gush about how completely absorbing Black’s writing is. She’s known for the Modern Faerie Tales trilogy and the continuing middle grade The Magisterium Series (co-written with The Mortal Instruments author Cassandra Clare), so it’s hardly a surprise that this first instalment in The Folk of the Air shares the fantastical magic of those previous titles. However, this is a much more mature offering, full of darkness, drama and a tension that keeps readers firmly on their toes.

The Cruel Prince was one of the first YA fantasy books published in 2018 and whilst the whole year is still ahead of us, it’s likely to be one of the best too. The long wait for book two has already begun.