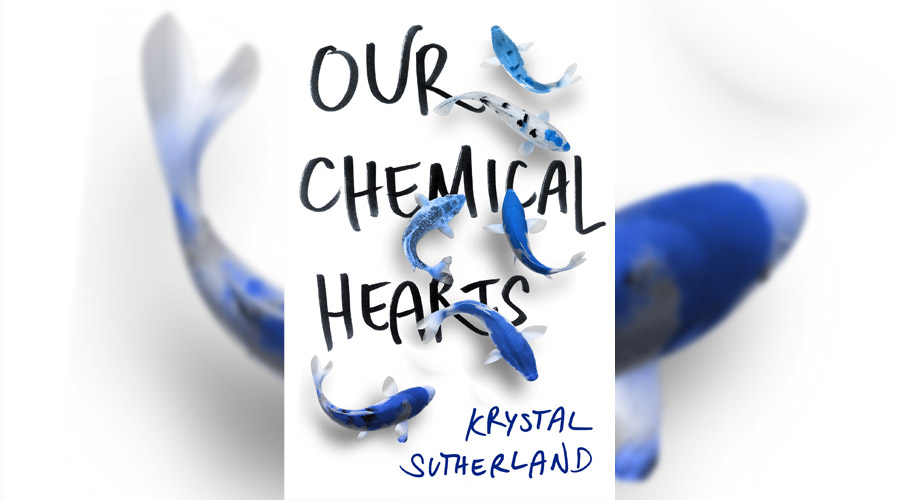 “I always thought the moment you met the great love of your life would be more like the movies”, says protagonist Henry Page on the first line of Krystal Sutherland’s debut novel, Our Chemical Hearts. He’s referring to new girl Grace Town, who limps into his drama class with a cane, dressed in boy’s clothes and looking like she hasn’t showered or eaten a decent meal in weeks. Grace isn’t the great love of Henry’s life though. He just thinks she is.

As Henry muses early on, his attraction to Grace isn’t instant, but once he realises he’s fallen for her – after they break into the flooded basement of an abandoned train station – he becomes consumed by her oddness and eccentricities, her withdrawn and moody temperament hooking him in like a drug. Tasked to work on the school newspaper together, Grace and Henry become something of a couple, though Grace refuses to let it become public. At no point does she ever tell Henry she shares his strong feelings and yet she doesn’t discourage him either, which is both confusing and tormenting for a teenage boy who never cared much about girls before he met ‘the one’.

Grace is not a typical leading lady; she’s damaged and traumatised – though she’ll never discuss it – and she’s like a poison to Henry, sucking the life out of him as he spirals further into her toxic existence. As a reader looking in, it’s easy to see where Henry’s going wrong. He tries to play it cool but his heart is firmly on his sleeve, and Grace toys with him because he makes her feel good, he makes her forget. The story holds all the bittersweetness and yearning that comes from giving your heart to someone for the first time and having it squeezed, prodded and pulled at like a piece of Play-doh.

“Maybe it was possible to love two different versions of someone at the same time. And maybe, just maybe, some people still wanted redemption for sins they didn’t need absolved anymore.”

Sutherland has perfectly captured the angst of not only awkward first love but also being a teenager in a world that doesn’t always make sense and is rarely fair. It can be difficult to get your priorities right – school should come first and yet romance often feels like the more important thing. The love that Henry feels for Grace is a warped kind of love; he’s addicted to the idea of her, this manic pixie dream girl, but how do you tell love and infatuation apart when you’ve barely experienced either?

Part of why Our Chemical Hearts is so affecting and genuine is because of the peripheral characters away from Henry and Grace: Henry’s parents for example, who seem to have the sickeningly perfect marriage that gives their son unrealistic expectations, or his best friends Lola and Murray, who both have their own views of the Henry-Grace whirlwind romance but support their friend no matter what. These are real, honest and loveable characters who never once feel forced or false. As for the leads, Henry and Grace, you’ll go through moments of loving and despairing with them both – they’re only human after all.

Our Chemical Hearts is a poignant YA story of friendship, romance, heartbreak and tragedy, which refreshingly doesn’t promise a neatly bow-tied ending. It might not be a typical love-at-first-sight story but it is a love story. “Well”, as Henry himself says, “Kind of.”