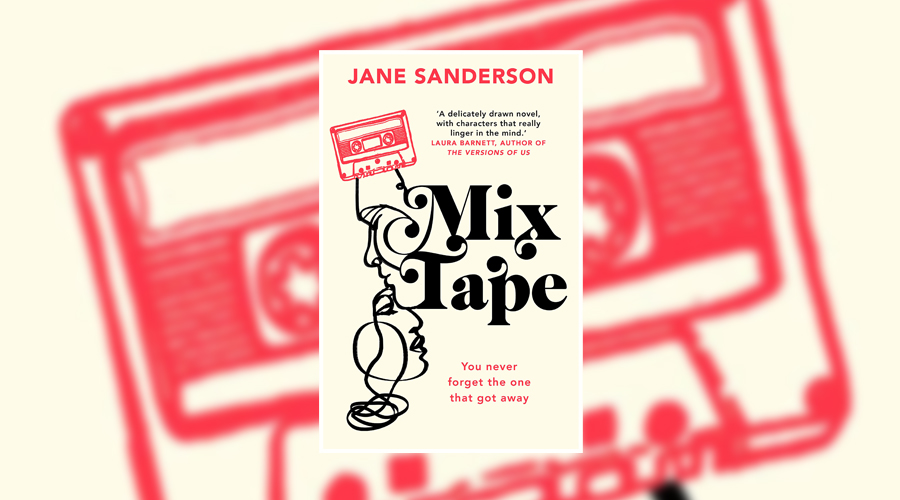 Jane Sanderson’s Mix Tape is a “the one that got away” story that benefits from a built in soundtrack. Taking readers from the late 70’s in Sheffield to the early 2010’s in Scotland and Australia, it tells the tale of Alison and Daniel, a young couple who end up parting ways for 30 years and reconnecting through social media shares of songs from their past, and present.

Mix Tape muses about a young love that turns into a reawakening of old feelings as the adult Daniel and Alison begin to exchange songs. Daniel is a music writer sending picks from Scotland and Alison is an author now living in Australia. They have partners and children and comfortable lives, but that doesn’t stop them dipping their toes in the pool of reconnection. They use lyrics to speak to one another and it’s that shared language that proves they’re meant to be together.

Music devotees and those who remember growing up in the 70’s and 80’s will take to this novel quickly; the nostalgia of the time is grounding for the story. Young love is universal but there’s not only a huge difference in the post iPod world, but there’s a specificity of culture that comes from music in each decade. From Blondie to Belle and Sebastian, the songs from Alison and Daniel’s teenhood are there to invoke your own memories when they hear the songs, though for the uninformed, they do carry the scenes and give them more tangibility.

This isn’t a fast paced novel, rather it ambles like the relatively ordinary lives of its characters. Granted, they are creatives who have a certain amount of freedom, but what’s explored is the emotional intention behind the connection Alison and Daniel have and had. There are moments of drama, some predictable and some perhaps unnecessary, and these are not the parts that resonate most effectively. Sanderson’s novel is most captivating when she draws on the characters who surround the main duo, bringing them to life.

Alison’s brother Peter is spoken of with such warmth and kindness that you can easily imagine his protective embrace. Daniel’s parents are prim yet kind. His mother is the tidy, protective lioness with a perfectly tidy home and as much gossip as she can gather politely. His father prefers to leave the words to his wife, but has quiet passions of his own. Certainly not all the characters are as chilled and demure as those from Sheffield. In Australia, we meet Alison’s wild friend Cass who always seems to be with a bottle of wine and a hankering for the truth. Then there’s the get up and go spirit of Sheila, Alison’s mother’s former pen pal and her new confidant, who is a mother figure and guide for Alison, and briefly Daniel.

Sanderson delinerates easily between the erratic, hopeful and easy teenagers, who have so much to learn about the world and themselves, with the grown-ups they become. With the adult Alison and Daniel we get to see how character traits can be transformed by time and waning hormones. Alison’s fear and stubbornness becomes placid acceptance. Daniel’s intense love and familial indifference turns to practiced romance and directness. Their mature selves have happy lives, but they lack a spark that is both youth and the connection you have with someone who truly gets you.

If you’re looking for an easy read to take a journey with, then pick up some headphones and play along while you read Mix Tape.

Mix Tape was published by Bantam Press on 23 January 2020