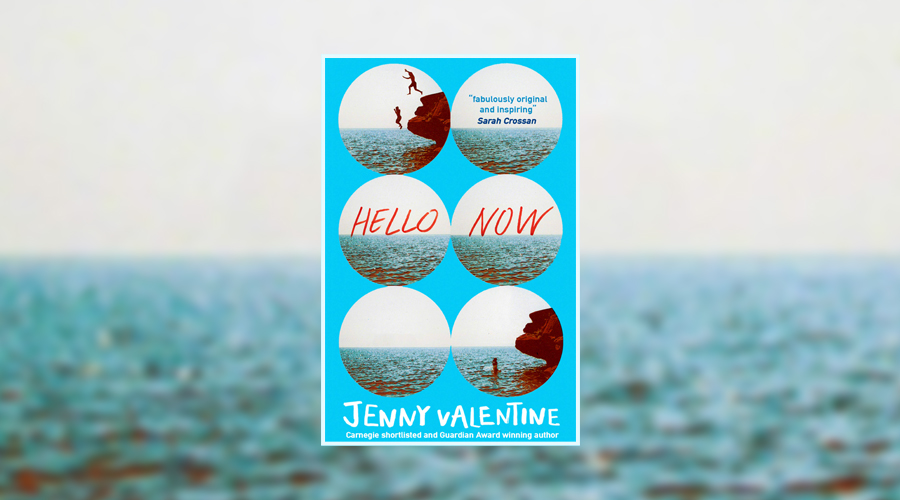 With just 192 pages, Hello Now feels closer to a novella than a typical novel but, frankly, you don’t need a lengthy page count when you use language as beautifully as Jenny Valentine does. Told through the eyes of a teenager who doesn’t believe in love until one day they do, this is an utterly original and dreamy story that traverses time and logic and possibility.

The book opens with Jude’s mum upending their life for the umpteenth time and moving them to the small town she grew up in. Jude doesn’t relish the idea of starting over again in a dead-and-alive seaside town where the average age is well over fifty. Even worse is the bizarre housing situation they’re moving into: the only house Jude’s mum could afford was one that already had an occupant – an eldery sitting tenant called Henry Lake who came with the sale. So they move in, living around Henry’s rooms on the middle floor “like the white surrounds the yolk of an egg.”

Jude doesn’t believe that anything extraordinary or momentous could ever happen in this dreary town. That is until a boy called Novo arrives, changing both of their worlds irrevocably. You might be thinking this all sounds like the start of so many YA romances where two young outcasts meet and fall in love, but Hello Now has an element of magic to it that sets it apart from the rest. Jude and Novo’s relationship feels like drifting through someone else’s dream; we’re spectators to their love story. It’s full of wonder and yet there’s a creeping feeling that the illusion can’t and won’t last forever. The dream will eventually, inevitably, end.

“I didn’t know yet that it was the spell cast, right then, in that moment, and all the known rules already thrown out. I didn’t know it was the start of something wild and unforgettable, impossible and true.”

Through Jude and Novo, Valentine captures all the messy, painful, fleeting and chaotic aspects of love. It’s not a happy-ever-after story or a sweet, straight-forward teen romance – it’s layered and unbound to a particular reality or time. It’s also open to assumptions and reader understandings; Valentine doesn’t pin Jude down as male or female, boy or girl. In her own words, “Jude is neither. Jude is both… this isn’t a book about gender. Jude is just Jude.” In this respect, reading Hello Now feels like looking through a prism that creates different perspectives depending on who the reader is and how they interpret the character.

Hello Now is a story about love and time and falling for someone hard, without the certainly of a soft and safe landing. It’s peculiar and curious and surreal and really quite enchanting if you give yourself over to the ethereal, poetic nature of it.