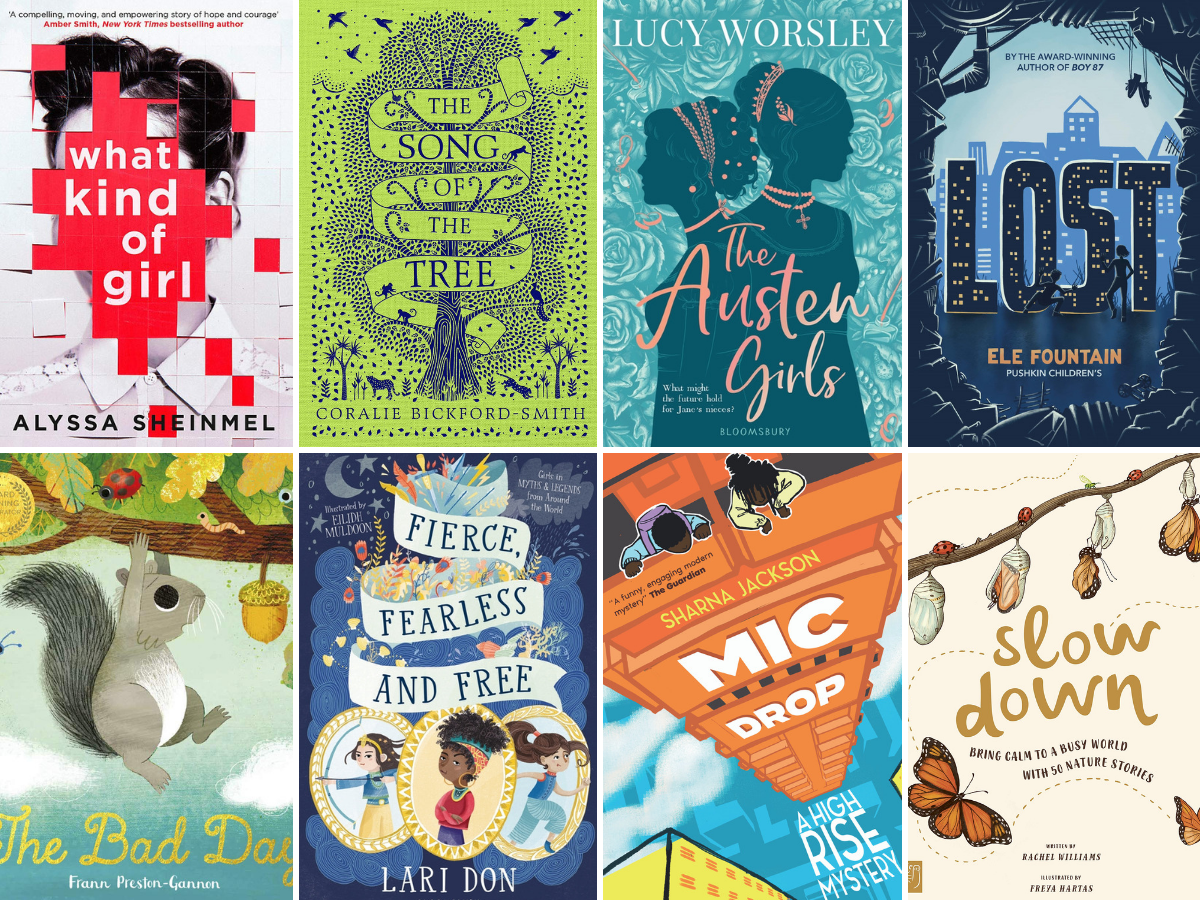 Whether you’re settling down for story time with the kids or simply seeking an escape from all the adult drama found in general fiction, there are some wonderful children’s and YA books to help alleviate the stress and boredom in these weeks of lockdown. From illustrated tales to middle grade adventures to coming-of-age fables, here are 15 of our favourites from the year so far.

Slow Down: Bring Calm To A Busy World With 50 Nature Stories by Rachel Williams 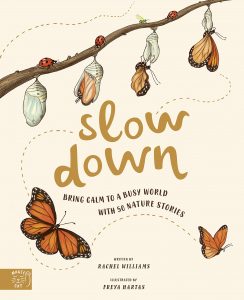 Having to distance yourself from people isn’t entirely bad – it gives us the opportunity to reconnect with nature. Rachel Williams’ Slow Down celebrates the natural transformations that happen outside, most of the time without us even noticing. Dew collecting on a leaf. A bee pollinating a flower. A sunflower tracking the sun. All this wonder and magic in the world and we miss so much of it because we’re so busy. Complemented by Freya Hartas’ beautiful illustrations, the book features 50 nature stories to encourage readers to slow down, press pause and take a look around. You’ll feel better just for reading it. (24 March, Magic Cat)

The Song of the Tree by Coralie Bickford-Smith 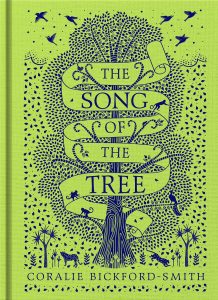 Known for her illustrated covers of the Penguin clothbound classics, Coralie Bickford-Smith’s designs are always a visual treat. Her latest is a delightful picture book that instantly charms with its colourful patterns and heart-warming story. Set in the jungle, it’s a tale of changing seasons and a little bird who must listen to the other animals as she learns to say goodbye to a place she loves. It’s a lovely book for all ages; little’uns will be captivated by the mesmerising pictures, whilst adults will find deeper meaning in Bickford-Smith’s story of growing up and letting go. (5 March, Particular Books)

Peanut Goes for the Gold by Jonathan Van Ness 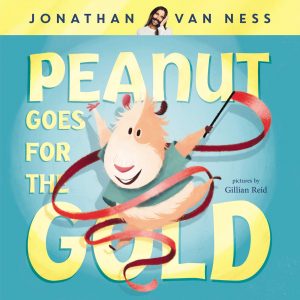 The debut picture book from Queer Eye’s Jonathan Van Ness is an empowering and inspiring story of being comfortable in your own skin and unapologetically loving who you are. It follows the adventures of a gender nonbinary guinea pig called Peanut who decides to become a rhythmic gymnast. Full of positivity, warmth, humour and heart, Peanut Goes for the Gold is the kind of story that champions self-love and celebrates those who chase their dreams. A fun, upbeat story with a valuable message for all youngsters. (2 April, HarperCollins)

Marie Curie and the Power of Persistence by Karla Valenti 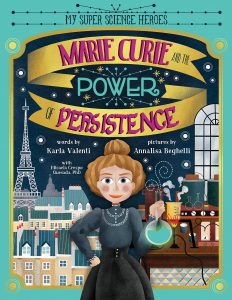 Published in partnership with the Marie Curie Alumni Association, the first book in the My Super Science Heroes series is a fictionalised tale that imagines the famous physicist and chemist as a superhero. Using her brilliant brain power to fight the obstacles that come her way, Marie must thwart an evil nemesis who wants to stop the spreading of knowledge throughout the world. Combining storytelling and illustrative forces, Valenti and illustrator Annalisa Beghelli have created a fun and educational book that explores Marie Curie’s life and work in an inventive, digestible way. (1 May, Sourcebooks Explore)

The Bad Day by Frann Preston-Gannon 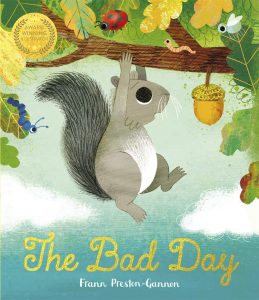 Squirrel climbs a tree in search of a nut and can’t get down. Woodpecker gets his beak wedged in a tree. Snake becomes tied in a knot, whilst Turtle gets stuck upside down and Fox’s tummy hurts. These animals all need a helping hand – perhaps together they can figure it out and save another little life in the process. Frann Preston-Gannon’s The Bad Day is a short, sweet and lyrical tale about the importance of friendship and teamwork – two things that never go out of style. (2 April, Templar Publishing) 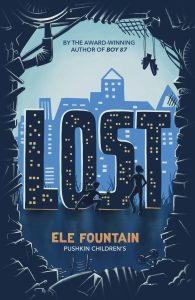 An exciting adventure with a poignant social message, Lost is one of the best children’s books you’ll read this year. It follows thirteen-year-old Lola as she races to find her brother Amit when they’re separated after their father fails to come home and their landlord forces them out of their house. Penniless and without any parental protection, Lola must journey through a perilous city and rely on a makeshift family of other homeless and abandoned kids to guide her. At once timely and tender, Ele Fountain’s second children’s book is a story of love, friendship, loyalty, bravery and the importance of home. (12 March, Pushkin Children’s) 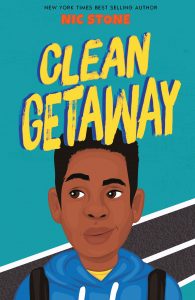 Nic Stone’s debut middle-grade novel centres on eleven-year-old William ‘Scoob’ Lamar as he embarks on a spontaneous adventure with his grandma in her new camper van across the American South. As the impulsive excursion unfolds, ‘G’ma’ takes Scoob on a journey down memory lane where he realises that nothing is quite as it seems. This is a heartening road-trip story of family secrets, flawed heroes and America’s history of racial prejudice and segregation. (5 March, Knights Of) 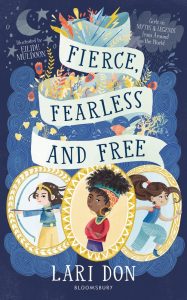 From Armenia to Scotland to the Solomon Islands, this multi-layered collection of traditional tales travels around the world, bringing together folk stories, fairytales and fables centred on girls who make their own destinies. These heroines don’t need princes to save them – they save themselves. They explore and learn and carve out their own futures. Lari Don’s stories are brilliantly empowering, each one accompanied by Eilidh Muldoon’s whimsical and wonderfully detailed hand sketches. It’s the kind of book that deserves countless rereads. (5 March, Bloomsbury Education) 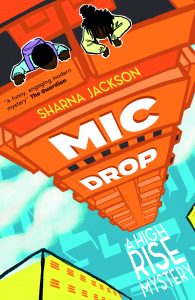 The sequel to High-Rise Mystery reunites readers with young detective duo Nik and Norva as they take on another murder case. It’s October half term and emerging popstar TrojKat returns to The Tri to film a music video. When tragedy strikes, the police assume it was an accident but Nik and Norva suspect foul play – if only they can prove it. Entertaining from start to end, Sharna Jackson’s contemporary detective series is a fresh and fast-paced whodunnit for budding crime-busters. (2 April, Knights Of) 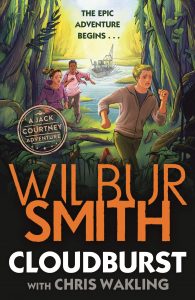 Diverging from his usual historical action novels for adults, Wilbur Smith introduces younger readers to protagonist Jack Courtney as a fourteen-year-old adventurer. When his parents go missing in the rainforest, Jack is sure that it has something to do with the nearby tantalum mines. Along with his friends Amelia and Xander, Jack must brave bandits, mercenaries, poachers and the jungle if he’s to save his parents. The Democratic Republic of Congo provides a colourful and vibrant backdrop for this exciting new children’s series. (19 March, Piccadilly Press) 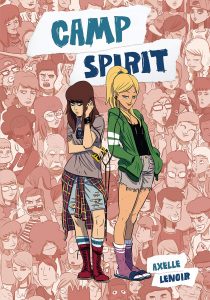 With just two months left before college, Elodie’s mum is forcing her to spend the summer as a camp counselor. With zero interest in kids, nature or sporting activities, Elodie is going to have to muster up some positive camp spirit if she wants to handle the horde of girls under her care. But just as she starts to settle into her new role, a dark mystery lurking around camp begins to haunt her dreams. Axelle Lenoir’s LGBTeen graphic novel set in the 90’s has it all: comedy, romance, rebellious kids and supernatural thrills – what’s not to love? (21 April, Top Shelf Productions)

The Austen Girls by Lucy Worsley 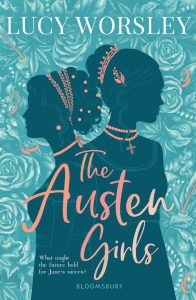 Lucy Worsley’s fourth historical children’s/YA novel explores the life of Jane Austen from the perspective of her nieces Anna and Franny. Under pressure to find rich, respectable suitors, the girls look to their unmarried but content Aunt Jane for guidance. Surely being a single woman isn’t such a bad thing if you’re happy? Witty and full of Worsley’s characteristic wisdom, The Austen Girls is the ideal novel for all Janeites. It’s also a great jumping on point for young readers unfamiliar with Austen’s life. (2 April, Bloomsbury Children’s Books)

What Kind of Girl by Alyssa Sheinmel 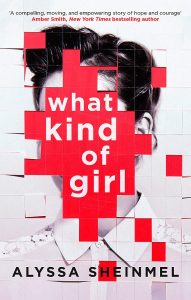 It all begins when golden boy Mike Parker’s girlfriend walks into school with a bruise on her face and a story that points the finger at her popular track star boyfriend. As the rumour mill starts to turn, the girls at North Bay Academy take sides. Some are loyal to Mike, whilst others band together to call for his expulsion. It’s clear that someone is lying – the question is who? Told from multiple perspectives, Alyssa Sheinmel’s latest YA novel is a thought-provoking exploration of the hurts and hardships that young women suffer – both as a result of their own actions and at the hands of others. (6 Feb, Atom) 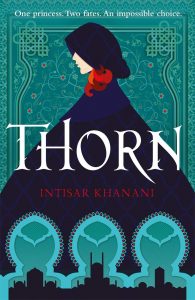 Inspired by the Goose Girl fairy tale by the Brothers Grimm, Thorn is a dark, Middle-Eastern influenced retelling about dangerous secrets, false identities, delicious court intrigue and justice. Robbed of both her identity and her role as princess, Alyrra gladly seizes her opportunity to escape the confines of her royal life and an arranged marriage she doesn’t want. But when she uncovers a secret that threatens the fate of the kingdom, Alyrra knows she can’t stay hidden and silent forever. Perfect for fans of The Wrath and the Dawn. (24 March, Hot Key Books)

What Momma Left Me by Renée Watson 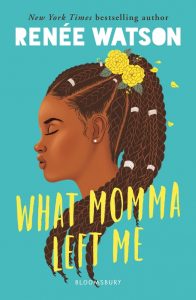 With her mother dead and her father gone, Serenity is looking towards a fresh start with her brother Danny and their grandparents. It means a new school, new friends and a new neighbourhood but for the first time in a long time, Serenity feels hopeful about the future. If only Danny didn’t seem set on heading down the same wrong paths as their father. Renée Watson tackles important, topical themes without letting her story become weighty or maudlin. A realistic and accessible exploration of broken families, race, poverty and staying true to yourself. (6 Feb, Bloomsbury YA)