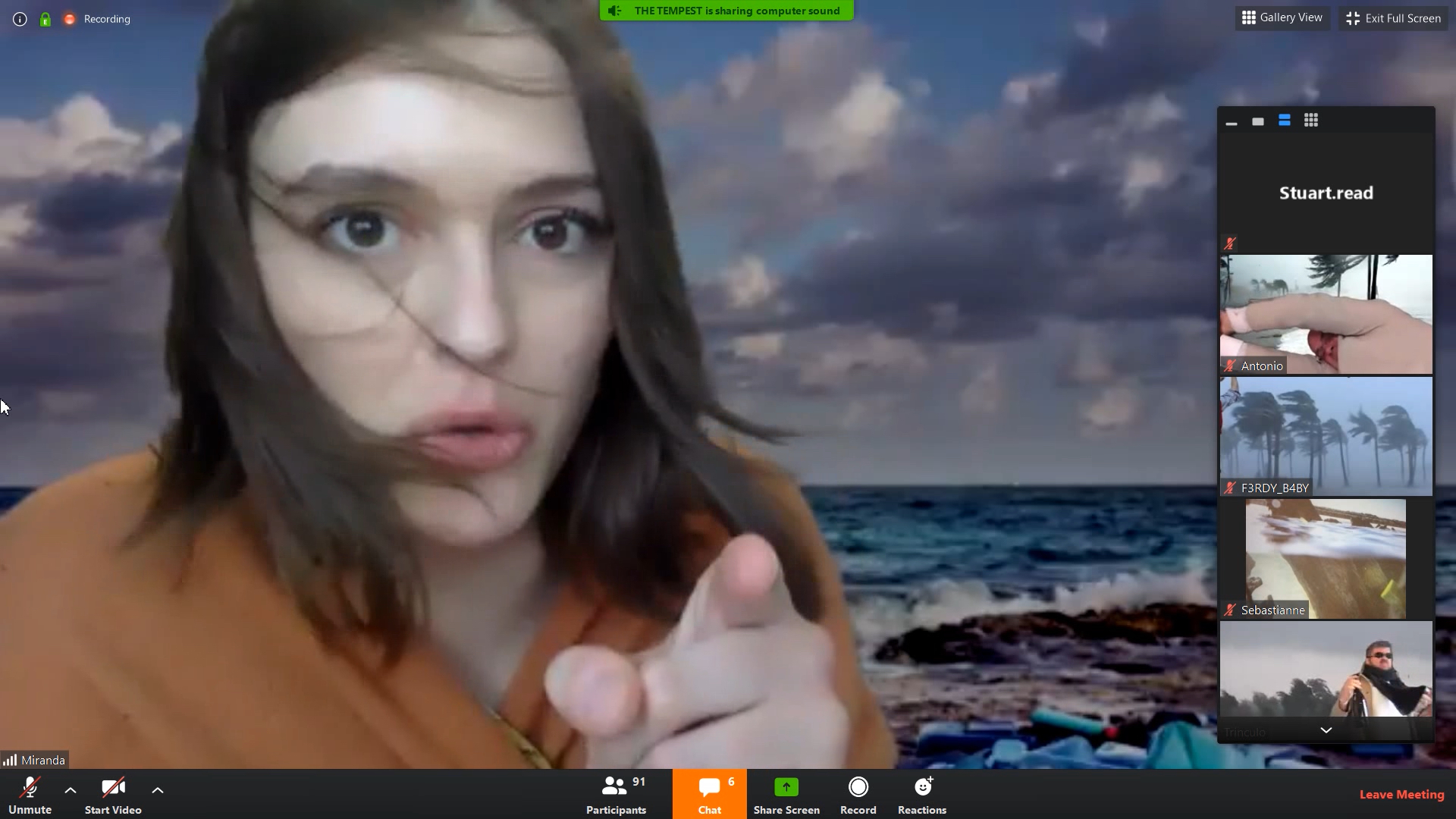 Creation Theatre have moved their 2019 promenade performance of The Tempest from an industrial estate in Oxford to the wondrous portals of Zoom. With sharp editing and clever use of backgrounds the small cast join forces from their lockdown locations and successfully beam live into over a hundred audience living rooms. Shakespearean speeches mix with modern chat which allows for some innovative audience interaction as Ariel asks the watching spirits to help her sow confusion.

Adapted to a linear style and crammed into a well-planned hour duration, the story is stripped back to a simpler form. The royal party travels on a cruise ship from northern Italy but are caught in a magical storm and are separated into factions on a remote island. Thus the urbane posse of Antonio, Sebastianne, Alonso, Trinculo and Ferdinand are pushed into various collisions with the wild exiles Prospero, Ariel, Miranda and Caliban. There’s a healthy dose of easy going humour amidst the eruptions of vengeful rage.

Simon Spencer-Hyde wields his power from a room of televisions as Prospero; he remains focussed and stoic. Given the overarching reliance on one shots, it is difficult to see how the romance of Ferdinand and Miranda might be consummated, but Ryan Duncan and Annabelle Terry find clever ways to cross the divide. Itxaso Moreno is a feisty isolated Ariel, urging the audience into performing bizarre spells and incantations. She even offers an opportunity for spectators to show off pets on their webcams, although none can match up to that of Alonso, enormous credit to Al Barclay. There is a steady supply of ripe ribaldry from Rhodri Lewis as Trinculo, Madeleine MacMahon as Sebastianne, Giles Stoakley as Antonio and Paul (PK) Taylor as Caliban as pacts and rivalries are made then broken.

In these unusual times, Big Telly Theatre Company and Creation have mastered technical and performative complications to produce inventive live theatre full of imagination and surprises. It’s a wonder to behold the smart Zoom backgrounds, which change to signify new landscapes and help establish when characters are in the same place. Conference calls will never be the same again. As the green screens fall and the cast take their bows, it is eye opening to see how they’ve conjured these extraordinary scenes in ordinary spaces.

These virtual performances are delivered via Zoom – click here for more information.