And so opens Jim Sheridan’s The Secret Scripture. Given that his last foray into filmmaking was decidedly disastrous (the stars so unhappy with the final cut of Dream House that they refused to do press, and Sheridan himself tried to have his name taken off the film), it seems Sheridan has returned to his roots in adapting an acclaimed Irish novel by Sebastian Barry. Unfortunately, for all the lush Irish landscape Sheridan paints across the screen, and almost all of the performances being compelling enough, something doesn’t quite click. The Secret Scripture is not greater than the sum of its parts.

Vanessa Redgrave plays one-hundred-year-old Roseanne McNulty, a woman clearly still tormented by the trials of her past as she wanders the corridors of her hospital, which brings her to the attention of Dr. William Greene (played by Eric Bana). The ‘secret scripture’ in question is Roseanne’s Bible, where in the margins and black pages she recounts the events that led to her hospitalisation in the mental institution. Together with a nurse (whose character does not have a name… but she is played by Susan Lynch), they use the scripture along with the information they can occasionally gather from a lucid Roseanne, to discover what truly happened to Roseanne and how she was swept up in the social and religious movements earlier in the 20th century (specifically the time before and during the Second World War – a decade later than what the novel depicts). In that era, around 1942, we see a younger Roseanne played by Rooney Mara. 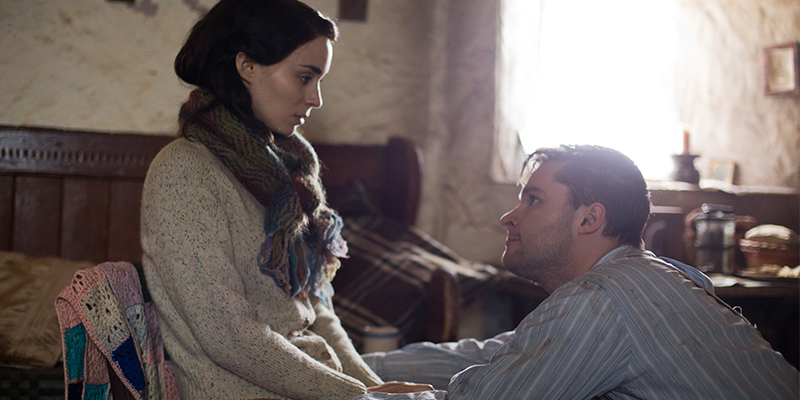 Vanessa Redgrave is magnificent, as is to be expected, not playing up to the clichés of the senile, ‘crazy’ old woman – right from the start we can see the truth desperate to get out, that she cannot quite find the words for anymore. At the same time, however, Mara, replacing the originally cast Jessica Chastain, does an excellent job of conveying, not simply through voice over, the same gravitas. With both of their performances, they communicate the volumes left unsaid – Mara in particular has a very distinctive, loaded gaze that stops any scene.

Through the presence of Theo James’s dark, brooding priest, whose actions display a desire to not only be a man of the cloth, but to be a man, is where the film engages with the idea of religion, and indeed the murkiness that comes with it. Further, along with the other love interests played by Aidan Turner (Poldark) and Jack Reynor (Sing Street), the film creates a love ‘square’, and it is also at this point that it begins to become a bit lost – uncertain about where to point the audience’s attention to. It isn’t tonally confused as much as it hasn’t settled on a genre. Romantic period piece that it is, it dips its toes in almost a murder-mystery thriller and, without giving too much away, familial drama, as well as sometimes choosing to be a classic WWII drama. You get the impression that a larger, intricate story has been condensed to keep the main narrative touchstones – and in the process losing some of the finer details that made it a shortlisted text for the Man Booker Prize.

In a story where much is unremarkable, some stellar performances keep the film from halting to a complete stop, but sadly, in a spring rife with blockbuster releases already, it’s unsurprising that no-one will be along for the ride anyway.