King Arthur: Legend of the Sword opens with a flurry of gonzo visuals, frenetic editing, giant stomping CGI beasts and some wildly incoherent mythology. After a fleeting preamble describing the mythical war between man and mage, massive colossal elephants straight out of Lord of the Rings smash into towers and giant walls, as armies commanded by the Mage leader, Mordred, lay siege to the kingdom of Camelot. Yes, with this CGI blast of frenetic incoherent insanity, it quickly becomes evident that this will not be your typical retelling of the Arthurian legend.

Instead, this is a King Arthur tale as seen through the eyes of Guy Ritchie: a hyper-kinetic high fantasy (that really plays up the fantasy) that portrays Arthur and his band of would-be-knights as a bunch of cockney geezers roaming the gritty streets and back alleys of Londinium, all brought together with Ritchie’s now trademark visual flourishes once perfected in the likes of Lock Stock and Snatch, and then solidified in his Sherlock Holmes movies. 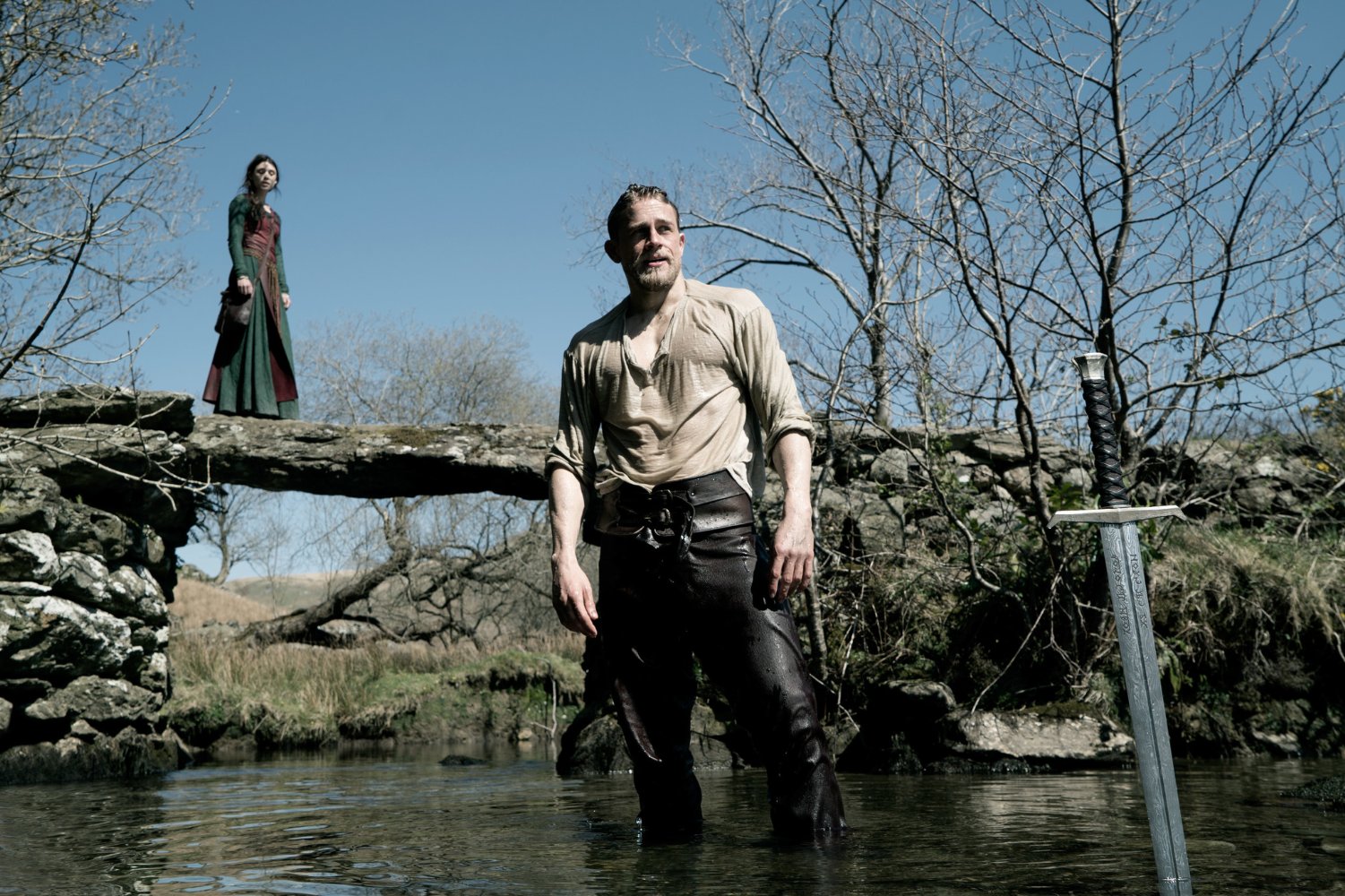 Unfortunately, the end result is less than magical; a bizarre concoction of disparate elements from all manner of sources, weaving together a mythology that never really makes sense and resulting in a film that never comes together as an intelligible whole. Ritchie may have initially envisioned this as the beginning of an epic six-film franchise, but given the film’s less than stellar box office returns thus far, it’s highly doubtful that those plans will come to fruition.

After that initial extended prologue, in which Jude Law’s scenery chewing Vortigern usurps the throne from his brother, Uther Pendragon (Eric Bana in an all too brief appearance), the young Arthur is whisked away, Moses style, in a small boat and winds up being raised in a brothel. After one of many montages, Arthur quickly grows up and becomes Charlie Hunnam, a man who now runs the brothel, looks after his girl, runs his crew, and has the odd shady deal or two on the side, whilst also suffering from intense nightmares regarding the day of his father’s death.

King Vortigern, meanwhile, is dismayed when a certain magical sword stuck in a stone presents itself from the bottom of lake. Fearing for his throne, he orders all men of appropriate age to try and remove the sword from its stone prison and low and behold, Arthur finds himself in possession of a birthright he never wanted. 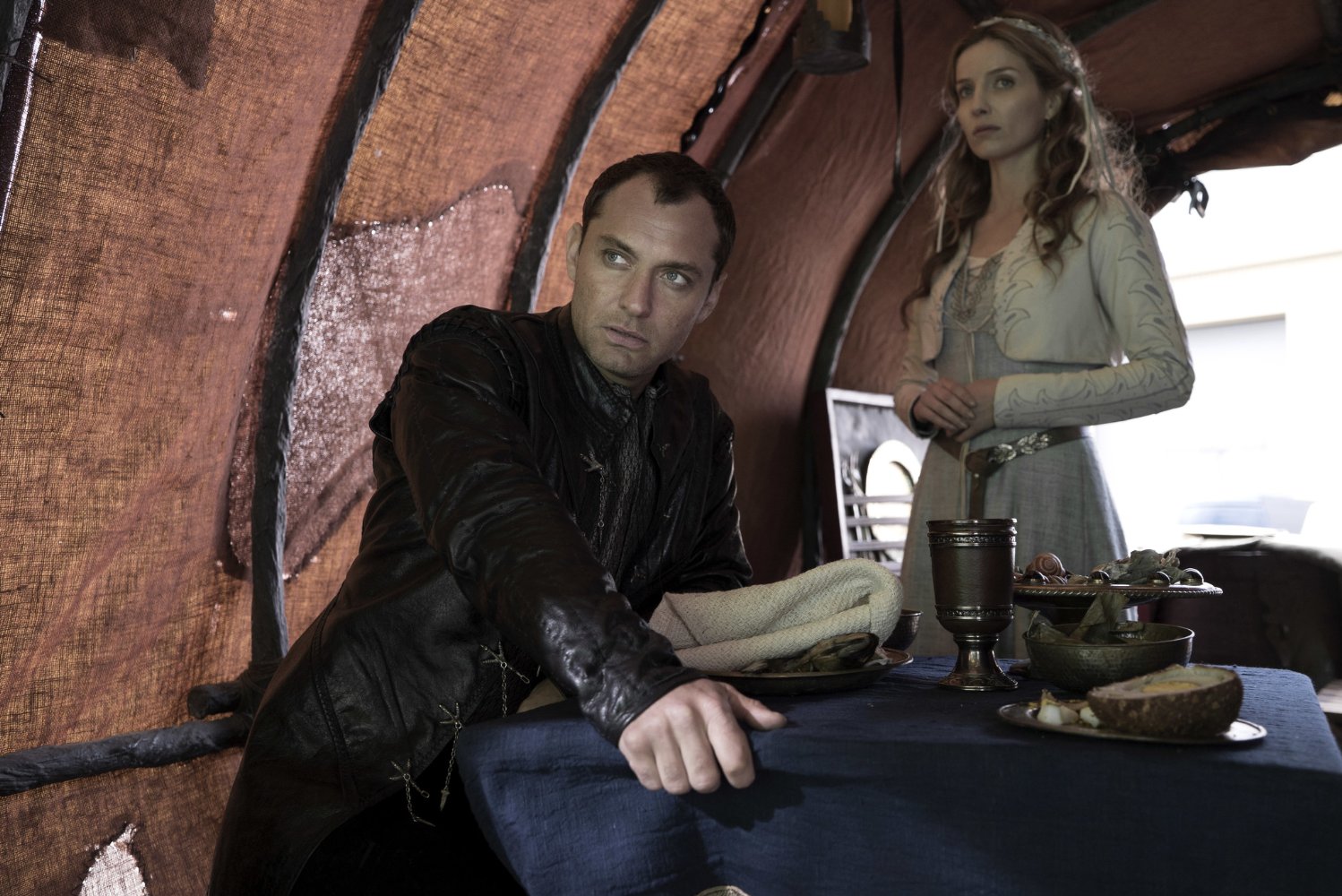 Ritchie has taken many liberties with the legend, picking and choosing various aspects to utilize, perhaps with the intention of holding others back for, what now seems highly unlikely, future installments. So the likes of stalwarts such a Guinevere, Lancelot and Morgana are notably absent, whilst Merlin is only briefly mentioned in passing. Instead we’re left in the company of the likes of Djimon Hounsou’s Bedivere and characters aptly named “Wet Stick” and “Goosefat Bill”, as well as Astrid Berges-Frisbey’s Mage, who being the only female character of note in this thing, isn’t even given the dignity of being granted with a proper character name.

Along with his team of writers, Ritchie has created a sort of medieval superhero origin story. Excalibur, it seems, is not just any sword, but a sword that glows and has symbols and turns into a sort of magical lightsaber weapon that makes your eyes glow and turns the world into a visual, 300 style slo-mo fest allowing Hunnam’s Arthur to lay waste to many a soldier. While it does have the potential to be exhilarating, those sequences are executed with such intensity and smoke and whooping camerawork, that it becomes bloody hard at times to see just what the hell is actually going on. It gets to such a point by the end that the final battle just plays out like the final level of a computer game.

Indeed, a lot of the execution never quite matches up. The extremely high fantasy elements never really gel with the geezer banter and gritty stylings of the Londinium set sequences, and the constant callbacks and intercutting between past and present, as characters recite events and stories to one another, can often leave one feeling frustrated and playing catch up in what should be a fairly straightforward narrative. 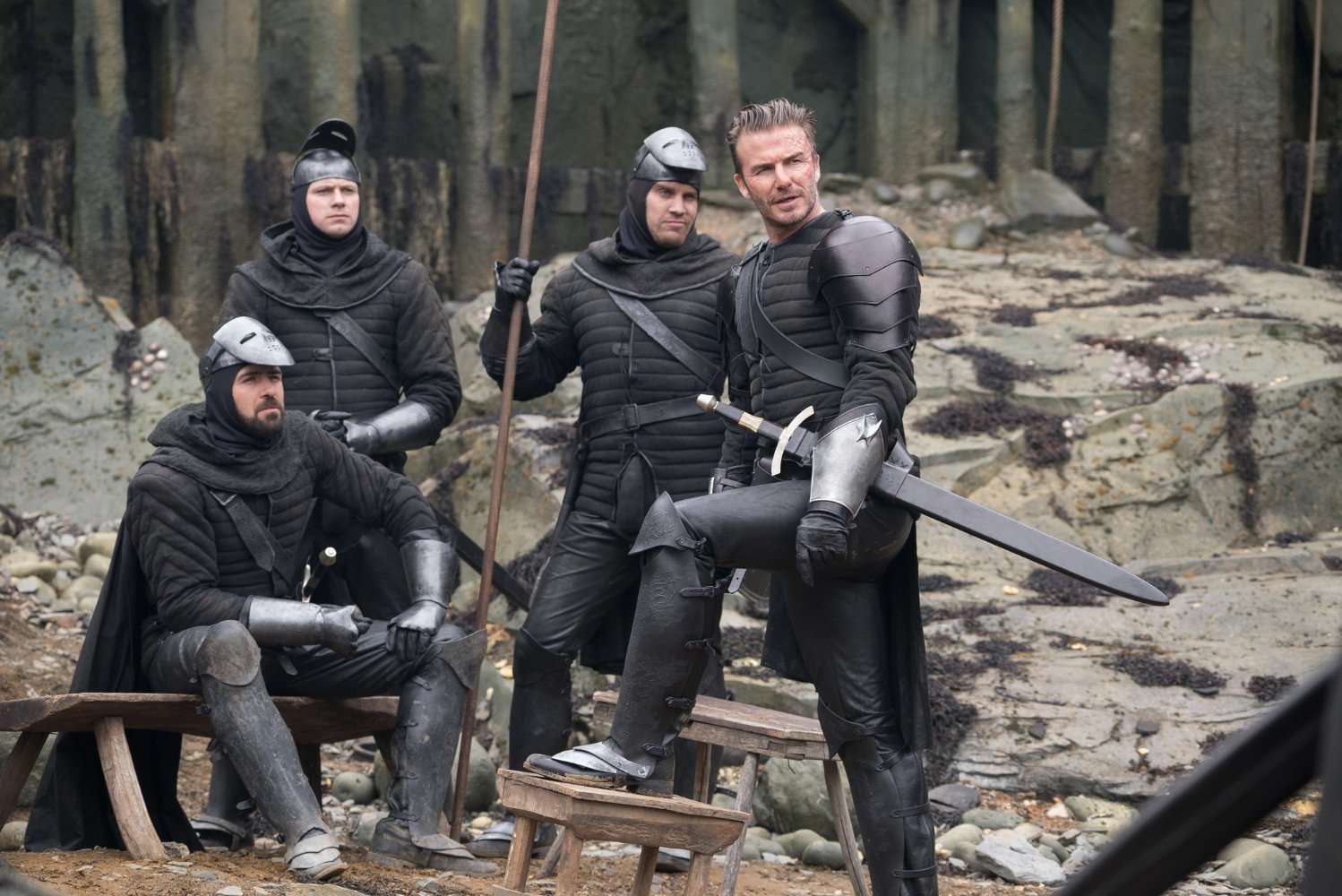 The mythology never quite holds up either. A sequence in the so-called “darklands”, in which Arthur goes on a sort of walkabout involving a flurry of creatures including giant rats and bat like things, is quickly brushed over in a matter of minutes, whilst the backstory involving the war between man and mage is never really elaborated on, leaving the whole thing rather empty and meaningless. Nowhere is this highlighted more than in the actual sword from the stone scene itself. This is a moment that’s iconic in English mythology, a signature moment that deserves intense gravitas yet is botched by the presence of a celebrity cameo delivering such stilted and out of place dialogue that any sense of dramatic weight is ultimately lost.

Hunnam does his best in the lead role, but Arthur himself is simply not that compelling a hero for us to truly get behind. It’s a real shame because, given the right sort of hero, Hunnam could shine.

Overall, whilst admirable and mildly entertaining in its own way, King Arthur: Legend of the Sword is a film that never truly feels like a coherent whole.