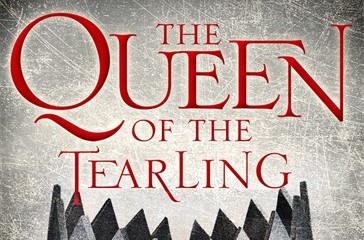 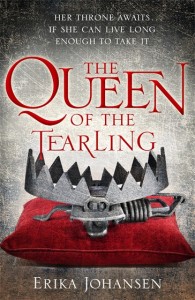 I hadn’t even started the first page of The Queen of the Tearling and yet I felt a certain level of expectation brewing. This was a book that had already signed a major movie deal with Warner Bros and was set to reunite Harry Potter producer David Heyman with actress Emma Watson – all before it had even been published. Erika Johansen, however, does not disappoint. Hers is a debut that shines bright like the magic in her book.

The Queen of the Tearling follows nineteen-year-old Kelsea Glynn, the heir to the Tearling throne that has been claimed by her unscrupulous uncle, the Regent. He has no intention of giving up the throne to his niece and is merely a puppet of the Red Queen, a sorceress shrouded in dark magic and evil in the neighbouring realm of Mortmesne. For eighteen years Kelsea has been in hiding, concealed from the Kingdom and shielded from her mother’s legacy, but she always knew that the day would come where she’d have to return.

On Kelsea’s nineteenth birthday, the remnants of her mother’s guard – each pledged to give their life to protect hers – turn up on the doorstep of her cottage to escort Kelsea back to the Kingdom’s heart. With the help of these guards, Kelsea makes the dangerous journey back to a Kingdom that’s been brought to its knees, as her Uncle, together with the Red Queen and other clandestine forces, attempts to kill her before she can even get near the throne.

After just a few pages I knew that I would fall in love with this story and the characters that inhabit it. Johansen is a writer capable of creating a world as beautiful as it is terrible. Her storytelling captures the imagination so vividly that it’s like watching a film play out in your mind. This is a human race much like our own, where the poor suffer and the rich buy their power and comfort. Johansen wanted to write about an idealistic monarch trying to rectify the errors made by her predecessors and, in doing so, she’s shaped a plot that runs parallel to the problems that plague the current world. This might be fantasy but it feels unflinchingly real.

Johansen’s characters are all flawed in one way or another, and Kelsea is a surprisingly loveable protagonist because of this. She’s not typically beautiful or regal, in fact she lacks almost all the qualities you’d naturally expect from someone of royal blood, but she’s brave and sincere. This is an ordinary young woman thrust into a situation that threatens to drown her if she doesn’t hold her head high enough. She’s a character driven by what’s morally right and wrong, a tough and strong minded heroine who should appeal to readers bored with underdeveloped and superficial female protagonists.

The Queen of the Tearling is a coming of age story that sees a girl growing into a woman and with it, an exiled princess becoming the Queen the people need. Kelsea is guided by male characters that never degrade or overpower her, but aid her quest. From the guards tasked to protect her, to The Fetch and his gang of rogues – who have a distinct Robin Hood and his band of merry men feel to them, the male characters complement Kelsea is a way that allows her to rise up and deal with the harsh realities she’s faced with. It’s impossible not to adore kind and contemplative Pen, or the fierce and feared Mace, who steal the reader’s heart as much as Kelsea herself does.

As the first book in the Tealing trilogy, this will surely put Erika Johansen on the map as an author to watch out for. She could be the female equivalent of George R. R. Martin but chances are she wouldn’t want to be. Like Kelsea, I’m sure Erika Johansen wants to stand on her own two feet as a female writer with the ability to truly enchant the reader. Exciting and fuelled by adventure – this is what all fantasy novels should be like.

The Invasion Of The Tearling – Erika Johansen Review