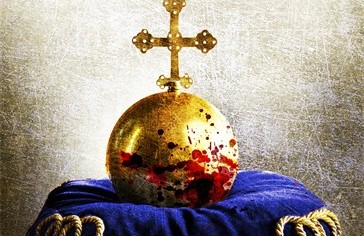 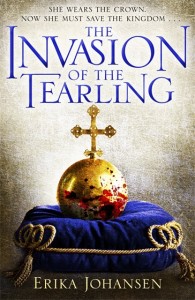 Last year I crowned Erika Johansen’s The Queen of the Tearling my favourite book of 2014. An addictive and enchanting story that entwines the medieval with the modern, it was the fantasy book I’d been waiting for since falling in love with Kristin Cashore’s Graceling in 2008. A year down the line and Johansen’s sequel, The Invasion of the Tearling, has arrived and I’m happy to say that it’s already my favourite book of 2015.

The first novel focused on Kelsea Glynn reclaiming the throne and setting free the people her mother had enslaved. This sequel moves the story along, following Kelsea as she grows into her role as Queen and faces the repercussions of her uprising. By stopping the slave shipments to the Red Queen in Mortmesne, Kelsea has not just broken the treaty, she’s also opened her Kingdom up to the terrible wrath of the rival Monarch who’s been waiting for a reason to invade.

As the Mort army grows closer and Kelsea’s own defences crumble, she’s unwittingly pulled into another woman’s story, a woman named Lily who lived before Kelsea’s world even existed. Throughout the book we move between the past and the present, jumping from Kelsea, an unlikely Queen who’s struggling to be the Ruler her people need, to Lily, a downtrodden housewife who’s slowly discovering that there might be a better world than the one she inhabits. Despite being separated through space and time, Kelsea and Lily become unexpected allies, even if they don’t fully realise it.

Lily’s story may initially seem fragmented, but stick with it…the connection between the two characters is slowly divulged as each woman struggles to rise up against very different but equally formidable adversaries. It’s through Lily’s story that we gain a better insight into the past, where Kelsea’s forefathers sailed away from a dying land in search of a new, untainted realm free from modern technology. In many ways, this becomes the more intriguing of the intertwining narratives, even though Kelsea is, and will always remain, the story’s heart.

“There’s a better world out there. So close we can almost touch it.“

Johansen is brave to deviate from The Queen of the Tearling structure and take the reader so far from Kelsea for such large chunks of time. It’s a move that works though, allowing the first book’s mythology to develop and evolve. Invasion is a darker and more intense offering, expanding the Church’s involvement in Kelsea’s ongoing struggle, as well as the magic that Kelsea briefly experienced through her jewels. There are shades of Lord of the Rings here, with Kelsea unable to part with the magical objects that are starting to alter her appearance as well as her temperament. I half expected her to utter “My precious” at any given moment.

Introducing Lily means we don’t spend quite so much time with the Red Queen, a crying shame as she’s such a fascinating character. At once terrifying yet vulnerable, the mysterious Monarch’s true identity has been something we could only guess at until this book came along. Finally we discover who she is and it’s a revelation that doesn’t disappoint. Her unwavering fury and vengeance is truly something to look forward to as the story continues.

Kelsea’s relationship with her Queen’s Guard is still very much one of the most enjoyable parts of the story, but we aren’t treated to many moments with the entire gang. The scenes with Kelsea and her valiant protectors are heartwarming and humorous, particularly the moments between Kelsea and The Mace, who’s been a star character since the beginning. Pen also seemed short-changed but perhaps it’s simply because he’s such a loyal and loveable character that he’s so sorely missed when he’s not around.

Regrettably, we don’t get much time with the Fetch and his merry band of men either, but chances are they’re being saved for the next book. Johansen is careful not to give away all her secrets at once and there’s a sense of holding back the really good stuff; Invasion definitely feels as if it’s the build up to an epic conclusion.

My only criticism – and it’s not really a reproach but rather something I’ve been pondering – is the change in Kelsea’s appearance. Johansen wrote an article last year talking about the importance of “ugly” heroines in books. Her decision to alter Kelsea’s physique is at odds with her belief in strong female characters that aren’t elfin beauties who look divine in skin-tight leather. It doesn’t take away from the story but it does feel somewhat forced, almost as if this second book was paving the way for Emma Watson’s role as Kelsea in the big screen adaptation.

Regardless, The Invasion of the Tearling is a stellar follow-up to an impressive and imaginative debut. It’s the perfect blend of fantasy and adventure, with a smattering of multi-dimensional sci-fi to make it the ultimate genre mash-up. If you liked the first book, you’ll love the second.

3 Graphic Novels To Fill Your Summer