‘I Know Who You Are’

This week’s episode of The Flash is all about the power of punctuation as Barry Allen (Grant Gustin) finally learns the identity of Savitar. As the title ‘I Know Who You Are’ suggests, there are no more red herrings or fake outs. This is it. The identity of the big bad is revealed.

But, like the episode whose effective use of a little flash-forward keeps us hooked, the reveal will have to wait as we need to discuss the events leading up to the big reveal. The premise is simple: after last week’s future-Barry gave normal-Barry Doctor Tracy Brand’s (Anne Dudek) identity, Team Flash race to find and protect the good doctor before Killer Frost (Danielle Panabaker) can kill her.

As a new character and possible future member of Team Flash, Tracy Brand is a mixed bag. She never outgrows her collection of quirks, but Dudek gives a strong enough performance to make her engaging. The character is at her strongest when she is giving HR (Tom Cavanagh) some drive. For too long the show has been content with using HR to deliver some much needed comic relief and Cavanagh has willingly played the goofball. In ‘I Know Who You Are’ HR develops a crush on Tracy, and the actor gives a great comic performance that deepens his character. It is now clear the goofy charm masks his insecurities. 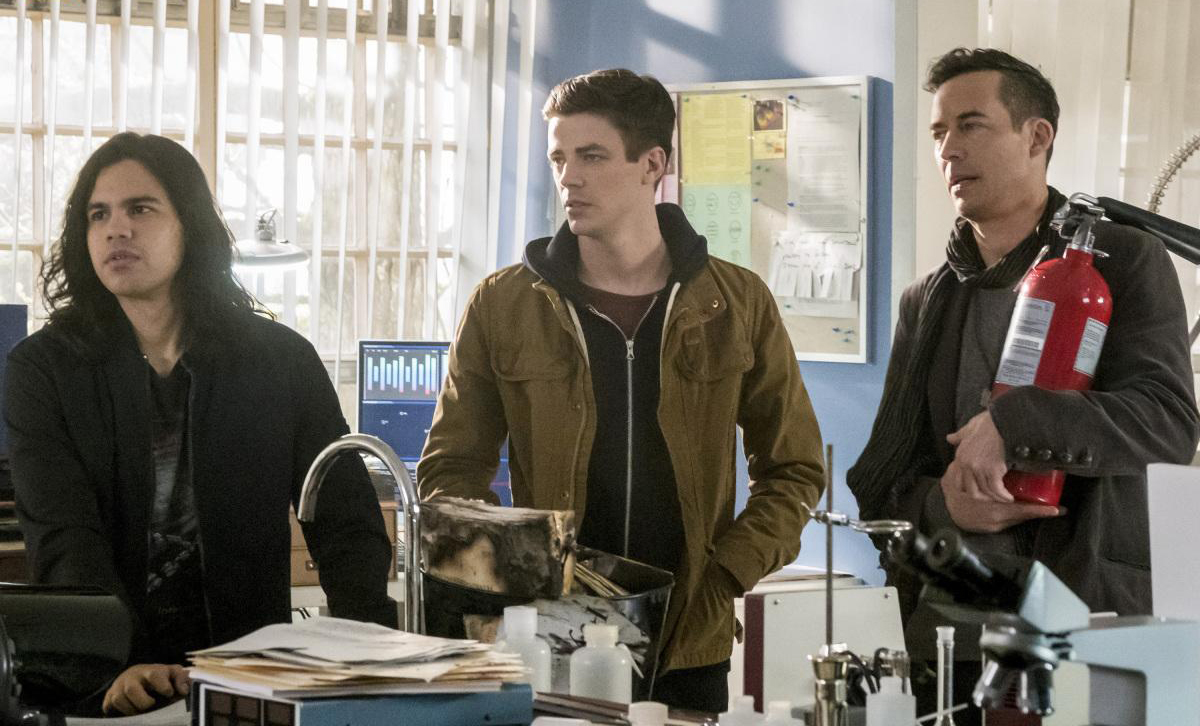 Not settling for one father figure having a love life, the show also has Detective Joe West (Jesse L Martin) and Cecile (Danielle Nicolet) ramp up their relationship. Everyone’s favourite cop is uncertain about what his future holds and Martin obviously handles the material well, it’s just that he has to essentially repeat the same scene against another actor. For an episode with a major denouement, you can’t help but feel like the episode is stalling.

This going-through-the-motions feeling also appears in the multiple awkward scenes where Cisco (Carlos Valdes) and Julian (Tom Felton) argue about how to deal with Killer Frost. Valdes does a solid job at telegraphing Cisco’s shock and his gradual realisation of how far he might have to go to save his friend, whilst Felton is forced to cringingly say “mate” a lot to remind the audience he’s British. The actor can easily manage nuanced material so it’s a shame the writers have reduced him to an exposition machine.

As for Killer Frost herself, Panabaker continues being a droll campy delight as Caitlin’s alter-ego. Frost is such an engaging villain she shows how boring Savitar is. The scenes where she uses her intelligence instead of her sheer power are some of the best The Flash has ever done, and the actor is clearly having fun in the role. But, the show is rushing through her material and as a result, her powers are ill defined and just suit whatever the episode needs. Need an awesome action scene: ice slide. Need to create tension: random coffee cup freezing from miles away. It feels contrived and is a shame because The Flash is often at its best when it creates drama out of its characters’ limitations.

Now, this review is going to end on a The Flash-style fake out. It isn’t the right time to reveal Savitar’s identity because it’s a major spoiler. It does fit the overall themes of this season and it raises a lot of questions. The reveal will be dissected next week, as we wonder what is in store for the future Flash.