‘The Once and Future Flash’

If you had the chance to see your future, would you take it? And, what happens if you don’t like what you see?

Those are the questions most time-travel stories deal with, whether it is Marty McFly in Back to the Future 2 or Amy Adams in Arrival, the future is always on a time traveller’s mind. They are also questions The Flash gleefully ignores as Barry Allen (Grant Gustin) runs to 2024 in an attempt discover Savitar’s identity.

Naturally, the future is not bright. In this future Iris (Candice Patton) is dead, Team Flash has disbanded and Barry is stuck in a mopey malaise signified by a greasy fringe that would make most moody teenagers proud. In more than any other episode, the work of the set and hair & make-up departments really shines through, as they reveal new facets to the sets and characters we’ve spent almost three years with. The simple changes like Barry’s fringe, Joe’s (Jesse L Martin) glasses and the debris filling S.T.A.R Labs really help visually inform how dire things become after Iris dies.

And, Barry being Barry with an aw-shucks attitude to heroism can’t leave without performing a Take That and holding a reunion. The episode skilfully balances its hopeful reunion plot with the sporadic revelations as to why the team disbanded in the first place. Barry has to come to terms with what his future self may do, and the scenes where Gustin acts off himself are some of the most interesting. He may only scowl in the future, but the actor is good enough to show how past-Barry sows the seeds of optimism in his future counterpart. 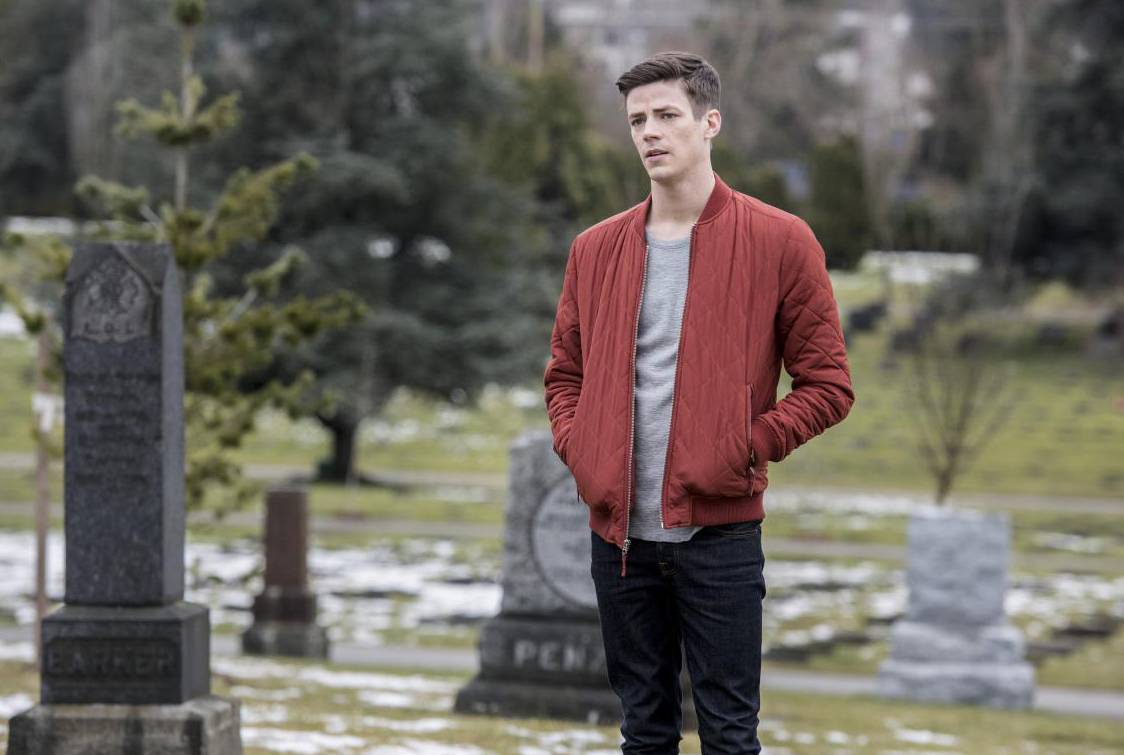 A lot of this nuance is because DIRECTOR Tom Cavanagh is so in-tune with these characters. As someone who has acted as multiple versions of one character over three seasons, he has needed a deep understanding of this universe, and the actor brings this knowledge behind the camera. He knows the characters trump the spectacle and he uses small character moments to finesse the broad strokes found in ‘The Once and Future Flash’. He balances out 2024’s almost too parodic doom and gloom with a fist bump between Barry and Wally (Keiynan Lonsdale) that encapsulates their Padawan relationship

These moments help lead up to a rousing finale as Barry faces off against the Mirror Master (Grey Damon) and Top (Ashley Rickards). The Rogues don’t have much to do here except be menacing and are completely tangential to the plot, but the special effects in this final fight recreate the kaleidoscopic effects seen in blockbusters like Inception and Doctor Strange on a TV budget. It is a staggering action scene.

Yet, when all is said and done, the episode leaves you a bit empty. Much like the previous episode ‘Abra Kadabra’, it delivers false promises. Barry’s trip to the future is a side dish disguised as the main course; the events don’t impact Barry, he is no closer to finding out Savitar’s identity and the reunion plot is detrimental to heightening the stakes now we know everything will work out relatively okay. So, ‘The Once and Future Flash’ finishes as a fun but pointless hour of television.