We need to talk about Iris (Candice Patton). For The Flash’s entire run Barry (Grant Gustin) has defined Iris. Over the three seasons, her arc has seen her go from unrequited (sorta) love interest to the girlfriend, but however much the writers and Patton try to twist things, Iris always exists in relation to Barry.

As she isn’t super smart or super fast, her role in Team Flash is about making sure Barry is emotionally okay. Her journalism job gives her some agency, but it exists so Iris can be in danger and the Flash can save her. After processing her knowledge of the future, in ‘Dead or Alive’ Iris wants to change the rules, and do things without the eponymous hero.

As a cute Lego reenactment reminds us, the latter half of season three has turned Iris into a major damsel in distress. Every episode will be in some way about saving her. However, a possible endpoint means we need to relate to her beyond Barry. She has to become an individual character. With the Flash taking a backseat in ‘Dead or Alive’, Iris can grow. She believes her future is set and she has developed a newfound recklessness. As other characters try stopping her, she learns why she puts herself in danger.

Patton gives her best performance. Through her line delivery, we understand how vulnerable Iris feels and why she is taking on arms dealers. With limited time left, she wants to leave a mark on this world; she wants to be more than the Flash’s girlfriend. It’s just a shame the writers once again undercut Iris’s individuality by having Wally (Keiynan Lonsdale) save her, but it is a small piece of vital growth. 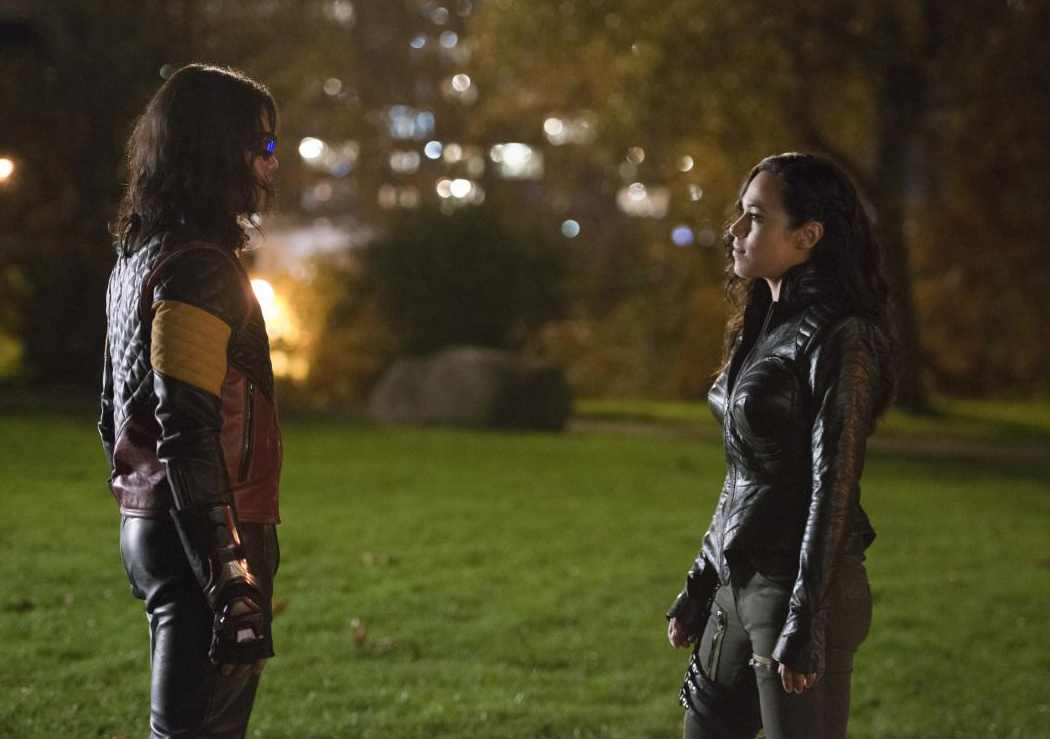 Cisco (Carlos Valdes) has to fight to the death. If the sudden change of topic is jarring, imagine watching ‘Dead or Alive’. The writers struggle to blend the episode’s two storylines, and at points in the narrative, Cisco will just demand attention reverts back his storyline.

Cisco, protecting HR (Tom Cavanagh), is in a trial by combat with Gypsy (Jessica Camacho). Gypsy has vibe powers like Cisco and is an inter-dimensional police officer. She has travelled from Earth-19 to arrest HR, as his dimensional jump to our Earth is illegal. Look, it’s heavy-handed science fiction, with the show’s matter-of-fact approach grounding the story and letting us focus on the emotional stakes.

The Cisco-HR relationship is the inverse of the relationship Cisco shared with the other Wells’. They were his mentors, where as, with HR, he is the mentor. Cisco wants to protect HR because he needs him. The Flash has always been good at making its characters important to the team. HR is useless, but his ideas help inspire Cisco. He has a role to play, as does new member Julian (Tom Felton). The former Dr Alchemy is the pessimistic member, and Felton mines humour out of his negative asides. It’s a shame Felton’s gone from playing the obnoxious, arrogant villain to the sardonic, socially awkward teammate. In a couple of episodes, he has played the two stereotypes Hollywood has for British people.

The Flash’s strengths come into play in the actual fight. The show always succeeds at creating superhero spectacle on a tiny budget as the characters zap between dimensions. Cisco’s flirting adds some levity and it’s pure Silver-Age magic. Meanwhile Camacho makes the most of her short screen time and you want to see her again.