‘Acceptable Losses’ was a brilliant episode of television, providing audiences with plenty of conflict and power plays as the plot edges ever closer to the inevitable war over Shallow Valley, as well as plenty of strong character beats too as relationships are tested, strengthened and fractured beyond all repair. Between the ever-growing chasm between Bellamy and Octavia, Madi’s integration into Wonkru, and Echo and Raven being at odds over how best to complete the mission Echo’s been sent to do, ‘Acceptable Losses’ quickly proves itself aptly named when it comes to weighing up the sacrifices that need to be made in pursuit of the greater good – and it’s an episode that offers a prime example of why this series makes for such compelling television.

For the majority of the episode, there are two major plots at play: Echo’s attempts to complete her mission to take down the Eligius prisoners’ eye in the sky over in Shallow Valley, and everyone back in Polis waiting for her to be successful, planning their next steps all the while. Each storyline has its own moral and ethical quandary over what is considered an acceptable loss to weigh up, with Echo facing the question of whether her end goal is worth risking her friendship with Raven, while Octavia, Bellamy and Clarke all disagree over Wonkru’s battle plans and the risks they pose to innocent lives.

In Octavia, Bellamy and Clarke’s case, this isn’t a particularly new conundrum, and that is a fact that Octavia is quick to point out when they object to her plan to weaponise the man-eating worms of ‘Shifting Sands’ to kill everyone in Shallow Valley before claiming it for Wonkru – Echo, Raven, Murphy, Emori, Kane and Abby included. In Octavia’s words, killing their friends and loved ones is an acceptable loss if it means they can survive instead, and her decision to do so is nothing that both Bellamy and Clarke haven’t done before, several times over. Octavia is trying to save her people, which is a justification used by Bellamy when he killed an army of 300 grounders sent to protect Skaikru in season three, and by Clarke over and over again, not least in killing everyone in Mount Weather in season two.

As an audience, it’s hard to not justify Octavia’s actions when they lay out the memories of seasons past in front of you like that; her transformation into Blodreina may seem extreme and drastic, but at her core Octavia is a leader, making exactly the same calls that Bellamy and Clarke both made in their own stints as ‘leader’. The difference with Octavia, however, is that she seems to have lost that real-world grounding that the other leaders of the series had, surrounded as she is by an army devoted to her and to Wonkru. Only Indra is willing to call out Octavia when she goes too far, telling Octavia to be careful of the call of the dark lest she lose her way. But it falls on deaf ears and at the end of the episode, Octavia takes great pleasure in taunting Clarke over her decision to make Madi her second in the upcoming battle, potentially sealing her own fate as she does so. 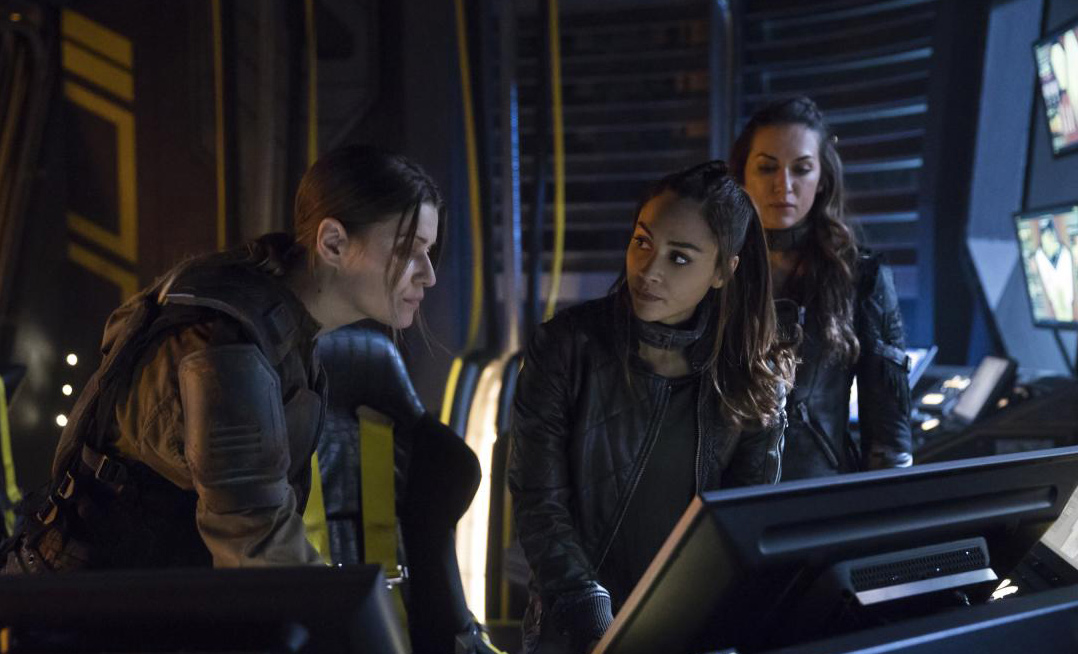 Over in Shallow Valley, meanwhile, Echo proves that even after six years in space she will always be the spy she was trained to be, making decisions based on their strategic outcome rather than considering any emotional ties she may have. Despite initially hoping they could trust Shaw to help them take out the satellite watching Wonkru’s every move, when he refuses to help and Raven refuses to sell out the one friend they have here, Echo decides to give him up herself, telling Diyoza she has a traitor in her camp anyway. It works, and provides enough of a distraction that she’s able to insert the thumb drive and give Monty control of the eye in the sky, but in doing so Echo betrayed Raven, and condemned Shaw to a life as a prisoner with a shock collar of his very own too.

“There are times in war when you have to do the wrong thing for the right reasons,” Echo tells Raven earlier in the episode, pre-justifying her actions in the name of the greater good, but it’s also a line that any character of The 100could have said at any point during this show’s run, and the show knows it too. ‘Acceptable Losses’ was full of throwbacks to seasons gone past, from Diyoza challenging Kane on his own past decisions – like sending 100 delinquents to the ground – to Clarke finally giving Monty the note from Jasper that she found in Arkadia in the days after praimfaya in the season five premiere. But, it also used those callbacks to mark a turning point for the series too as Clarke, Monty and Bellamy are left considering a plan that could avoid all-out war – but the only way it could work is if they agree that taking out Octavia would be yet another acceptable loss for the greater good.

The airing of this episode officially takes The 100’s fifth season over the halfway point, and it predictably shows no signs of slowing down in the build up to the big finale. Seven episodes in, and this week reminded us that there is still a lot we don’t know about Diyoza and Shaw’s past, as well as the Eligius mission and the mysterious space illness affecting 75% of Diyoza’s people – and that’s before seeing the Kane and Abby tension reach a head and dropping the bombshell that Diyoza is pregnant, which has presumably been written in mainly to provide another moral dilemma later down the line when our leads are given a chance to kill their enemy and have to consider the innocent life she’s carrying too.

Each episode to date has been so well-crafted and compelling that it isn’t until you stop and take a look at the season as a whole that you realise the overall plot has been teased out wonderfully slowly, building in plots and subplots with ease and intricacy. We’ve ticked off a lot of the plot points raised in the official season five trailer now, so by the end of ‘Acceptable Losses’, it feels like we’re heading into real unknown territory – which makes the thought of the remaining six episodes all the more exciting.