If the first three episodes of The 100 season five were spent carefully putting the pieces into play, then there’s no doubting that episode four, ‘Pandora’s Box’, has officially put the game into motion. With the opening of the bunker, there are no more loose plot threads to check in on once an episode or so, and instead every volatile element, character and ideology introduced in the series so far is now given the chance to interact with each other in new and interesting ways, and cause season one-era Bellamy Blake’s favourite thing in the process: a little chaos.

For the characters, this means the war for Shadow Valley is on, prompting betrayals and good and bad decisions made in the heat of the moment as the survival instinct on all sides kicks in once again. But, for the audience, it means another brilliant hour of television that walks the line between action and tenderness effortlessly, balancing tension, drama and danger with some incredibly powerful emotional beats to boot.

Which brings us nicely to the second half of the reunion that was teased last week when, having struck his deal with Diyoza and survived a death threat from McCreary, Bellamy and Clarke finally get a moment together to reflect on the revelation that they’ve both survived and found each other once again. It’s not long before they slip back into their old, co-leadership ways, with Clarke’s first thought being, as always, for her people – or in this case Madi, and then the rest of their people in space – even if it’s a little telling that it’s Bellamy who reminds her about Echo and Emori being part of the Spacekru too. Bellamy counts them as his people now, but Clarke is a little more distanced from them.

In just giving Bellamy and Clarke a moment to reflect on the other’s being alive, the show also provides an opportunity to point out just how comfortable Bellamy now is in the position of leader. Last time these two were alone in a room together, Bellamy didn’t know how to lead without Clarke by his side – “I’ve got you for that.” – and now he’s striking deals, holding leverage and being the one to find a way to co-exist with the enemy, as Clarke is taken out of the equation altogether in recovering from her torture in a side room. Crucially, however, the respect is still there and the strength of their bond is already palpable to others once again – “the hostage taker and his girlfriend”, anyone? 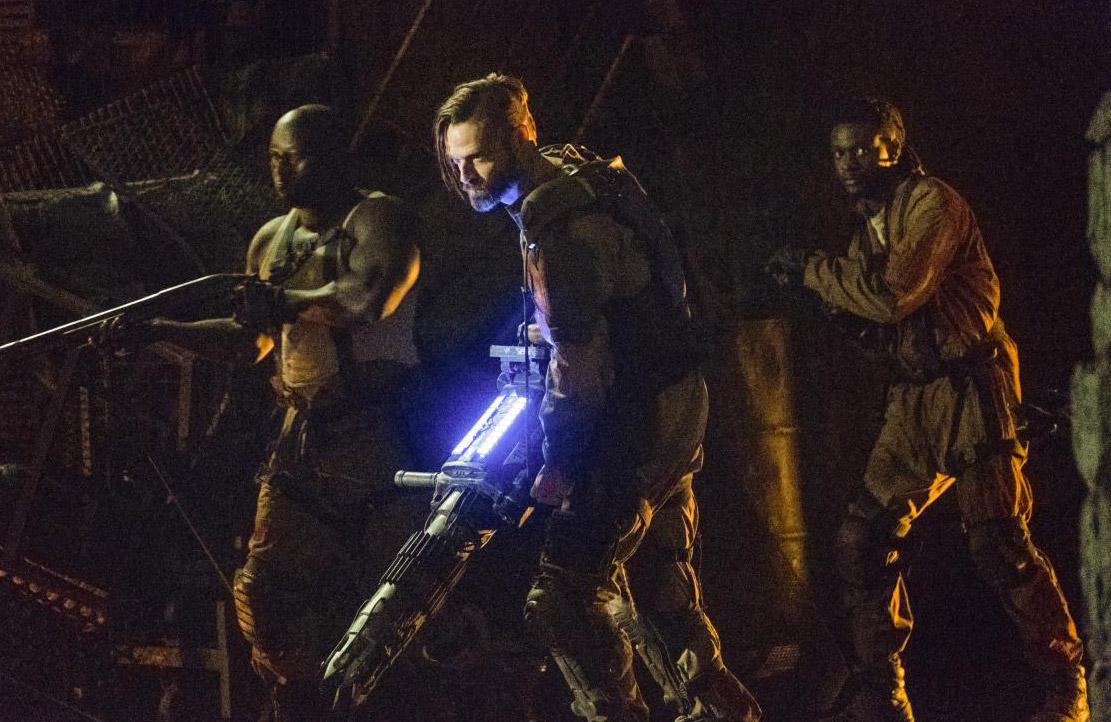 But still, the deal Bellamy cut helps pave the way to open the bunker, giving the elder Blake another hero moment as he comes rappelling down from the heavens and spares Kane the death Octavia was about to give him for speaking out against Wonkru and their vengeance-seeking fight to the deaths that masquerade as justice. For the briefest of moments after Bellamy’s arrival, Octavia is a little sister again, overcome with emotion at the sight of her big brother as she throws herself into his arms. Only for a moment, though, as Clarke doesn’t get the same show of gratitude, just a greeting of acknowledgement, and then Octavia becomes Blodreina again – a leader suspicious of these newcomers and their intentions, and with a bunker full of 814 people looking to her for a sign of what to do next.

Of course, what comes next is war, with Diyoza working against her deal with Bellamy, trying to take Raven and Murphy out of the equation and staking her claim on the valley the second Bellamy loses his leverage. What we’re left with is something akin to hell on earth – all the evil things being let loose into the world from Pandora’s Box and leaving a little thing called hope behind. Raven and Murphy are trapped on Eligius IV in space, having woken up 283 murderers to ensure their own survival while Diyoza and her crew are preparing to zip up into space to pick them up for their own gain. Abby and Kane, too, have given themselves over to Diyoza, who needs a doctor, to protect themselves from Blodreina and Wonkru, while Octavia, inexplicably, blames Bellamy for everything that went wrong.

The 100 has been to this hopeless place before, but now more than ever it’s difficult to guess how our main characters can fight back against an enemy that is so much more ruthless, devious and powerfully well-armed than any they’ve come across before. Which is, of course, all part of the fun. Between all the strategic knock-backs, tense reunions and the admittedly few moments of light relief, The 100 is also building up a mystery here in the form of the history of Eligius IV, the question over Eligius III and in Diyoza herself, war hero-turned-terrorist who was the most wanted criminal in the world at the time of her arrest. In all it makes for Diyoza being a fascinating antagonist, not least because we understand where she’s coming from – she’s just trying to do the best for her people, and that’s something we’ve most definitely heard before.

A few days before this episode aired in the US, showrunner Jason Rothenberg tweeted out a Kurt Vonnegut quote about Pandora’s Box: “They gave Pandora a box. Prometheus begged her not to open it. She opened it. Every evil to which human flesh is heir came out of it. The last thing to come out of the box was hope. It flew away.” Clearly, then, The 100 is preparing to go darker than ever this season – and the series is all the better for it.