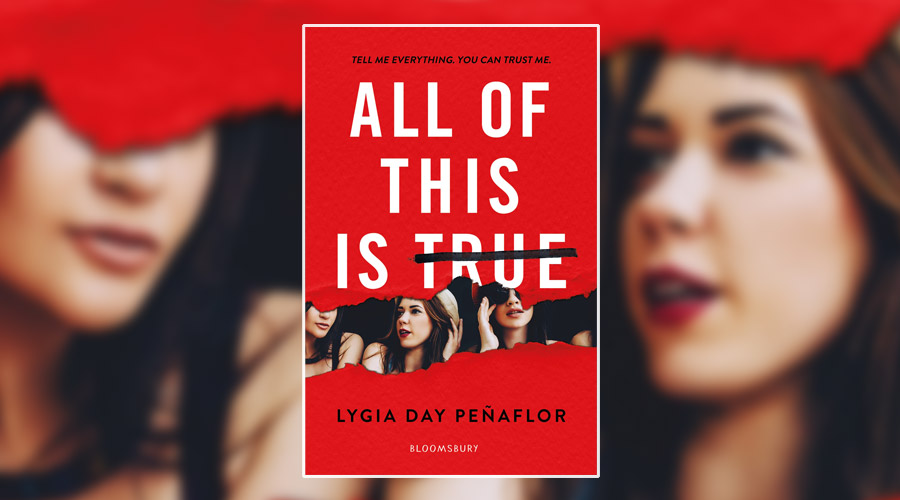 When Long Island teenagers Miri, Soliel, Penny and Jonah meet elusive author Fatima Ro, they’re infatuated with how effortlessly cool and philosophical she is. Sticking around at the end of a book signing, the teens befriend their idol and are stunned when she invites them into her eccentric, artistic life. Fatima seems just as fascinated by these four privileged teens as they are by her, and she becomes something of an intellectual guru and life mentor to them. It never once crosses their minds that this ‘friendship’ might not be real, or indeed appropriate.

The teens confide their deepest secrets, fears and desires with Fatima, as she in turn quietly and surreptitiously manipulates their behaviour, opinions and feelings. Cut to a year after they first met her and Fatima’s newly released YA novel has thrown the teens’ lives into chaos. With regular extracts from her book, it becomes obvious that Fatima didn’t just use the teens as inspiration for her novel; she based the entire plot on their lives. All four teens are flung into the spotlight and Fatima simply disappears, leaving them to deal with the fallout alone.

Utilising the epistolary format, Lygia Day Peñaflor takes readers into the lives of contemporary teenagers who are obsessed with celebrity culture. Told through interview transcripts, emails, published journal entries and book extracts, it’s revealed just how much Fatima’s approval meant to the teenagers and how their desperation to please her ultimately led to tragedy. They were willing to sacrifice pieces of themselves, and each other, in order to get closer to their idol, but they never stopped to question why a successful author might be so interested in them.

“You can’t hug a lion and then be surprised when he bites you.”

Right from the beginning, the lines of fiction and reality are blurred as the teens react to Fatima’s deceit in different ways. Miri staunchly defends the author, continuing to champion her cult-like fan club, whilst Soliel retreats into her own creative outlets, publishing her journal entries online as a way of sharing her personal hurt with the world. Meanwhile, Penny broods on Fatima’s betrayal of them all, and Jonah, well, it’s never entirely clear how he feels. But why exactly that is, you’ll have to read the book to find out.

We don’t know much about the teens before Fatima walked into their lives and that can be frustrating if you like lots of character depth and development. Instead, the four characters are defined by their respective relationships with Fatima and how they respond to her betrayal and subsequent abandonment. As for Fatima, she remains an even more ambiguous and complicated character to engage with because we only glimpse her through the eyes of the teenagers, who saw her from a hero-worshiping perspective. It’s in every way a realistic and observant representation of our cyber culture and how celebs can be moulded to fit fans’ ideas of who they really are.

Epistolary novels are often difficult to get into and All Of This Is True is no exception. The story plays out like a slow burning puzzle, with every email, extract and transcript offering up another sliver of the whole picture. By the end, you’ll be full of questions about Fatima’s motives and how much she actually cared about the four teens she treated like characters to manipulate and mould. With its smart blend of teen drama, privilege, obsession and tragedy, All Of This Is True will appeal to fans of We Were Liars and Gossip Girl, where secrets never stay buried and the truth isn’t always clear cut.