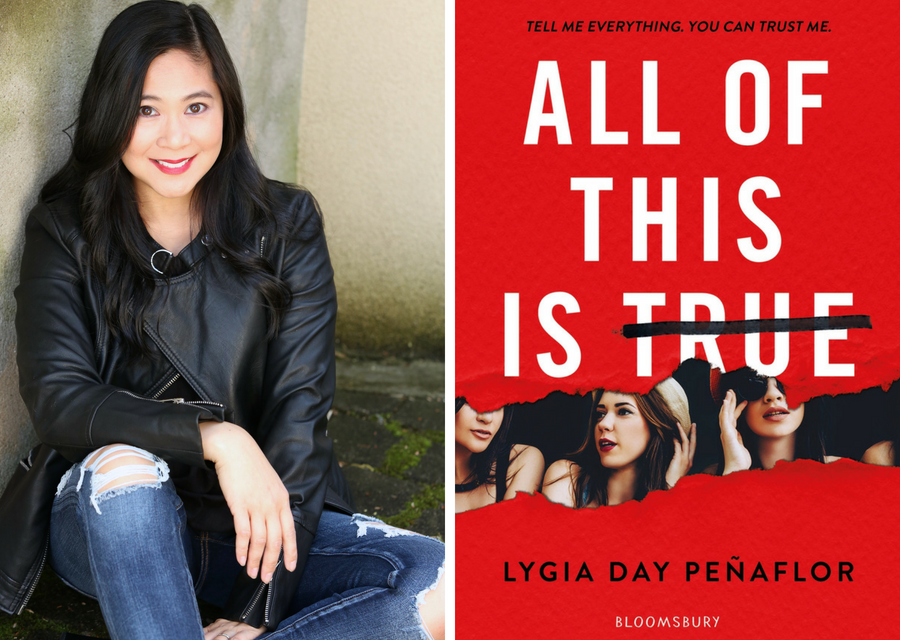 Murder, mystery and missing people: 10 crime and thriller books that will keep you on the edge of your seat

Lygia Day Peñaflor’s YA novel All of This Is True is a story of obsession, betrayal and forgiveness that blurs the lines of fiction and reality. To celebrate the book’s publication at the end of last month, we caught up with Lygia to talk teen culture, celebrity obsessions and her writing process.

All Of This Is True takes readers into a world of contemporary teen culture that’s obsessed with celebrity – how much did you draw on your own experience working with Hollywood stars?

I’ve been working in the film industry for twelve years and have witnessed a lot of fanatical behaviour, so that informed me on how far fans will go for their favourite celebs. When I worked on the set of Gossip Girl, there were kids from local private schools who regularly cut classes to watch us film on the streets of NYC. One girl used to buy the designer clothes from each episode. She’d visit us on location and flaunt her new outfits—pieces that “Serena” or “Blair” had worn on the show the week before. Style often plays a big part in celebrity culture, and that’s reflected in All of This Is True.

The story unfolds through interviews, book extracts, emails and published journal entries in a way that blurs the lines of fiction and reality. Was that your intention from the beginning?

Yes. I want readers to question everything. Who is Jonah? Do we ever really know him? Who is Fatima? What were her intentions? And did she create something beautiful or terrible?

Was this epistolary format an easy way of writing or did it pose challenges?

This format definitely kept me engaged because I had to switch voices and perspectives. But it was very difficult to keep track of the timeline and hard to revise. If I changed a detail in one character’s narrative, I had to change it in all the other sections, as well.

Each of the characters are defined by their relationship with Fatima and how they respond to her betrayal – which is your favourite character and why?

I admire and dislike qualities in each character: Miri’s conviction is both impressive and frustrating. I love Soleil’s open heart and Penny’s honesty. Jonah is sweet, but in many cases, bravery is more important than sweet. And Fatima, well, she’s awful and fascinating and desperate all at the same time, and that makes her so interesting to me.

Fatima is an ambiguous and difficult character to engage with because she’s only shown through the eyes of the teens – was that intentional? Does it speak to celeb culture and how fans create a certain image of their idols that’s not necessarily fair or true?

Yes. Fans attribute qualities to celebrities based on their art, their looks, and their public personas. Those qualities may or may not be accurate. That’s why it’s dangerous to have celebrities as personal heroes or idols. It’s fine to appreciate someone’s work, but don’t mistake the image or the art for the person.

The story has definite Gossip Girl, 13 Reasons Why vibes – if it was adapted for screen, do you have a particular actor in mind for Fatima?

I have a short list in my head for Fatima. The right actor would have to be smart and sly—someone with a glint in her eye. But she also needs to be warm and vulnerable. That’d be a challenging role.

What do you hope readers take away from your book?

My goal was to present a story, to say, ‘here’s what happened’ or ‘here’s what didn’t happen.’ Readers will take their own messages from it depending on their needs and experiences. I realize some readers are frustrated. They want to know, “What’s that author’s message?” in order to determine their own feelings about the book. But my task was to tell the story. It’s not for me to say what it should mean to them.

How long did it take to write All of This Is True?

It took me about 11 months to finish a clean, complete first draft.

What was your favourite part to write?

I pretty much wrote this manuscript in order from beginning to end, so it was refreshing for me whenever I hit Fatima’s novel excerpts. It was a change of pace to write in third-person as opposed to first-person journals or interviews. I also enjoyed writing Penny’s little punch lines. She’s very earnest and doesn’t mean to be funny, but she is.

And what was the hardest part to write?

The first draft in general was very difficult. I wanted to write cleanly, which meant I edited as I drafted. That’s a painful way to write when you’re staring at your word count. The numbers never seemed to change! I felt like I wasn’t making any progress.

What’s your one piece of advice for aspiring YA authors?

Finally, what books are on your bedside table right now?

I’m currently reading Your Own Worst Enemy by Gordon Jack. It’s a very, very funny YA about a high school election. The tagline is “When they go low, we go slightly lower.” Isn’t that hilarious? I just finished The Looking Glass by Janet McNally. What a beautiful book! It’s about a ballerina who searches for her missing sister. The writing is lovely. The author is a dancer and poet, and it shows. Awaiting me are White Rabbit by Caleb Roehrig and The Strange Fascinations of Noah Hypnotik by David Arnold. I’m really looking forward to those. And this one is not on my nightstand yet, but there’s a paperback of Bonfire by Krysten Ritter on its way to my mailbox. Cannot wait!

Murder, mystery and missing people: 10 crime and thriller books that will keep you on the edge of your seat

Book Review: All Of This Is True by Lygia Day Peñaflor