It’s Niylah who manages to sum up The 100’s ‘Red Queen’ the best when she reflects that “when hell breaks loose, it breaks loose fast” – and hell breaking loose is putting what happens in this week’s episode lightly. After last week’s premiere was spent largely easing us back into this post-praimfaya world through Clarke’s journey towards Eden, episode two came out fighting, taking us literally deeper into a darker, bloodier and more violent reality as the series catches us up on how the bunker became the gladiatorial thunderdome teased at the end of last week.

And of course, it all centres on the Red Queen herself, Octavia Blake – conclave champion, not-quite commander and reluctant leader. At the beginning of the episode, 46 days after praimfaya (so roughly about the same time Clarke is making her ill-fated trip to Polis), Octavia’s grasp on leadership is less than stable, not least because, as she told Bellamy in the season four finale, she is not a leader. In Octavia’s own words, she’s a fighter and she’s a warrior, but she’s never been accepted as either a Sky Person or a Grounder, so how can she hope to unite them as Wonkru?

Well, to no one’s surprise, she can’t, with Wonkru quickly breaking down into its original clans as they try to protect their own and enact their own version of justice even as Octavia is determined not to repeat the mistakes of the people who came before her. But, as Gaia summarises, without a true commander to unite them, everyone in that bunker are just warring clans, so of course it becomes a powder keg, set to explode when they learn the tower has collapsed on their door and they can’t get out again. And explode it does, in ruthless, blood-soaked fashion.

This episode has a lot going on, but The 100 manages it deftly, tying together characters, development and storylines more or less seamlessly as it paves the way for the new society the bunker builds. This is particularly the case with Jaha and Octavia, whose stories both end and begin respectively in this one hour alone. First up, we have Jaha, a former leader who always finds himself on hand to give advice on how to unite the people you’re responsible for to whoever needs it, from Abby and Kane in the earlier seasons, to Clarke at the beginning of season four, and now to Octavia. 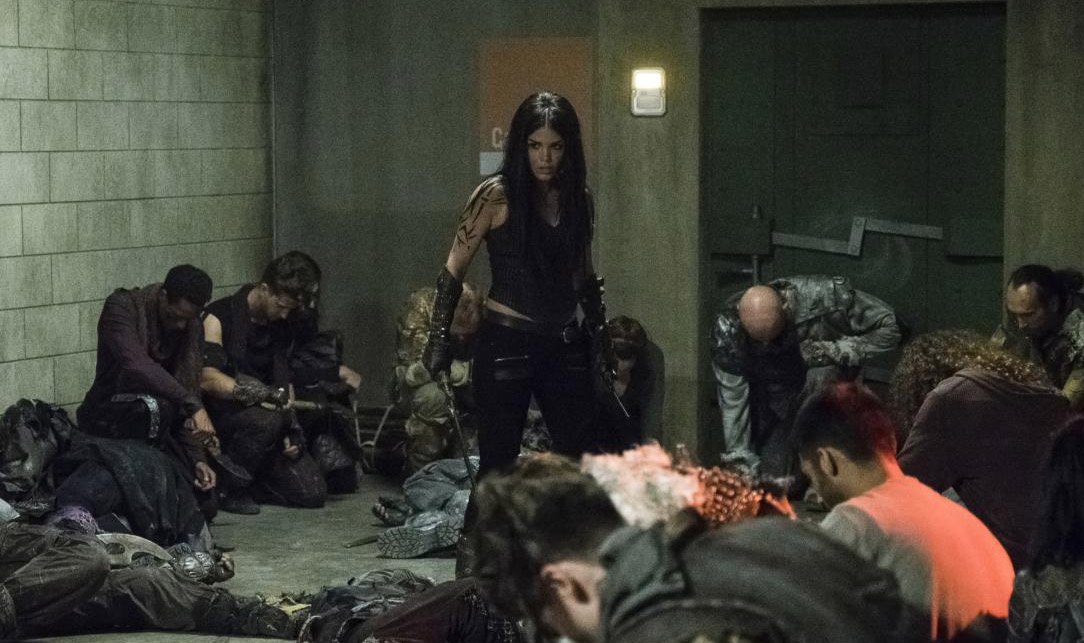 It’s Jaha more than anyone else – more than Indra, and more than Kane, the two people Octavia has usually always listened to in the past – who gives Octavia the push she needed to command in truth. It’s down to her, he says, to make everyone listen to her, to give the warrior in her an enemy to fight against and encourage her people to fight against it too. On the ark, that enemy was death, and anything that pushed the human race closer to it. In the bunker, Octavia makes that enemy brutally clear in a wonderfully visceral sequence of her literally cutting down anyone who dares to contradict it: “You are Wonkru, or you are the enemy of Wonkru. Choose.”

A harsh lesson, yes, but it works and, more impressively, it is uniquely Octavia too, especially in how she decides to dole out justice. Dressed with the blood of the people who went against Wonkru as her armour, Octavia declares that the punishment for anyone who commit crimes against Wonkru is death. But this isn’t the ark, and this isn’t the ground, so there’s no blood must have blood here. Instead, she gives the guilty parties a chance to earn their freedom like the Roman gladiators did, declaring conclave rules: win the fight, save your life. Octavia never wanted to punish crimes with death, so in this decision she’s giving these people a second chance – something that was never given on the ark. It’s fitting, too, that Octavia, who is named by her big brother Bellamy for the sister of the Roman emperor Augustus, uses that history to land on the best way she can think of to lead.

With so much focus on Octavia and her transformation – making the fact that Niylah gives Octavia a copy of Ovid’s Metamorphosesat the start of the episode a very clever indication of what’s to come – it’s no mean feat that the episode also managed to gives all the other big characters in the bunker their moment to shine, but especially so with Jaha. While in the past the series has struggled in knowing what to do with him, ‘Red Queen’ stripped him back to his two stand-out characteristics: he’s a leader, and he’s a dad. Having given Octavia his advice, he passes on his experience and finds one last way to save his people the best he can in getting Octavia’s word that only the guilty will be punished. In looking after Ethan, Jaha is reminded of being a dad to Wells and it’s fitting that in his dying breaths he asks Kane to take him home, to his wife and to his son.

‘Red Queen’, then, took on a lot more in its runtime than ‘Eden’ did last week, making for an intense hour that set up a lot of key moments in the post-praimfaya days and leaving us to unpick what we’re left with after the six-year time jump. There’s Miller, stood at Blodreina’s side with Kara, the skaikru member who staged the coup and earned her freedom in the first arena battle. There’s Gaia, having accepted Octavia as her commander, doing her flamekeeper duty and helping Octavia command, including keeping an eye on the now-grown-up Ethan after Octavia vowed to Jaha that she’d take care of him after his death. And then there’s Kane, making his way into the rotunda as part of the next group of combatants ready to fight for their freedom, with Octavia coolly watching on.

In its first two episodes, The 100 had a lot of catching up to do, and with ‘Red Queen’ the show is now back on equal footing. We’re all caught up now: Clarke and Madi are facing the new threat of Eligius; Bellamy, Raven and everyone in space are looking to Eligius’ main ship as a possible way back to the ground; and Octavia is ruling the bunker through battles and bloodshed. With all the pieces set up, there’s no doubt The 100 is gearing up to dive headfirst into what comes next… and embrace whatever hell is yet to break loose.