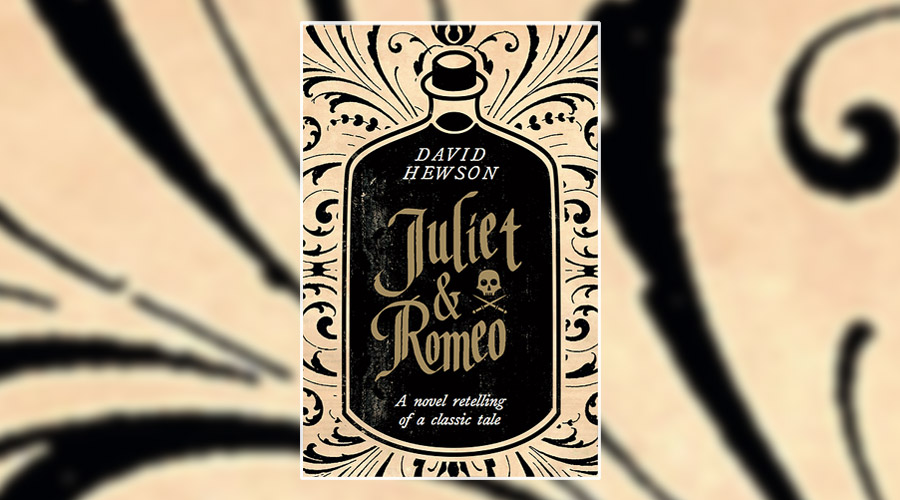 Like the title would suggest, David Hewson’s Juliet & Romeo tells the story of Shakespeare’s classic tragedy, but with a twist. The star-crossed lovers, the warring families, the romance, the tragedy and the murder are all still present – all the hallmarks of a Shakespearean tragedy and the story we know so well. But, in this book, Hewson expands on that story, delving into the sights and sounds of medieval Italy as well as the characters and their motivations with more in-depth detail than can ever hope to be achieved in the two hours traffic of any stage.

The actual story of Romeo and Juliet is iconic enough that no real synopsis needs to be given, and it plays out in mostly the same way here. Romeo of the House of Montague is lovelorn, lovesick and desperate to be loved back before he’s sent away to study, while Juliet of the House of Capulet is a bright young woman facing a forced marriage to a man she doesn’t know at her father’s command. They meet, they marry and then their worlds come crashing down around them as snap judgements, bad decisions and intricate schemes fall apart and become their undoing over the course of a single, fateful week in Verona.

In a lot of ways, Juliet & Romeo felt very thematically similar to the 2013 adaptation of the play by Downton Abbey creator Julian Fellowes. Similarly to the film, Hewson is dedicated to highlighting the period setting of his story, bringing life to the story’s Renaissance roots through detailed descriptions of clothing, politics and artistic advancements so that never before has the Verona of Romeo and Juliet’s story felt like such a character in itself. The language, too, is revised from Shakespeare’s verse and sonnets and turned into ordinary dialogue – a choice which makes sense, given the format, but can also draw the same criticism that the film garnered in that it does distance itself from being recognisably Shakespearean, and not always for the better.

Where this telling of the story sets itself apart, however, is in the character of Juliet. No longer is she the inexperienced, infatuated thirteen-year-old of Shakespeare’s play, and instead Hewson’s Juliet is a force to be reckoned with, taking ownership of her story in a way that completely justifies the order of the main characters’ names in the novel’s title. This Juliet is older, about to celebrate her seventeenth birthday, and intelligent too, meaning she has more agency than most versions of Juliet audiences are usually given.

“Juliet sank her teeth into the fruit: a forceful, decisive bite. Mouth full, she stood on tiptoes to kiss him, forcing the flesh and the juice into Romeo’s mouth with her lips and tongue. Her mind went somewhere it had never been before, and so did his.”

This is a woman who’s determined to break free from the expectations placed upon her by society and by her family. Marriage to Romeo offers her that escape, while marriage to the man her father has picked for her in Count Paris represents everything she’s fighting against: the expectations of her gender and a lifetime of oppression and suffering. The character of Juliet has always been a clever and a practical one, providing a grounded influence to Romeo’s poetic thoughts and flights of fancy, and in Juliet & Romeo this is heightened tenfold, very much infusing Juliet’s 15th century counterpart with all the qualities of a great, modern-day heroine.

For a story as well-known as Romeo and Juliet is, you’d expect something subtitled “a novel retelling” to offer a different perspective and, to an extent, Hewson’s Juliet & Romeo does just that. But while giving Juliet something more to fight for beyond simply ‘true love’ did provide an interesting layer to her character, it didn’t always feel like a natural addition to things, and served to jolt the reader out of the story more often than not.

As a result, Juliet & Romeo feels largely like familiar territory with few risks taken. In writing this novel, Hewson has reworked his own Audible exclusive work Romeo and Juliet: A Novel from something that’s meant to be heard into something that’s meant to be read, and the level of attention to detail included to give Shakespeare’s fictional tale a recognisable context in both geography and history is to be rightfully commended. But the changes didn’t always work, and instead served as a distraction from the story being told, making Juliet & Romeo an enjoyable read, but not an altogether engrossing one.