It hasn’t quite been 2,199 days since we last saw The 100, but at times this near year-long hiatus has definitely felt like it. Thankfully, season five opener ‘Eden’ is finally here to re-introduce us to the characters we know and love – and it’s not playing around either. Just as Praimfaya came to destroy the Earth in the season four finale, the fifth season’s premiere has come to give the series a very welcome reset, complete with new threats, new dynamics, and a wealth of new possibilities to explore.

But first, The 100 had six years in the life of its characters to catch us up on, and for most of ‘Eden’ it was Clarke Griffin who took centre stage. Thanks to the flash forward at the end of last season, we may know where Clarke ends up – facing down the unexpected arrival of a prisoner transport ship – but, as it turns out, getting there proves one hell of a journey. So much, in fact, that the show decided to devote 20 minutes of the episode to Clarke and Clarke alone, shining a light on the new (post-)post-apocalyptic landscape in all of its raw, unforgiving, blisteringly harsh detail.

Clarke’s first days after praimfaya were about survival, pure and simple. Just over a month after being left behind by her friends, Clarke digs herself out of Becca’s lab and heads straight for the bunker, only to find that Polis has been destroyed and its tower has collapsed right onto the door and what Clarke sees as her only chance of salvation. If you wanted a visual representation that The 100 is wiping its slate clean for season five, this is it. And then, just to prove that this is also a show that will never forget its roots, Clarke is given a chance to grieve her friends with a visit to Arkadia, where she finds the ghosts of her past in the form of Jasper’s goggles, Maya’s iPod and a letter for Monty. 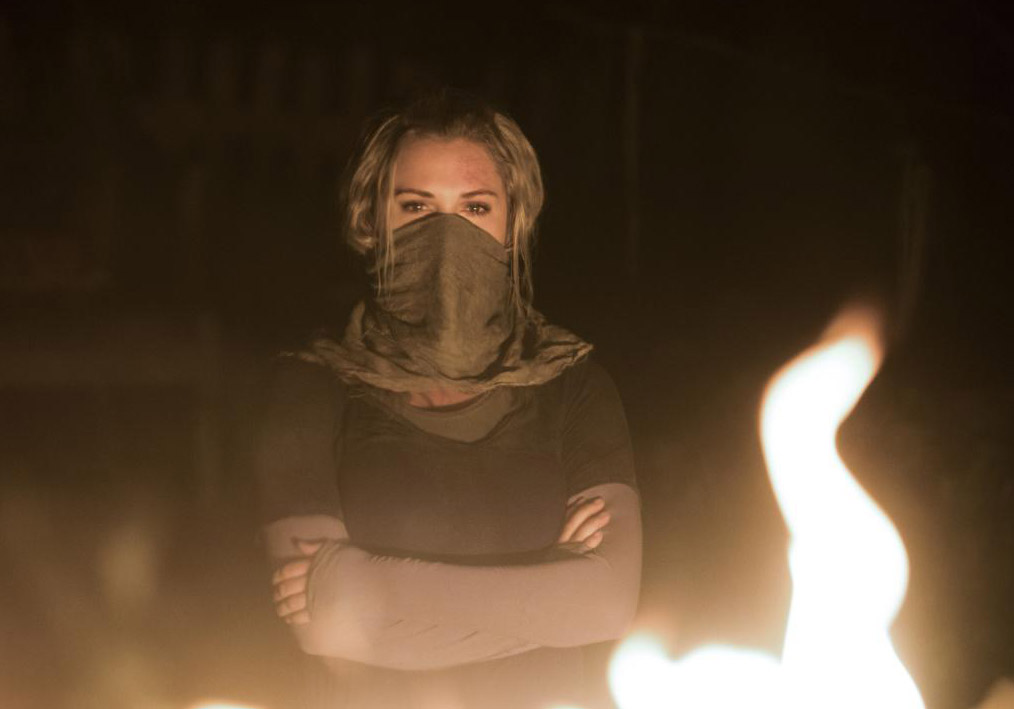 With a six year time jump, it’s clear a season of change is on the horizon, and taking a beat to remember how far we’ve come and everyone we’ve lost along the way is always welcome on a show like The 100, which doesn’t often remember to give you a chance to catch your breath. In ‘Eden’ it does, with four seasons of pain, hurt and life-or-death decisions and two months of grim survival tactics taking Clarke to her breaking point, leaving her feeling lost, hopeless and being closer than she’s ever been to ending everything. If this episode does nothing else, it confirms that actress Eliza Taylor is a tour de force, and Clarke more than earns her 20 minutes of solo screen time just in those five minutes of anguish in a barren wasteland.

But, for all of Clarke’s suffering, her brush with praimfaya and putting a gun to her temple, finding the Shadow Valley is really the moment that Clarke gets that rebirth her character has been chasing all episode. Not only has she found her new lease on life and even a new reason for living when she meets Madi and eventually takes her under her wing, but it’s also here that Clarke acknowledges that one of the defining aspects of her character has been stripped away too: what becomes of the commander of death when there’s no one left to kill? Well, she lives happily and peacefully – for six years at least.

It’s three-quarters of the way through before the episode catches up with anyone who isn’t Clarke, jumping straight into the dynamics of the Spacekru – Bellamy, Raven, Monty, Harper, Murphy, Emori and Echo – after six years together on the Ark. Clearly, the time in space has been mostly good to this bunch, lingering tensions and ‘Green’s green goop’ algae soup aside. Of all of them, Bellamy has his attention mostly focused on getting back to Earth, while Emori is manning the radios and Raven and Echo are kicking ass in a sparring session. It’s only Murphy who’s distanced himself from their group, wrestling with feelings of worthlessness, which have ultimately broken up him and Emori too. 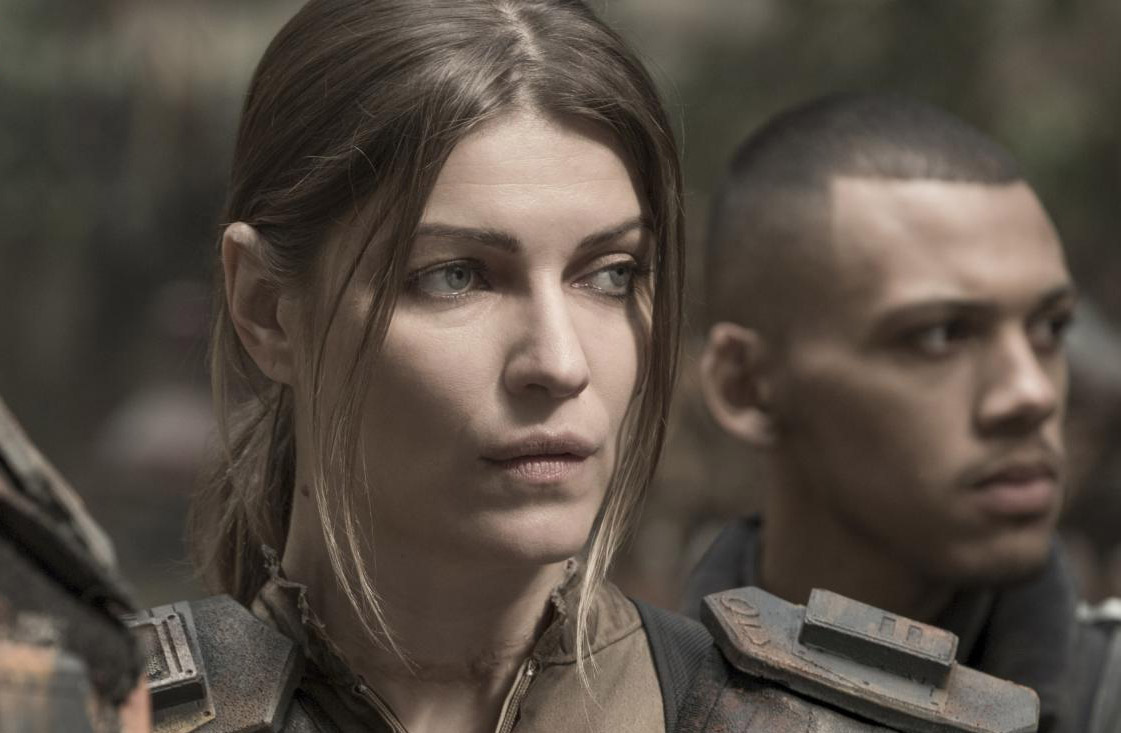 There are lots of interesting threads to unpick here, and it’s made all the more intriguing by the fact we don’t know how the show got here in the first place. Unlike with Clarke and Madi, we haven’t seen these shifts take place, but they still feel like natural developments – and our catch-up with Spacekru also helps us bring the episode full circle: they’re watching from space when they see the transport ship launch and head for Eden, the same ship that Clarke and Madi see arrive on the ground.

While ‘Eden’ didn’t give itself long to set up these season-long plot threads, it still managed to pack a lot in. Clarke’s bond with Madi is well-formed enough that her instinctive, protective reaction to a new threat feels completely earned and, of course, brings back the old “there are no good guys” mantra with a vengeance – once again, it’s kill or be killed, and Clarke isn’t giving these new arrivals the benefit of the doubt. The prisoners themselves are their own mystery, a heavily armed and extremely violent iteration of the original 100, coming to Earth and finding a place to make their home after a century of cryosleep. And then, of course, there’s the brief glimpse we were also given of life in the bunker – a dark, bloody, violent display of a battle, spurred on by a blood-thirsty crowd and overseen by a fierce-looking Octavia in her position as leader.

Pinning the majority of any hour-long episode on one character is a risky move, and doing that in a season premiere makes that move a particularly bold one. Here, it mostly pays off, with Eliza Taylor’s performance proving more than capable of gripping an audience and re-immersing them into the world of The 100 once again, albeit in its new, post-praimfaya state. But the biggest enjoyment from this premiere came from the mysteries presented by the ensemble moments and how they got there – from the development of Bellamy and Echo, to Clarke’s reaction to the arrival of a new enemy, to Monty fearing he’ll become the kind of person who can kill his mother and watch his best friend kill himself once again.

At the start of ‘Eden’, The 100 established its new status quo – this is a show that’s been razed to the ground to be built up once again. By the end of the premiere, there are a lot of unanswered questions but one thing’s for sure: we’re just getting started.