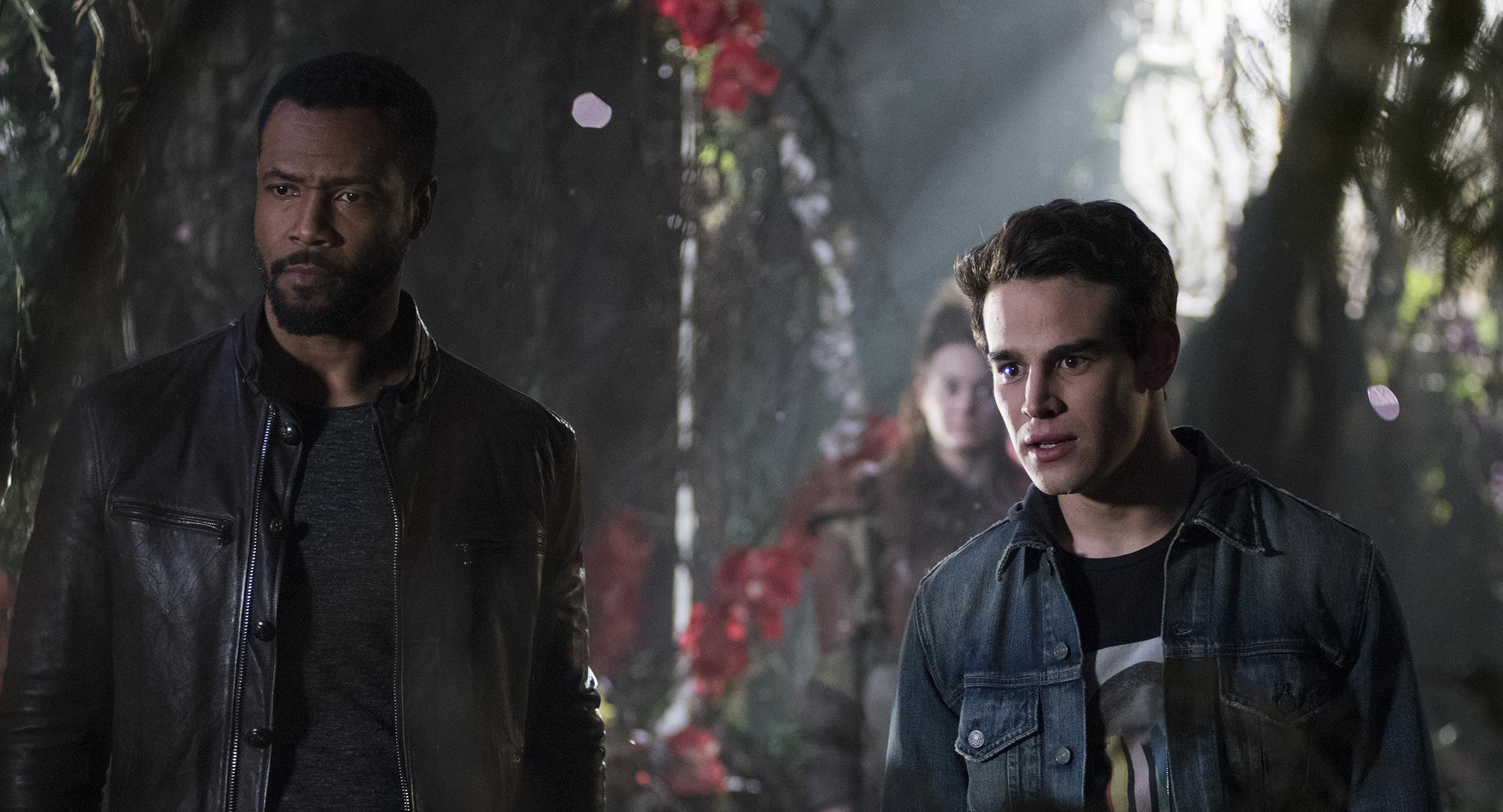 As far as season finales go – and especially ones for fantasy series – Shadowhunters managed to hit most of the right notes in ‘Beside Still Water’. There was a bloody showdown, a violent death and a couple of near-misses, as well as touching character notes and a compelling cliffhanger. Where the episode let itself down was that in a show made up of two major parts, the momentum was slowed and the drama diminished by the half of the story that was looking at season three, rather than focusing on paying due attention to wrapping up the season we’re currently in.

So, getting the bad out of the way first, the Seelie Queen’s quest for chaos to force change is quickly wearing thin and as soon as Luke figured out that Valentine had gotten through the wards with her help, that should have been the last we saw of her at all. Instead, she’s kidnapping Maia in a bid to draw Simon the Daylighter to her and everything that follows is completely formulaic and predictable. Simon speaks to the Queen, and then she lets them go without telling them why, and it’s obvious to everyone but those who’ve known about the Downworld the longest that Simon has made the Queen a promise to ensure they can go home.

It’s fairly obvious that without this plot the Downworld half of the main cast would have had very little to do in this episode, but Shadowhunters has skipped on characters in the past, and it would have benefitted from being more selective here as well. Or, if we had to go to the Seelie Court, at the very least the show could have cut out the clips of Luke’s search for Maia, and his fight with Meliorn. Of everything, these were the most superfluous, and the most ill-timed cutaways of the entire hour.

The frustration here though stems primarily from the fact that what was going on elsewhere in ‘Beside Still Water’ was largely worth having all of the attention, beginning with Jonathan’s final moments of survival in the opening scene and following the scenes of carnage that his final actions let loose on the city of New York. In summoning his mother Lilith, otherwise known as the demon whose blood Valentine used to create him, Jonathan opened a rift between the demon world of Edom and the mundane world, unleashing a swarm of demons in the city that Alec and Izzy have to stay behind and slay. Clary and Jace, meanwhile, are left to travel to Idris and try to stop Valentine and his circle before he gets the chance to destroy the Downworld for good.

While Alec’s arc allowed him to work with Magnus once again, working together as leaders of their respective communities and falling back into the old habits of fighting for and protecting one another while they work, there is no denying that this episode belonged to Jace and Clary. From Jace’s anger at Malachi’s betrayal through to his despair at the thought of Clary being killed in front of him, Dominic Sherwood delivered a brutal and merciless Jace here, but it’s when Jace is taken out of the equation after Valentine kills him that Kat McNamara gets her chance to shine – and, honestly, it’s the scene that she has been waiting for to finally show off what she can do. Clary’s complete and utter devastation at Jace’s death is keenly felt, and McNamara’s distraught performance is only heightened by the truly heartbreaking flashbacks through Alec and Jace’s history as Alec can feel his parabatai die as the rune burns away.

And then, of course, there’s Clary’s vicious final fight against Valentine after he succeeds in raising Raziel and asks for the “demon scum” of the world to be eradicated. The angel decrees that the one who spills blood will get one action from him, and Clary puts up one hell of a fight for it to be her, ultimately killing Valentine and asking for Jace to be brought back to life. It may have taken two whole seasons, but it feels like the show is finally comfortable with Clary and her story – and after this finale, it’s clear that her strengths definitely lie away from love triangle drama, and more on the gut-wrenchingly emotional side of things. It also sets up a fascinating premise for what comes next; Jace was never going to die and stay dead, but he’s already foreshadowing dark consequences to Clary’s decision. It’s twists like that which make having read the books a good thing with this series – we know where it’s going, and we can’t wait to get there.

Of course, in true Shadowhunters poor-pacing fashion, the episode dedicated a lot of time to the after in the form of a celebration party at Hunter’s Moon. Between checking in with the main characters, furthering the bond between Clary and Izzy and deepening the realisation that Jace isn’t actually ok after what happened at the lake, the excess time was spent revealing that Simon did make that deal with the Seelie Queen and that Luke’s mundane cop partner has figured out he’s a werewolf – all things that will no doubt come back in season three, but felt at odds with everything that has come before. The one good thing to come out of this final addendum came in Alec and Magnus communicating again, with Alec apologising and the pair deciding that they’re willing to both work on their relationship to stay together. And obviously there was also the closing cliffhanger and the solving of the mystery of the disappearing demons: Jonathan’s mother has come for him, and we have our new Big Bad.

‘Beside Still Water’ had the potential to be so much better than it was, but what we got wasn’t particularly awful either – and the highlights more than made up for the episode’s weaker elements. When it came to another trip to the Seelie Court, the episode simply fell flat, but the shadowhunters’ final push to stop Valentine delivered a dark and engaging plot line with very few missteps. Through the sheer effort and commitment of most of its cast, Shadowhunters has managed to end its tumultuous second season as strongly as it could, ready to do it all over again in season three in just a few months.