It may have taken Shadowhunters a bit of time to get going in this week’s episode, but ‘Hail and Farewell’ had a finale worth sticking around for – even though it does mean that we’re heading into next week’s season finale without this season’s best player. Despite a middling start as the Nephilim tried to unite the Downworlders and the Clave to fight their war against Valentine, the episode’s last third to bring the episode back around, packing it with tense fight scenes, dramatic twists and a vicious conclusion (that probably came a bit too quickly).

After last week’s Jonathan-is-Sebastian revelation, the hunt was on this week to find Jonathan and Valentine before they figure out the Mortal Mirror isn’t what they think it is. With the Downworlders refusing to team up with the Clave now they’ve joined forces with the Seelie Court, each side is working to find the pair in their own way, which ultimately leads to Jonathan and Valentine being trapped in the city by warlock-powered portal wards and Jace, Clary, Izzy and Alec tracking Jonathan to end the threat once and for all. Which means, of course, that the showdown, when it does happen, is one big epic battle scene. 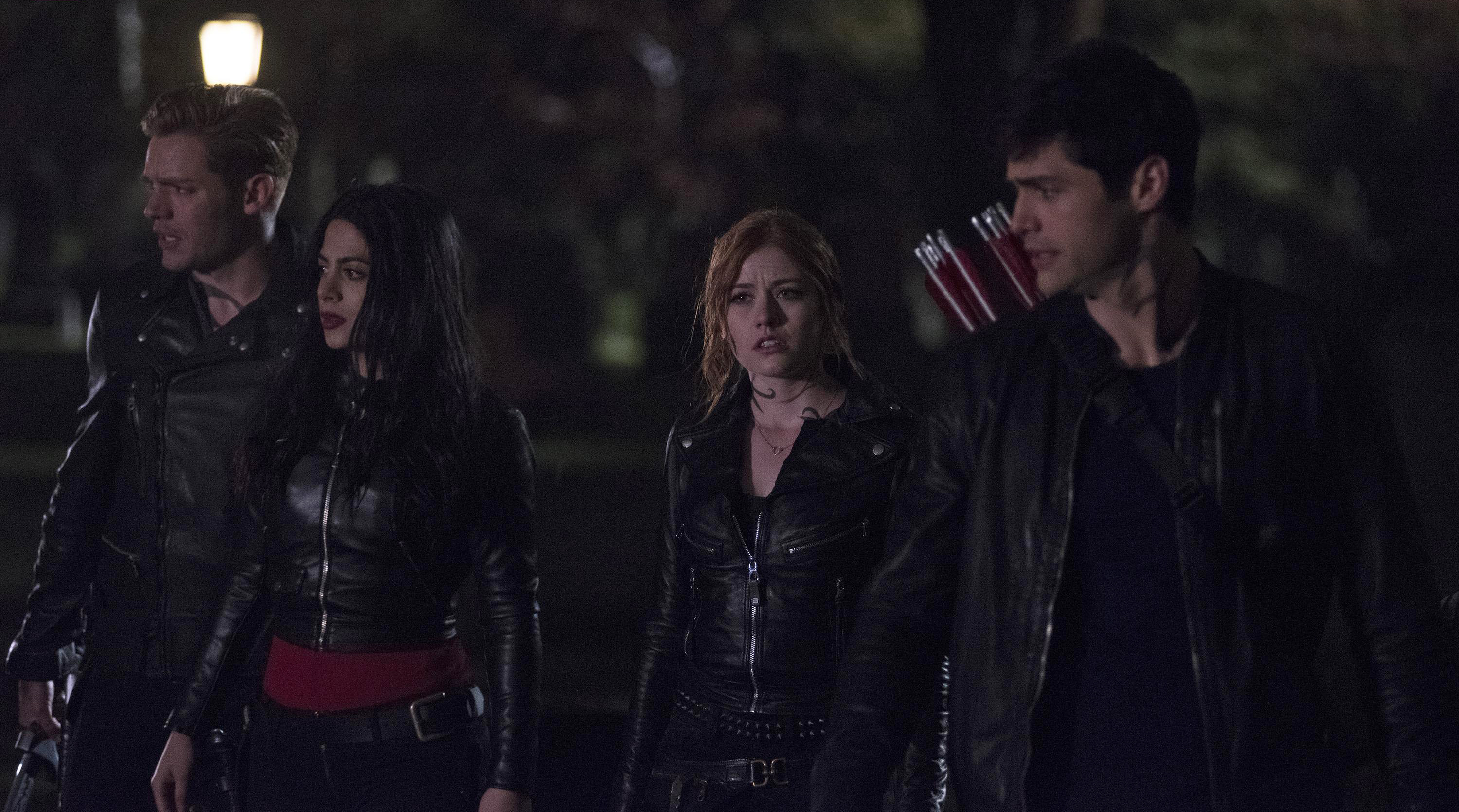 How we get there, however, is a bit of a muddle. The first half of the episode weighted heavily towards the political machinations of the characters, with the Valentine threat dividing loyalties on either side of the equation as the Downworlders and the Nephilim worlds are turned against each other. It leaves pairings like Clary and Luke in a difficult place, with Magnus and Alec still at odds with each other anyway and the long-forgotten pairing of Izzy and Raphael the only pair to be offered any sense of closure. Still, it’s not all us and them, which is nice to see, with Simon helping Clary by talking to the Seelie Queen (now played by Sarah Hyland) and Luke tipping off the Institute about the portal wards now up in New York, proving that some lines of connection are still open even though the Queen is hoping to divide the worlds to the point of starting a war and forcing a change.

But still, even that was better than Clary’s angel vision, and the subsequent angelic connection tracking rune magic thing that took place between her and Jace. In a word, that entire scene was just bad – loud music, cheesy special effects and just an all around awkward minute or so of Clary cuddling against Jace’s bare chest. Romantic it wasn’t, but at least their angel bond seemed to work its tracking magic, making the whole thing an apparently necessary segue into bringing us to the episode’s dark conclusion, which is where ‘Hail and Farewell’ really came into its own.

And, while Jonathan alone is a force to be reckoned with, it turns out that Jonathan and Valentine together are pure evil, turning a funeral of mundanes into an army of forsaken – human beings driven insane after being marked with angelic runes – to weigh the odds of battle in Jonathan’s favour as he vows to kill every single shadowhunter. In turn, Izzy and Clary’s fight against the forsaken came across very well, the pair of them fighting beautifully in some epic scenes. Jace and Alec’s own section of battle was a lot more of mess, but that was largely because it served as a set up for Jonathan to grab Jace and drag him away to be presented as a trophy to their father. Before all this kicked off, removing Valentine from the scene felt more than a bit contrived, but it did do a wonderful job of playing into Jonathan’s family and abandonment issues – which Jace later played on further in the ‘Hail and Farewell’ showpiece. 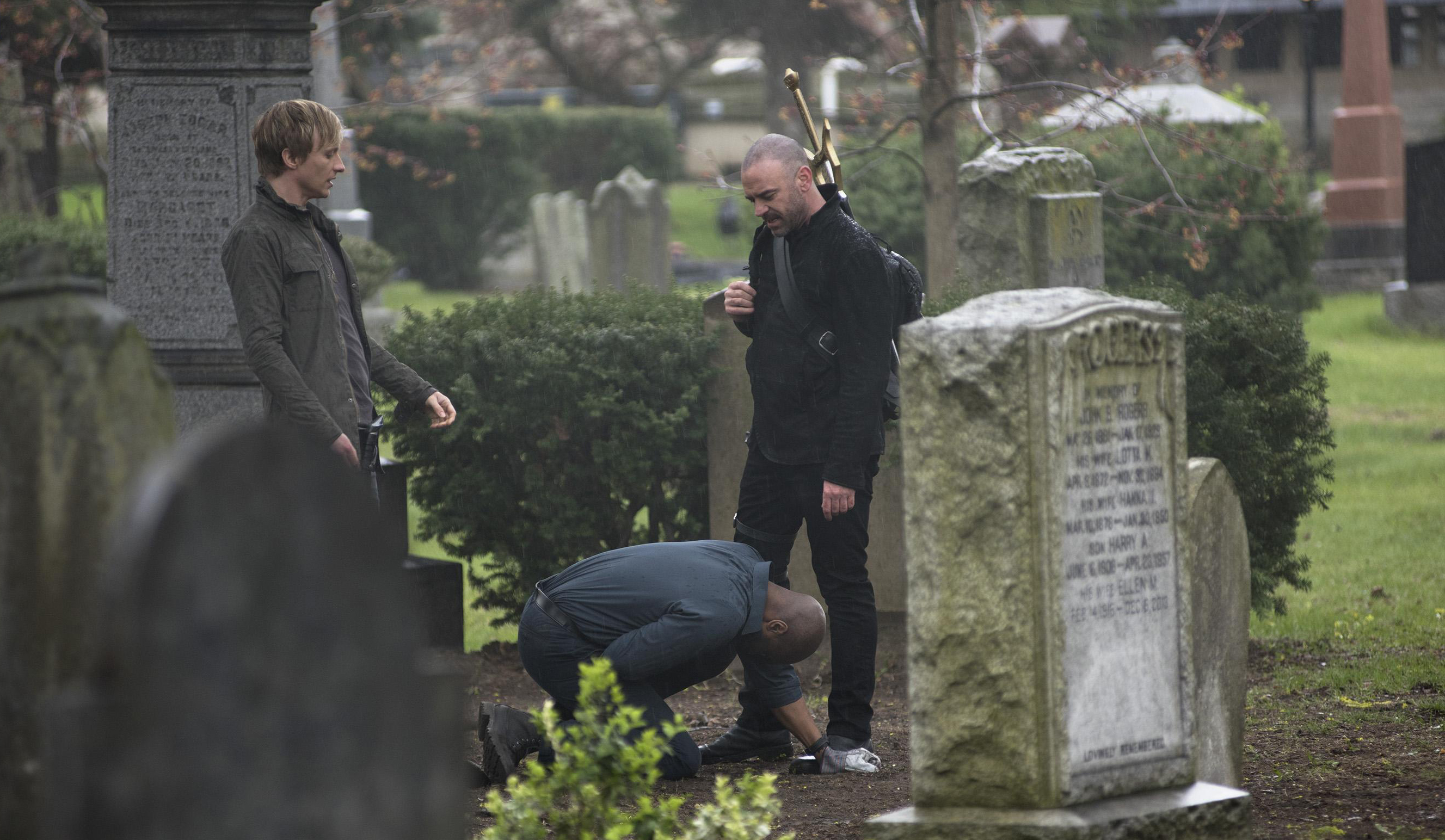 For all the focus Jonathan has placed on preserving his relationship with Clary, it’s easy to forget that there’s the rivalry with Jace to deal with too, which inevitably culminated here in their fight to find out who the best JC is. And, poor fighting dialogue aside, said showdown was truly one of the best moments of the series so far. It was tense, it was brutal and it was bloody – and it almost resulted in Jace’s death. Instead, it was Jonathan who was killed after Izzy’s intervention had her inflicting revenge for his attack on Max and with one final comeback stab from an injured Jace, we said goodbye to the show’s best character to date. But what a way to go.

By the end of the episode, ‘Hail and Farewell’ had just about redeemed itself; the only problem is, by eliminating the threat of Jonathan so soon, it’s hard to muster up excitement for next week’s season finale. Yes, Clary and Jace gave into their feelings and kissed after being afraid of losing the other. Yes, Maia has been taken by the Seelie Court, most probably to manipulate Simon. And yes, Valentine and the Seelie Queen are on the verge of making a deal as he prepares to raise the angel Raziel in Idris. But there’s no real threat there, no antagonising force – just a race against time until Clary and/or Jace inevitably manage to save the day.

As a slow-going episode with a brutal climax, ‘Hail and Farewell’ ended on a high, but as the penultimate episode of the series, the show has left itself a lot to do to top it in next week’s finale.