‘By the Light of the Dawn’

As far as well-crafted mid-season finales go, ‘By the Light of the Dawn’ was a bit of a mess. It took too long to get going and stopped to re-introduce old characters and old, somewhat irrelevant plot lines a bit too often in an effort to bring together all the loose threads of the first half of series. But as haphazardly constructed as it was, the Shadowhunters winter finale covered a lot of ground, and when we were purely dealing with the main threat – i.e. Valentine and his plans for the Soul Sword – the ground being covered served us with impressive action sequences, some wonderful revelations and plenty of great set-ups to explore further in the back half of the season.

Picking up where we left off last week then, it seems it was almost embarrassingly easy for Valentine to storm the Institute and take it over, picking off a considerable number of Shadowhunters as he did so – although Madzie’s decision to spare Alec from the suffocation was a lovely nod back to the relationship built at their first meeting back in episode five. Even so, this means that we’re not even five minutes in and we have Alec left to fend for the Institute by himself (and later, with Aldertree) and Valentine dangling Simon’s life over Clary in an attempt to entice her to him so he can activate the Soul Sword and rid the world of Downworlders forever.

So far so solid, but that in itself is the problem: all this is doing is letting us know we’re going to end up in the Institute fighting Valentine, so everything that happens in the 20 minutes before we actually get there just falls a little flat. Before we get to that point, it’s just a rush through all the new information and revelations that needed to be heard and there’s no real sense of urgency when a new potential problem is both presented and solved within a minute of each other. Dot’s revelation that Jace can destroy the Soul Sword is a clear example of this – we go from the revelation, to the how of it in Magnus’ ‘translation’ of the angel vision, to the why when Jace reaffirms his demon blood once again and the consequences of the destruction within about two minutes. At least some of that could have been introduced beforehand in the previous episode or otherwise the other half could have been teased later, but as it was, a massive info-dump at the beginning of an episode, is just poor storytelling. 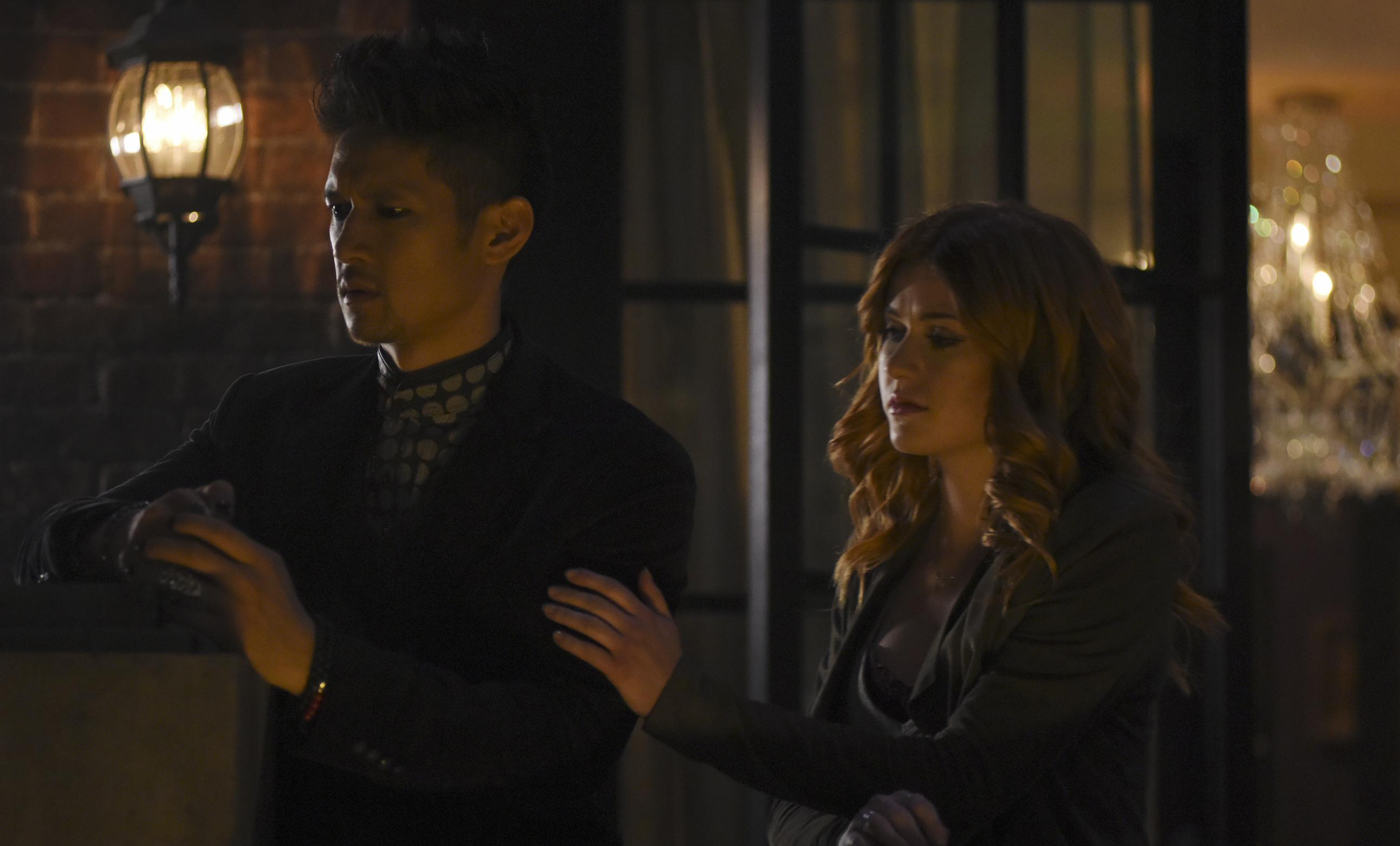 Unfortunately a lot of the episode continues on in that way. We spend five minutes with Isabelle and Raphael lingering on the events of last week, while Jace and Luke decide to drive to the Institute from Magnus’ to give them time to reflect on parabatai and allow Maia to catch up with them and, again, revisit what happened last week. All this really does is provide the basis to get everyone together in the same place – and even so Clary is still there at the same time anyway despite being left behind (again) because she had the good sense to portal over and act quickly, which is handy seeing as they’re at war.

Through all of this, it’s mainly Valentine and Simon who are driving the suspense and absolutely everything surrounding this narrative was spot on. Valentine’s video messages, Simon’s terror, Simon’s throat being slit and Simon bleeding out until he turns to dust are all the kind of high stake developments you want in a climax, and the fact that Clary giving herself to Valentine to save Simon actually turned out to be Jace under a glamour was a very well-done twist that turned the tide of the episode nicely.

From there on out, ‘By the Light of the Dawn’ became a very worthy episode, with some great action sequences, some quietly comedic moments from Simon and some truly gratifying pay-offs. Yes, it was still prone to the odd cliché (Clary being easily captured, despite having taken down two other baddies in spectacular style seconds before), but largely it all played out with great showmanship, from Simon’s heroism to Jace’s backfiring act of self-sacrifice. 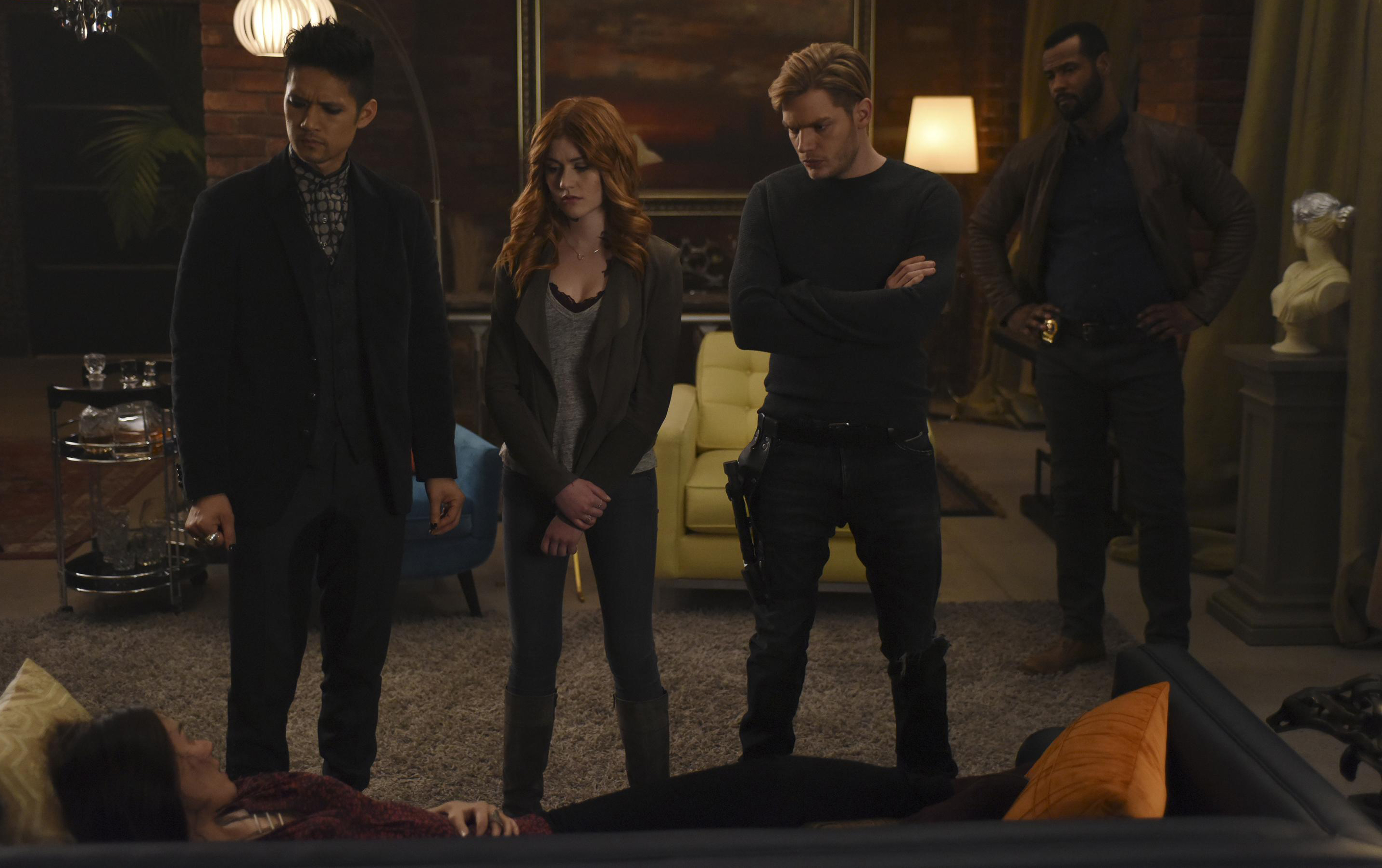 And that would be my other major gripe of the episode – after ten hours of Jace’s demon blood being to blame for his self-destructive behaviour, and his being Clary’s brother being a major cause of his own self-hatred, the reveal that he actually has angel blood and isn’t Clary’s brother after all came too quickly and as an after-thought amid a larger scale sequence, making for a bit of a deflating ‘oh, is that it?’ kind of moment. Despite that though, for me Dominic Sherwood did great work throughout and his pseudo-redemption by the end of the episode was well-earned by both the actor and Jace after such an intense rollercoaster of a season.

So, with Valentine captured for the Clave’s reckoning, vampire Simon now able to walk (and be with Clary) in the sunlight and Jace wrestling with his newfound knowledge that he isn’t actually a monster for loving the girl he loves, ‘By the Light of the Dawn’ has closed and introduced a number of great storylines ready to explore in more detail in new episodes but the question of whether or not to see it through is another matter. For book fans, the fact that the back half of the season will introduce Sebastian should be enough of a draw to tune back in, but TV viewers alone will need a lot of persuading to come back when the episodes are always going to be hit and miss.

Shadowhunters hasn’t seemed to have learned from its mistakes – and it’s looking like it never will either. It will always have a bit of a balancing problem, which is only more noticeable when you watch it alongside some of the other, better crafted shows out there right now. But there’s also no denying that it has a wealth of source material that it can and does make good use of and, largely, a really good cast on hand to pull it all together.