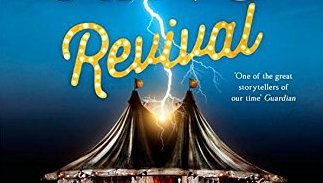 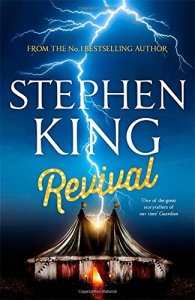 Stephen King’s latest novel, Revival, is everything you would expect from the bestselling American author. It’s dark and disturbing, conjuring up a nightmarish quality as it delves into life, death, and the things that may or may not reside on the other side of existence.

The story is told from the eyes of Jamie Morton, as he recalls the events of his life from the innocence of childhood to his twilight years where there’s simply no going back from the horrors that he’s witnessed. In 1962 a shadow falls over six year old Jamie. That shadow belongs to a man called Charles Jacobs, a charming minister with a seemingly harmless fascination with electricity.

Right at the beginning of the book, Jacobs is established as the fifth business or change agent in Jamie’s life, “the joker who pops out of the deck at odd intervals over the years”. After a horrifying accident sends Jacobs on a downward spiral, making him turn his back on religion in favour of alternative beliefs, Jamie loses track of his friend and the man who he once looked up to.

Faced with addiction, familial grief and financial setbacks, Jamie takes us through his struggles as a nomadic musician, until he eventually reaches an inevitable dead end that forces him to decide between the life he’s been leading or a new path.

As Jamie’s story progresses, so too does Jacobs’, who changes from minister to man, and man to monster, all the while popping up at different interludes in Jamie’s life, at first bettering it and eventually tearing it apart. Jamie realises he can’t escape Jacobs’ madness and must continue down the road paved for him in order to repay his debt, no matter how immoral or terrible the cost.

Revival may be a work of sheer fantasy but it never feels outside the realms of possibility, even during its strangest, most terrifying moments (two words – giant ants). It’s not so much a story about religion, but one of faith and how easily it’s lost as life throws obstacles and awful misfortunes at people.

The tone and quality of the writing is predictably brilliant, but what’s not foreseeable is where the novel is going to take you, making for a tense and page turning read. Though the conclusion is hinted at as Jacobs travels a darker and darker path, you can never fully prepare yourself for the vividness of King’s descriptions, which will haunt your dreams and make you look at lightning in a different way.

I’m not the first person to label Stephen King as one of the best writers of our time, and I won’t be the last, but it’s novels like Revival that make all the praise lauded on him completely warranted. You have to be an accomplished storyteller to create something so unsettling, so melancholy and so disturbingly believable. This is Stephen King at his best.