Frank Turner gigs aren’t just rock ’n’ roll shows (although they’re definitely that). They’re communities. After a few songs, Turner asks first-timers in the crowd to raise their hand and it’s a decided minority. The newbies are welcomed with a round of applause, and the evening just gets more convivial from there.

This is Turner’s 2,162nd show. Over 20 years of touring, that averages out to just over 100 shows a year, or at least two shows a week since 1998. With a work ethic like that you’d forgive the man for seeming jaded, but there isn’t the slightest hint of tiredness in tonight’s set. He’s a ball of manic, pogoing energy, sweaty from the off, a big grin pasted across his face. The on-stage camaraderie is obvious – song intros often wander off into anecdotes and in-jokes – and so, more importantly, is his rapport with the audience. 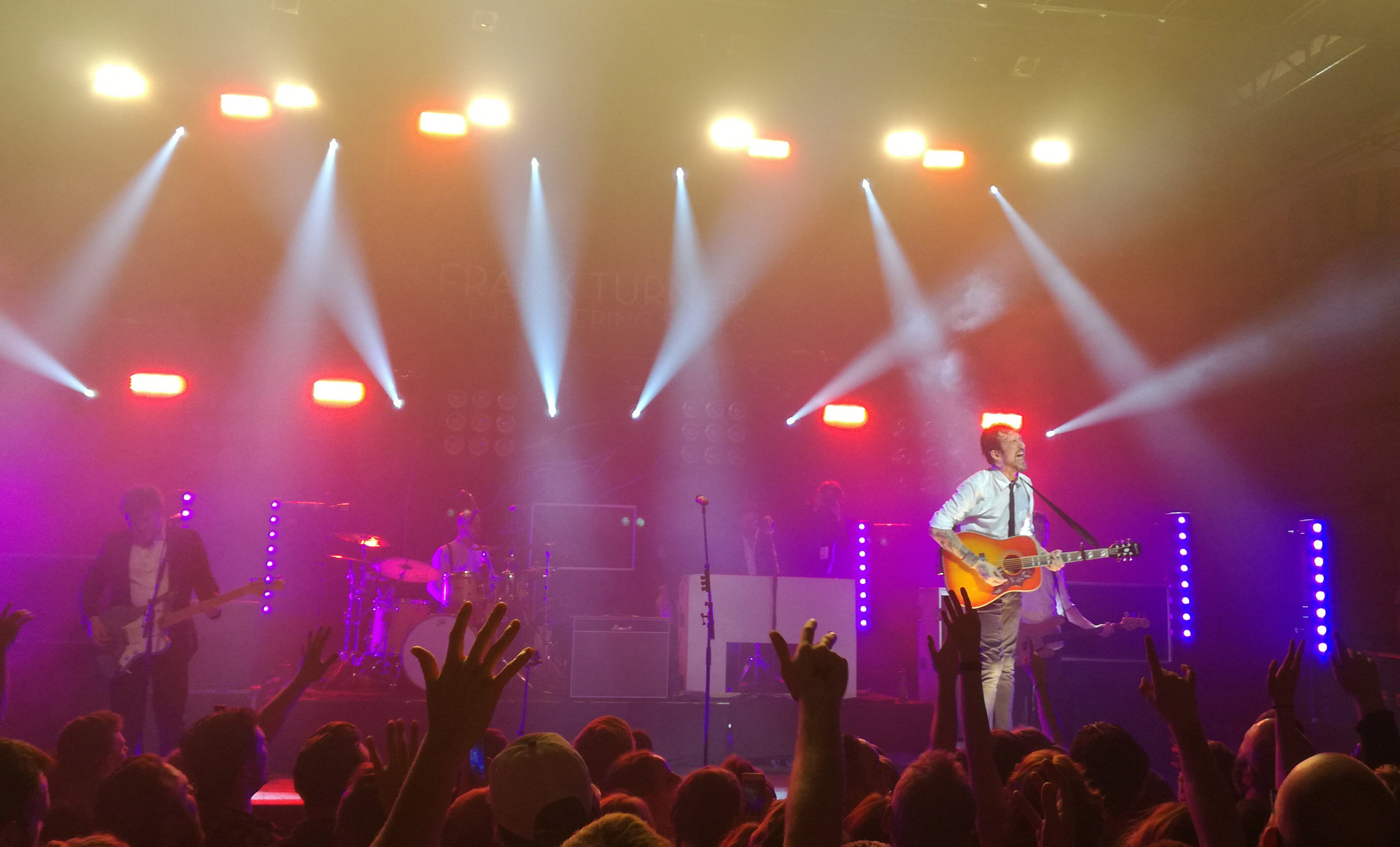 Frank Turner crowds believe in a way that few rock audiences do these days. Tonight’s set list is varied, spanning old favourites like ‘Love, Ire & Song’ and ‘Reasons Not To Be An Idiot’, self-confessed ‘mid-period’ numbers from England Keep My Bones and singles from new album Be More Kind. One audience member is graced with an obscure request, ‘Pass It Along’, because this is her fiftieth(!) Turner gig. But no matter when the song was written and no matter how deep a cut it may be, the audience shout back every single word.

That’s no mean feat: Turner’s lyrics are the pop equivalent of a Hamlet soliloquy. But maybe that’s why every number tonight is greeted like a hit single – people find meaning in his impassioned anthems. His songs get deep into people’s lives, and so tonight’s show isn’t just entertainment – it’s a quasi-religious experience.

That’s kind of ironic, given the enthusiasm with which Turner lambasts priests and religion at large in ‘Glory Hallelujah’ – he certainly exhibits the traits of an old-fashioned revivalist preacher tonight, calling us to take the values enshrined at his shows (don’t be an arsehole, essentially) out into the world with us when we leave. He has his opinions about hippies, too, but there’s more than a shade of 1967 here tonight – as Turner says, these shows are the part of life that he has control over, and he fashions them to teach the crowd about love. We don’t get a wall of hugs tonight, but the atmosphere is still as communal as a sweaty rock gig can be. 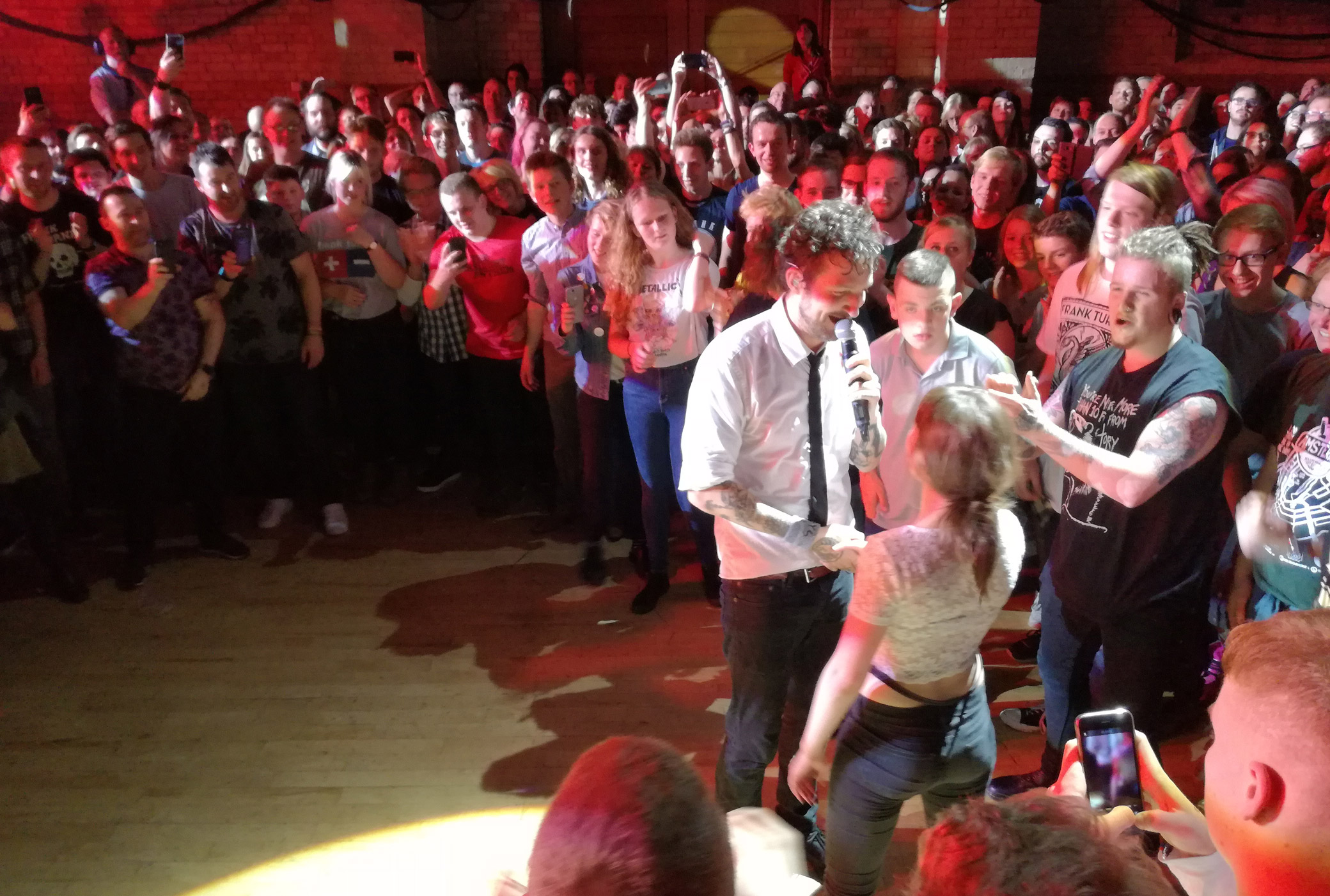 But enough philosophy – what of the music? Well, if you like punk and you like folk and you like jumping up and down and you like circle pits, then boy does Frank Turner have a show for you. It’s rowdy, it’s righteously angry, it’s shouty and stompy and celtic and country. The band are flawless, as you’d expect on that touring schedule, and when they get moments to shine, they’re utterly delightful. A particular highlight lands in the form of new single ‘Blackout’, which sounds like the love child of Billy Bragg and Daft Punk. It’s a sudden change of pace, and it’s gorgeous, all Fender twang and syncopated bass groove.

The show climaxes with the runaway train ‘Four Simple Words’ (of course), and after whipping up a proper pit in the slightly ageing Cambridge crowd, Turner launches himself off the barriers into an eagerly waiting sea of hands to be carried in triumph around the hall. That done, he clears space on the floor and proceeds to ballroom dance with a young fan. It’s audience participation turned up to 11, and it’s fabulous. There is no fourth wall – he belongs to us, and we to him.

As his banners say, Frank Turner is ‘always on tour’. There are far worse things you could do with one of your evenings than go and join his travelling positivity commune. An absolute blast, and a masterclass in showmanship.