Legion is the television equivalent of Inception, even more so in this second episode. As we wander into David’s memories, the seamless connections between memory and present day, along with cuts that fit into other memory explorations, create an intrinsically layered story. It’s tangible enough to not get lost, but it’s apparent that with more answers will come even more questions.

The second episode of Legion is a slightly shorter 45 mins and does well to pace the story by sticking to one (ish) location. Dan Stevens continues to be brilliant as David Haller (aka Legion), really tapping into the skittish, confused person David has become, making each iteration we see different but related to the whole.

In order to really get a good overview of this episode it’s easiest to focus on three main parts, which intersect and are spliced, and form the basis of the episode: Memory Work, The Father Memory and In The MRI machine.

Picking up where we left off, David, Syd (Rachel Keller), Dr Melanie Bird (Jean Smart), Ptonomy (Jermaine Harris) and the other mutants are sailing along a river, escaping to Summerland. David’s memories are fragmented, snapping together the journey to the Summerland facility deep in the forest. Division 3, his captors, are in hot pursuit, led by the silent man who we learn is named The Eye.

As the drugs wear off and David’s powers begin to ply his mind, the voices become louder and stronger. Dr Bird tells him that he has telepathy, possibly telekinesis (big yes on that one), and uses her own telepathic powers to help him. She calls to his mind with hers, getting him to focus on her voice, something of a trope with telepaths – namely Jean Grey, who is helped with her telepathic powers by David’s biological father, another powerful telepath, Professor Charles Xavier. When helping him to dial down the voices, Bird asks him to imagine a giant volume control that he turns down. Using this imagery speaks to the X-Men: Legacy comics run with Legion where his mind is full of very literal imagery for metaphors.

With this initial step done, Dr Bird, David and Ptonomy enter a glass walled, stilted room, with a round table. The three sit and Dr Bird tells him they are going to do Memory Work to help piece him back to together. Smart gets to do lots in this episode, acting as guide and concerned councillor. Her presence exudes authority but not in a controlling way, she has a lighter touch. She embodies a leader, but not a typical boss. 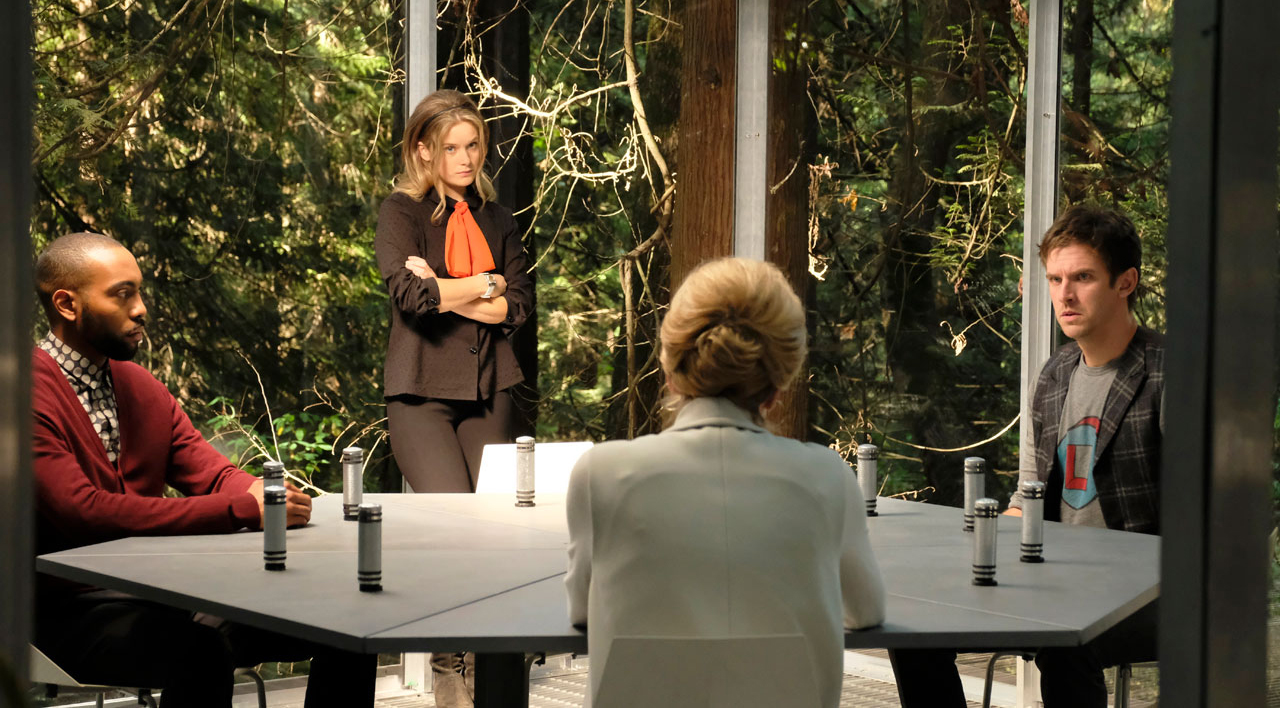 In their first outing into memory, the three find themselves in David’s childhood, exploring his symbiotic relationship with his sister, Amy, and his love for his mother. As a memory artist, Ptonomy’s power allows him to enter David’s memories; he has some control over where they go, but he is limited, meaning David has to be the guide. David asks him if he can interact with the memory, to which Ptonomy replies that he can, but that it will change the memory. I have a feeling this is going to be key later on.

They then travel to a memory of David with his therapist, Dr Poole. This scene is set some time after the incident in his apartment, and the two discuss his relationship with a woman called Philly. David is twitchy but open; he’s trying to be honest with Dr Poole, even admitting that he sometimes says things just because he’s repeating what the voices are saying to him. This is a note that comes back near the end of the episode.

During the scenes with David and Dr Poole, Ptonomy notices a couple of things. Firstly, that some of the memory is missing; though David insists he’s not consciously hiding any information. Secondly, that David is very strong, resisting Ptonomy’s ability to travel through memories.

Linked with the therapist memory, sandwiched between David’s childhood and the present day, we have a memory of David’s father. Due to being in David’s mind, we see him as much more vulnerable. He is often afraid, looking to retreat, waiting to be overwhelmed. But, he is far less physically jittery.

David struggles in the memory with his father, who appears to be reading him The Angriest Boy In The World story, with its creepy pictures of a murderous looking boy with a knife. His face is also unseen, hidden from David which suggests a sinister force is at work.

This scene, along with other moments in David’s memories wherein the room quakes, illustrates the hostility of David’s mind. What is made very clear is how little Dr Bird and her team know about David and his history. Or perhaps given some knowledge of the Legion character, it seems obvious that his mind is not a place that only he occupies. A thread that is going to run through this series, it seems, is that we won’t even know quite how “crazy” David is, what is real and what is his interpretation of reality, along with what effect that is having on the story as we understand it. 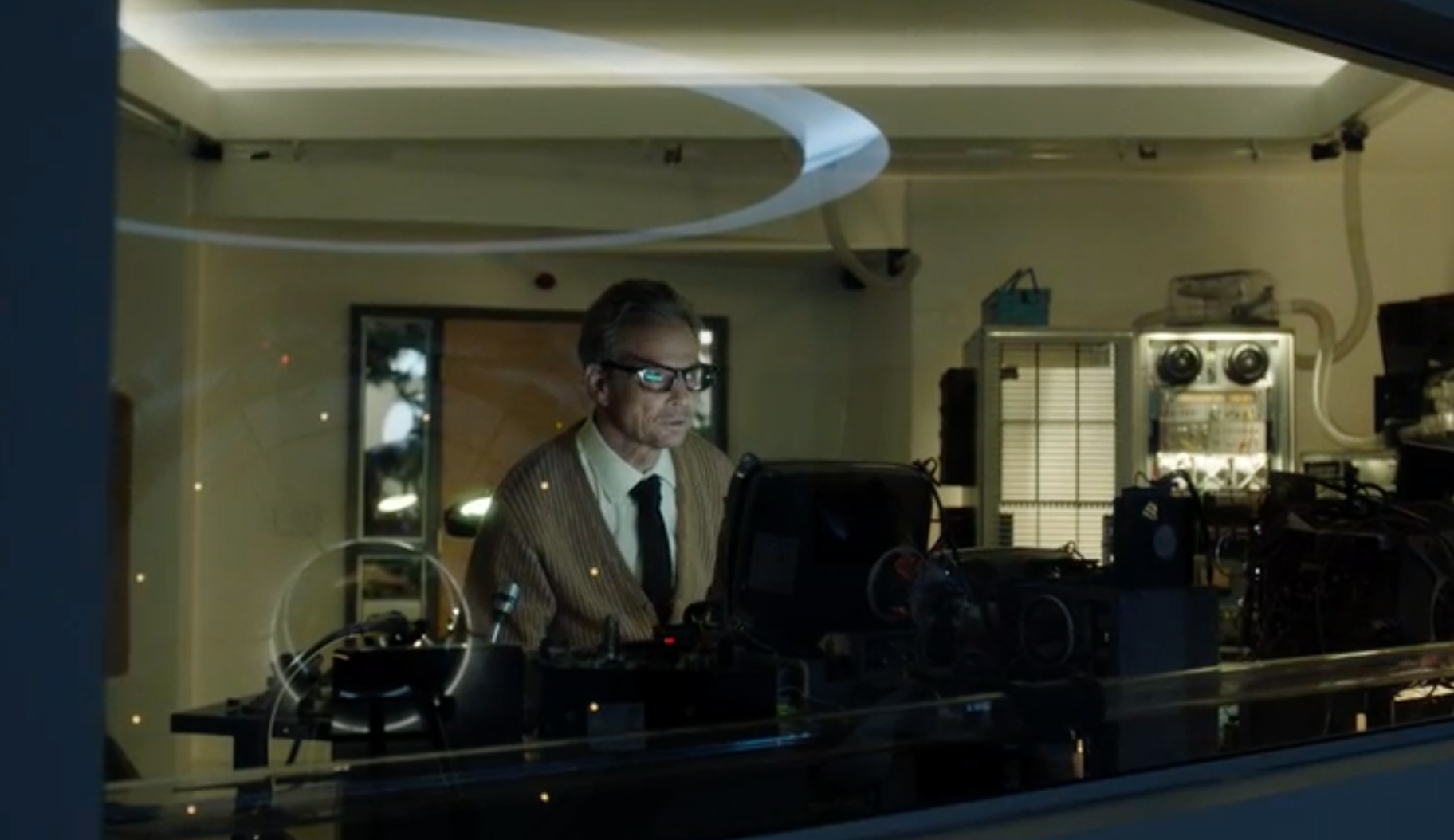 In the MRI machine

The third part that this episode focuses on, and pivots around, is David within an MRI machine at the Summerland facility. Here, Cary, a technician at the facility, is monitoring David in the machine, looking for where his memories are kept by asking him about certain types of memory and watching for brain responses.

This culminates in David accidentally tapping into his power and locating his sister. Amy is looking for him at the facility that he has just escaped from but they have no record of him.

The yellow eyed man also makes a horrifying appearance in this part of the episode, continuing to increase the horror factor of Legion, along with the touches of light comedy and genuine mystery.

Overall, this was another great episode, perfectly continuing the tone set up in the premiere. Chapter 2 also elaborates nicely on the fragments of David’s memories that we saw in episode one, and Lenny (Aubrey Plaza) plays an interesting role in one of David’s memories. It’s now known, at least from the current narrative’s perspective, that David knew Lenny before entering the mental hospital, Clockworks. What happened between then and her death is still unclear, and I can’t wait to find out.