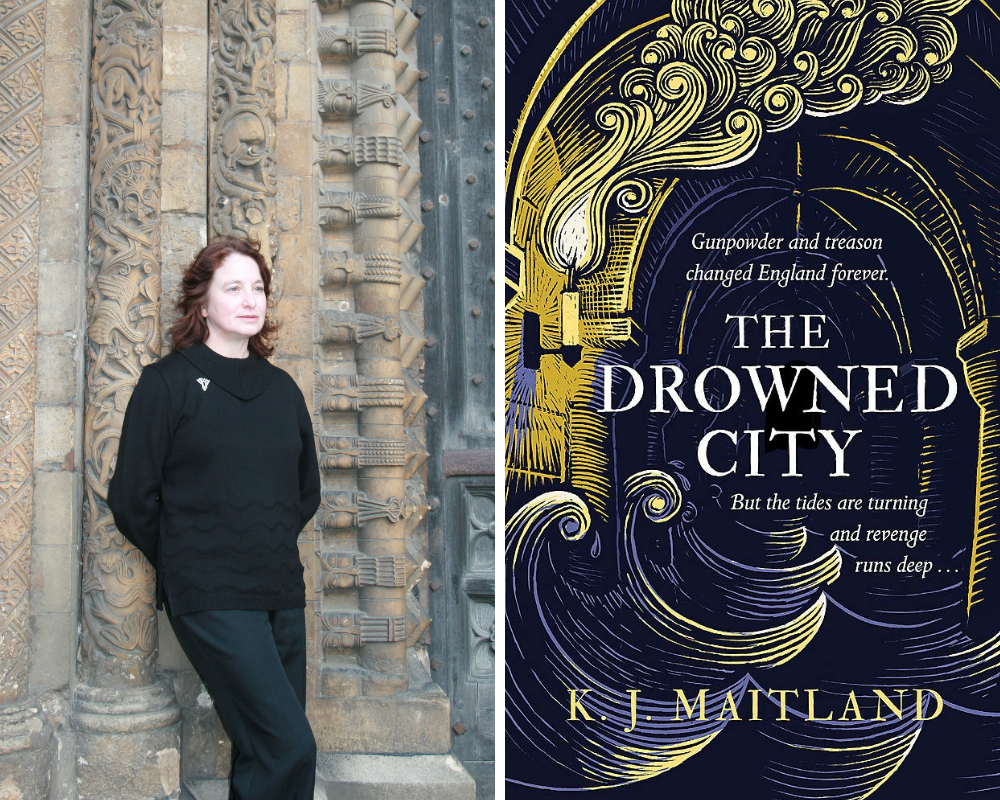 When I moved to a little cottage in Devon a few years ago, I adopted the blacksmith’s forge in the garden as my writing office. Being even a few yards away from the house, means when I go to work each day, I walk out of my life and into the world I’m creating.

From one of the beams, I’ve hung an old witch ball on its iron chain that belonged to my great aunt. The fragile silver glass came unscathed through many house-moves and the bombing raids of World War II. Even when one house received a direct hit, flattening half of it, the witch ball was discovered still hanging from its hook, dusty but unmarked. My great aunt said that if a demon looked in through the window it would see its own face in the silver ball and flee in terror. So far, it’s worked! And if that doesn’t keep the demons at bay, maybe my gargoyles, grimacing out of the bushes, will.

Another object in my office is a pewter flagon, which plays a small but vital role in the thriller, The Drowned City. My flagon isn’t as old as 1606, but it does have one feature which the flagon in the novel doesn’t. Under the base is a pewter grid enclosing a pair of bone dice. Perhaps when drinking companions had emptied the flagon, they used the dice to decide which of them should buy a refill.

Whenever I can escape from my office, I have the dramatic and beautiful West Country landscape to explore – moors, cliffs, isolated coves and hidden valleys – but I’ve come to understand they change not just with the seasons, but by the hour. One minute, the moor or coast is sparkling in warm sunshine and the next it’s menacing, and potentially deadly as the mist rolls in, or the sun sets. The move to Devon has made me more conscious of forests, moors, and towns as living characters within my writing, not simply scenery. The places have moods, like people, sometimes friendly, but they can turn angry or vicious. No wonder the West County is steeped in legends about every granite tor or rocky cove – a pirate’s treasure chest of ideas for any writer. And because so many places still retain their old features, you can almost hear the ghosts whispering around you.

Blacksmiths were once regarded as sorcerers, because they possessed the alchemists’ secret of transforming the base elements of fire, earth and water into the iron tools on which everyone’s livelihood depended. I like to think novelists have a little in common with blacksmiths, taking the raw elements of words, research and imagination, and hammering them into a plot. And during those sticky moments, when the ideas won’t line up, or the scene has to be reshaped, the ghost of that old blacksmith standing behind me, reheating and hammering over and over again, keeps me pounding my keyboard. Sometimes, I swear I even glimpse his face in that witch ball.

K.J. Maitland has previously written eight medieval thrillers under the name of Karen Maitland, and also writes as one of the Medieval Murderers.