Daniel Radcliffe becomes Mother Nature’s plaything as Yossi Ghinsberg, an Israeli who survived three weeks in the Amazon Rainforest during the early 1980s. Jungle, Greg McLean’s adaptation of the Ghinsberg’s autobiography, is a confused film that can’t decide if it wants to be a barebones survival flick, a jungle fever dream or a sweeping epic. It isn’t the most satisfying movie, but Radcliffe supplies enough determination to make you care as he removes a parasitic worm from his forehead.

Before McLean throws us into the deep green sea of trees, we follow Yossi as he meets up with Kevin (Alex Russell) and Marcus (Joel Jackson) in La Paz. He has been travelling the world to rage against the life route of school, university and a job. He wants more than a provincial life, and the group is brought together efficiently by writer Justin Monjo. The early moments of the film set up why these three men would follow Karl (Thomas Kretschmann, suitably grizzled), a complete stranger, into the wild.

The filmmakers seem to be punishing these characters, and real life backpackers, for their smug superiority and how they exploit the countries they visit. McLean leans heavily on twee romanticism as he sets his film up — these characters are having the time of their lives and the tone reflects this. The film is a joy as the characters amble along exploring the world. It’s only when the jungle spoils their travelling appetite that they, and the filmmakers, lose their way. 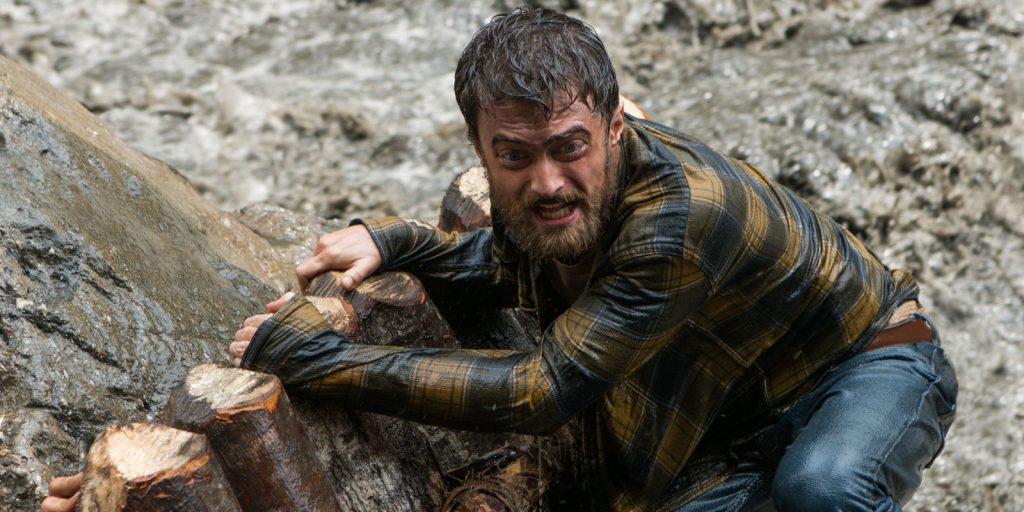 The jungle should be the titular character of this piece, but unlike the great The Lost City of Z, it never feels alive. McLean struggles portraying it as more than a setting, as more than his torture chamber. As the characters splinter, the jungle never feels like it is forcing them apart. The underprepared adventurers — who wears a white t-shirt in the rainforest? — break up for multiple reasons, leading to an unfocused narrative as McLean doesn’t develop the group tension in a satisfactory manner.

There is too much fat on this survival story as the focus shifts between Yossi’s survival, the rescue effort and kitschy flashbacks. Each bit feels like it belongs in a different movie and they detract from Radcliffe’s dedicated performance. The film has fun torturing its leading man. He crawls through quicksand, eats bird foetuses and fights a jaguar with deodorant. Yossi macgyvers his way to survival and Radcliffe uses his post-Potter indie spirit, a strong attempt at an Israeli accent and his characteristic determination to craft his best performance. It does feel like he would go to hell and back for his work, and McLean has no problem pushing him there.

As is par the course for a jungle survival story, there must be a hallucinatory moment. McLean cuts loose during these moments, unafraid to go fully macabre. He conjures up some interesting images, but it’s hard not to think of the moment in Tropic Thunder when Ben Stiller gets lost in the jungle, trips out and kills a panda. When you’re reminded of something that lampoons what you are currently watching, you know something has gone wrong in Jungle.

Jungle is available on Digital, DVD and Blu-ray from 1 January 2018.