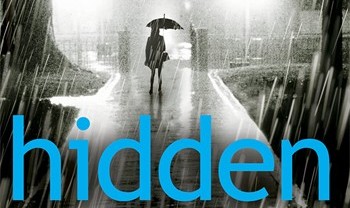 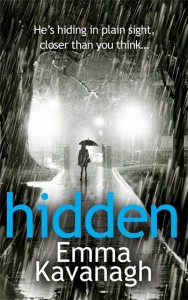 Hidden opens on Sunday, 31 August at 10:33am: a heatwave has recently broken, a lone gunman goes on a shooting spree and a hospital lobby becomes a scene of mayhem after. Charlie can smell the blood. Rewind a week and the true story of the novel unfolds as we count down the days and hours towards the inevitable ending through the eyes of the four people inextricably tied up in the events: journalist and crime reporter Charlie, hospital psychologist Imogen, police fire arms officer Aden and the shooter himself.

This novel has a simple premise that is extremely well-told – unstable individual poses a threat, eliminate threat before it’s too late – and through masterful storytelling, Emma Kavanagh ensures that we are suitably invested in the story’s unfolding. Everything about this book was tense. From the horrific opening via deep-rooted flashbacks that continue to resonate to the final so-quick-you-barely-have-time-to-catch-a-breath closing chapters, Hidden is a novel that keeps you on the edge of your seat through every word. Even the heatwave was palpable.

While there wasn’t much to distinguish between the four voices as individuals, each character provided a new perspective and a new clue in figuring out the identity of the killer – which, as the novel went on, could very likely have been anyone. Charlie was undoubtedly the novel’s shining star, her role as an investigative journalist being the driving force in uncovering many of the mysteries hanging over the small Welsh community. But it was Aden who I found myself warming to the most, haunted as he is by an incident that took place over a year before the beginning of the novel, and one which has lasting ramifications on the characters and the decisions they make.

Hidden is Kavanagh’s second novel, and in it her experience as a former police and military psychologist is evident. Beyond the immediate gritty drama of the whodunnit driving the plot, this story also becomes about dealing with life or death situations and how they affect you. It’s a very clever, very well thought-out storyline, with plenty of red herrings acting as stumbling blocks on the reader’s quest to figure out the identity of the gunman before the characters do (I called it – but my assuredness definitely took a blow or two as more information was revealed).

Beginning at the end may usually be a sure-fire way of taking the thrill out of the story but here it just made the countdown all the more electrifying.