‘The Spoils of War’

I had planned to start this review by discussing the great, big, obvious talking point of the episode; that is, the great, big, obvious battle that ended it. And I did, only I found there was rather a lot to talk about, because, entertaining though it was, the battle was eerily reminiscent of the flaws found in the Battle of the Bastards and elsewhere. So, that’s here, to save the effort of those who would prefer to avoid another 1000 words of me criticising Thrones battles.

Sticking to broader points, I will say this: whether Jaime survives or not, how big a force does Cersei have left? The numbers have been pretty murky this season, mainly to allow for constantly uneven dramatics on the field of battle, but in terms of ground military factions, who else can she call on beyond the main Lannister forces, or the Tarly army, both of whom were predominantly slaughtered this episode. Does this mean she’s basically going to be down to Euron – who is predominantly naval; those still in King’s Landing – who are surely the worst available, if the best went off to actually fight – and however many of the Golden Company Tycho Nestoris can magically summon to Westeros?

It’s this last point that interests me, as following that to its potential conclusion means that the battle for Westeros would end up being a Westerosi queen with an Essos army, against a Westerosi queen with an Essos army. If the writers still care about the concept of patriotism surrounding the drama – as raised back in Meereen with the question of whether Westeros would welcome Dany back, when she appears a foreign invader with a foreign army – then that creates a situation where, should his real heritage be revealed publicly, Jon becomes the only ‘true’ Westerosi option. But that’s just speculation.

‘The Spoils of War’ was an exceptionally short episode of Thrones – the shortest the show has had, in fact. And it showed. The scenes we had weren’t really shorter than usual, there were just less of them. Or rather, far fewer of them, with the amusing reminder of who Davos once advised. And, as is natural these days, they were all significant in some way or other. 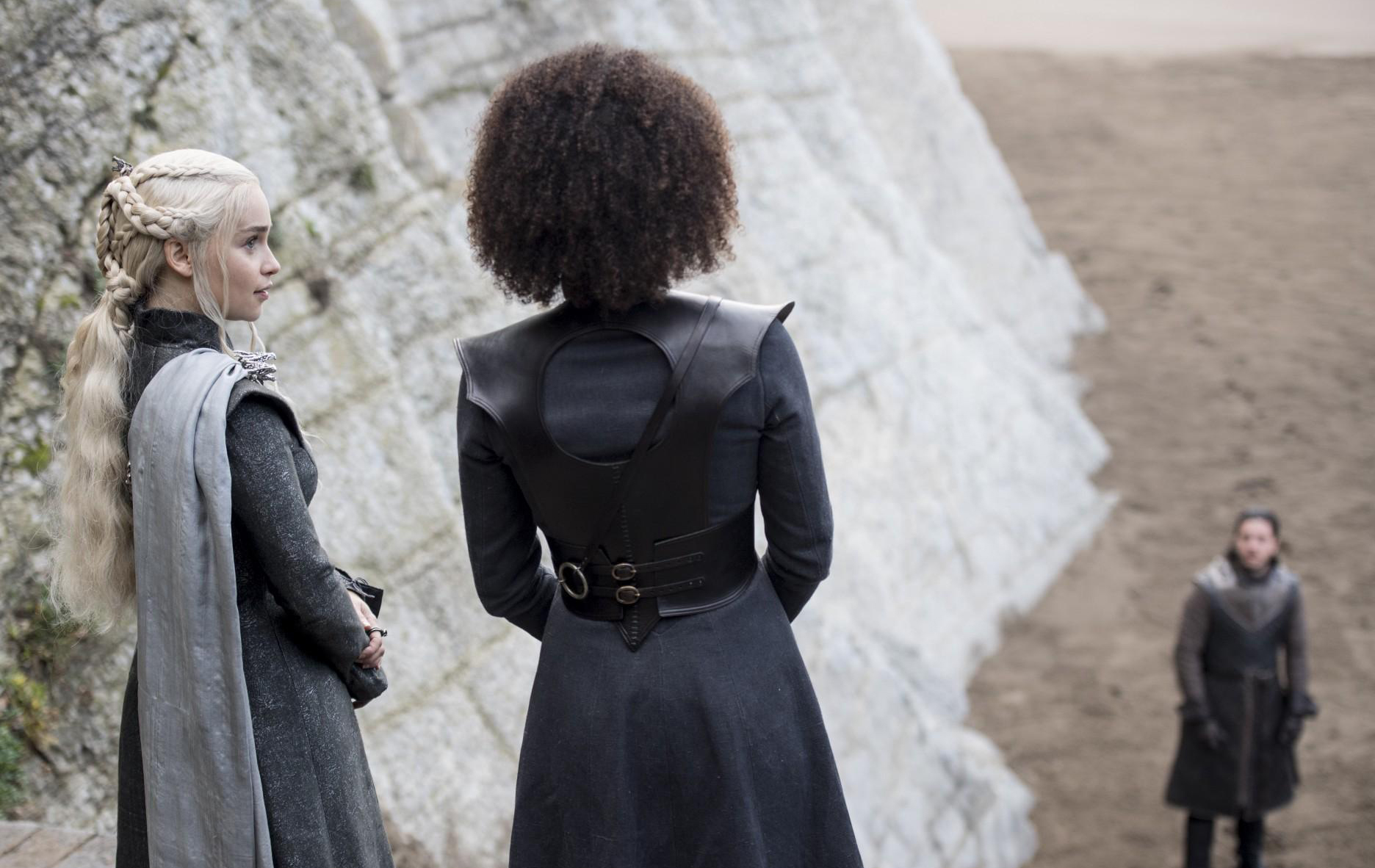 In the case of Dany’s earlier scenes in the episode, they were significant in more ways than one. The first, was in the confirmation that the Dragonglass is actually there. It seems silly, but in a season of ‘gotcha’ moments, it was almost conceivable that the caves would either be empty, or only hold enough of the stuff to make a small trinket or something. But it’s there, there’s enough of it to make every weapon until the end of the show overall, and it looked quite beautiful too.

But of course, that wasn’t all that was in the caves. Deeper in, Jon found ‘evidence’ to prove to Dany that ‘the enemy has always been real’. Ignoring the fact that it would be completely in keeping with Dany’s character to assume that Jon had just drawn it all himself to convince her, it was a moment that was impactful, but perhaps not as much as it would have been if we had never seen the creation of the White Walkers through the Three-Eyed Raven and Bran. In any case, it served its purpose, to show Dany, but it feels like the real proof will be when she eventually sees them herself.

Still, Dany’s agreement to fight for the North against the White Walkers came combined with the unsurprisingly reaffirmation for Jon to bend the knee to her. Really, the surprise was that Jon didn’t find the nearest wall to bang his head against. She might be right that it’s his pride stopping him from agreeing – though there is also the issue of whether the North would really follow suit, just because he tells them to – but then, isn’t it just her pride that makes her keep asking? She wants to be able to say she’s the ruler of all Seven Kingdoms, and he wants to be able to say he’s King in the North.

Obviously, this does seem to be heading to a natural resolution, one that has been on the cards for a while: marriage. After last week’s platonic, diplomatic stand-off between the two, this week introduced unmistakable ‘chemistry’, from Jon’s demeanour in the caves – indeed, after Ygritte, the fact that he even brought Dany into a cave is suggestive – to Davos’ wry remark about “staring at her good heart”. It’s bound to happen, unless, that is, Jon’s true heritage gets in the way. 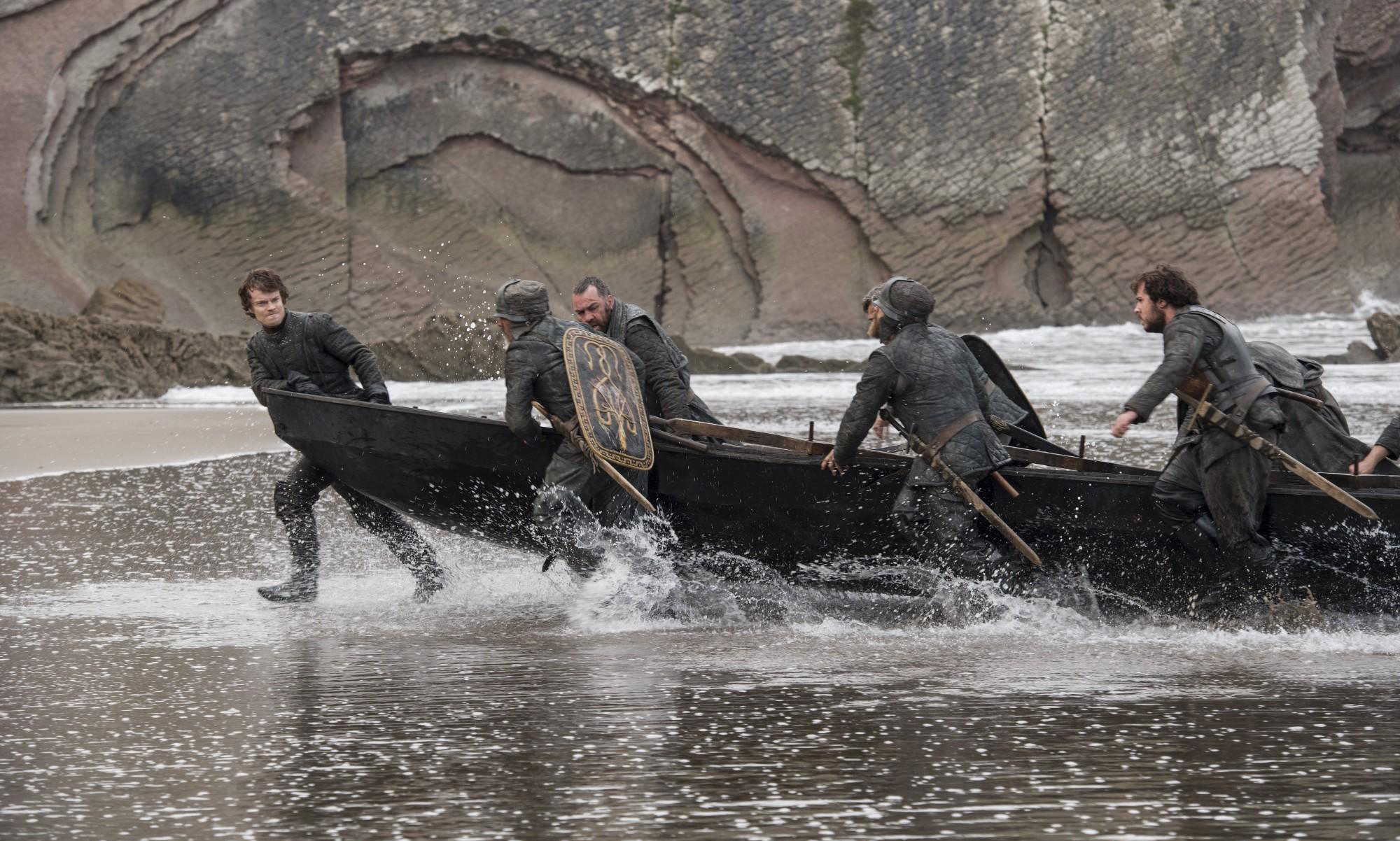 Jon’s reunion with Theon wasn’t the main reunion of the episode, and it seems like a pairing that’ll feature more next week than this. But then again, what more can be said; it’s an impasse that is hard to break. Jon can never forgive Theon, and Theon can never forgive himself. What more is there to say?

Season 7 has slowly seen the Stark band get back together at Winterfell, and this week brought us as close to a full set as is possible amongst the ‘trueborn’ Starks still alive, as Arya finally made it home. The meme-ready expectation of her return was that it would be pretty much like Bran’s; “So Arya, what happened to you?” “Well I went to Essos, learnt how to change my face and killed all the Freys”. ‘The Spoils of War’ built in that direction, but progressed carefully, rather than exploding all at once.

Tracking Sansa’s reactions made for an intriguing element. Her initial laughter at Arya’s list in the crypts didn’t last long. Bran’s reference that the list was genuine seemed to bring a small smile to Sansa’s face, but seeing Arya’s capabilities with a sword did not. If anything, she began to look as scared as one might expect her to at the realisation that her last sibling to return was just as unhinged as the rest.

Meanwhile, Bran continued his departure from even being Bran. A particular line of this episode summed it up perfectly; “I remember what it felt like to be Brandon Stark. But I remember so much else now.” Having seen all he has seen, ‘his’ life is almost non-existent versus ‘all’ life. It also makes for a brilliantly jarring portrayal by Isaac Hempstead-Wright. His reaction to Meera’s departure is basic, meek, indifferent; best of all, she calls him by name, and his hollowed-out response of “I’m not anymore, not really” is haunting. It also seems that, like his siblings, Bran enjoys a drawn-out murder; judging by his “chaos is a ladder” remark, he knows of Littlefinger’s betrayal of season 1 and in general. Either he really doesn’t care anymore, or Littlefinger has yet another danger to add to Arya, Brienne, Jon, and eventually Sansa.

Outside the battle, there was only half an hour of an episode. Compared to last week, that’s literally half an episode. But it was a strong 30 minutes, building on existing tensions and previous relationships well. The battle was entertainingly flawed, but that’s not enough to detract for the successes elsewhere, as we tick towards the last ‘normal-length’ episode of the season.