Game of Thrones’ Field of Fire: Entertainment versus logic

Since the beginning, Game of Thrones has thrived on exploiting its character’s rivalries, to pit those who the audience has built up a relationship with against each other. Ned Stark’s beheading was an instance of this, though on a smaller immediate scale, and with less ambiguity over the ‘good and evil’ of the moment. ‘Blackwater’ remains the best example; Stannis’ rightful claim – bolstered in the empathy stakes by the good nature of Davos, and mitigated by Melisandre and their murder of Renly – against the King’s Landing lot – bolstered by the good will for Tyrion, mitigated by Joffrey et al. If the battle takes place between two sides with equal investment, then in theory, the battle itself should be less of an A-to-B exercise of removing a ‘bad guy’ (or giving a ‘good guy’ a setback), and more of an exploration of how those characters might reasonable act in such situations.

So, in theory, the battle – perhaps ambush is more appropriate – that came at the end of ‘The Spoils of War’ should have not just been wildly entertaining, but thematically and characteristically intriguing, especially after the Battle of the Bastards and other, more binary, face-offs of recent seasons. One particular character did capture that moral ambiguity of quasi-protagonist versus quasi-protagonist: Tyrion. From his vantage point high and away from the fighting, Tyrion was unavoidably forced to confront his loyalty. There wasn’t a question of abandoning Dany, rejoining the Lannister cause or anything like that, but there is a vast spectrum of possibility between the slightly sadistic pleasure Dany derives from burning her enemies, and fleeing the field of battle a la the Hound. What was clear, and most interesting, is that it wasn’t just a case of philia, of exclusive concern for Jaime’s welfare – which seemed more like a near-death facepalm than anything – but near-horror at the fate of the Lannister forces too.

“It always seems a bit abstract, other people dying.”, Tyrion’s line to the Great Masters in ‘The Battle of the Bastards’, has always been slightly applicable to him too, as a wealthy man prepared to throw others into the flames ahead of him. Yet here, they weren’t other people, but his people, as Dany had earlier mentioned, and as the Dothraki guard reminded him in the moment, in terms of family loyalty, and perhaps a kind of Westerosi patriotism too. And they were being slaughtered. Indeed, with Tyrion having largely been restricted in his potential over the season or so by Dany’s side, this was a refreshing reminder of the clash between his heritage and his allegiance.

But Tyrion’s role in the battle was able to be thematic and character-based, largely because he wasn’t really part of the battle. If Jaime et al. had somehow triumphed, then Tyrion would have been there to kill or capture, but as far as the immediate events went, he was observing not participating. 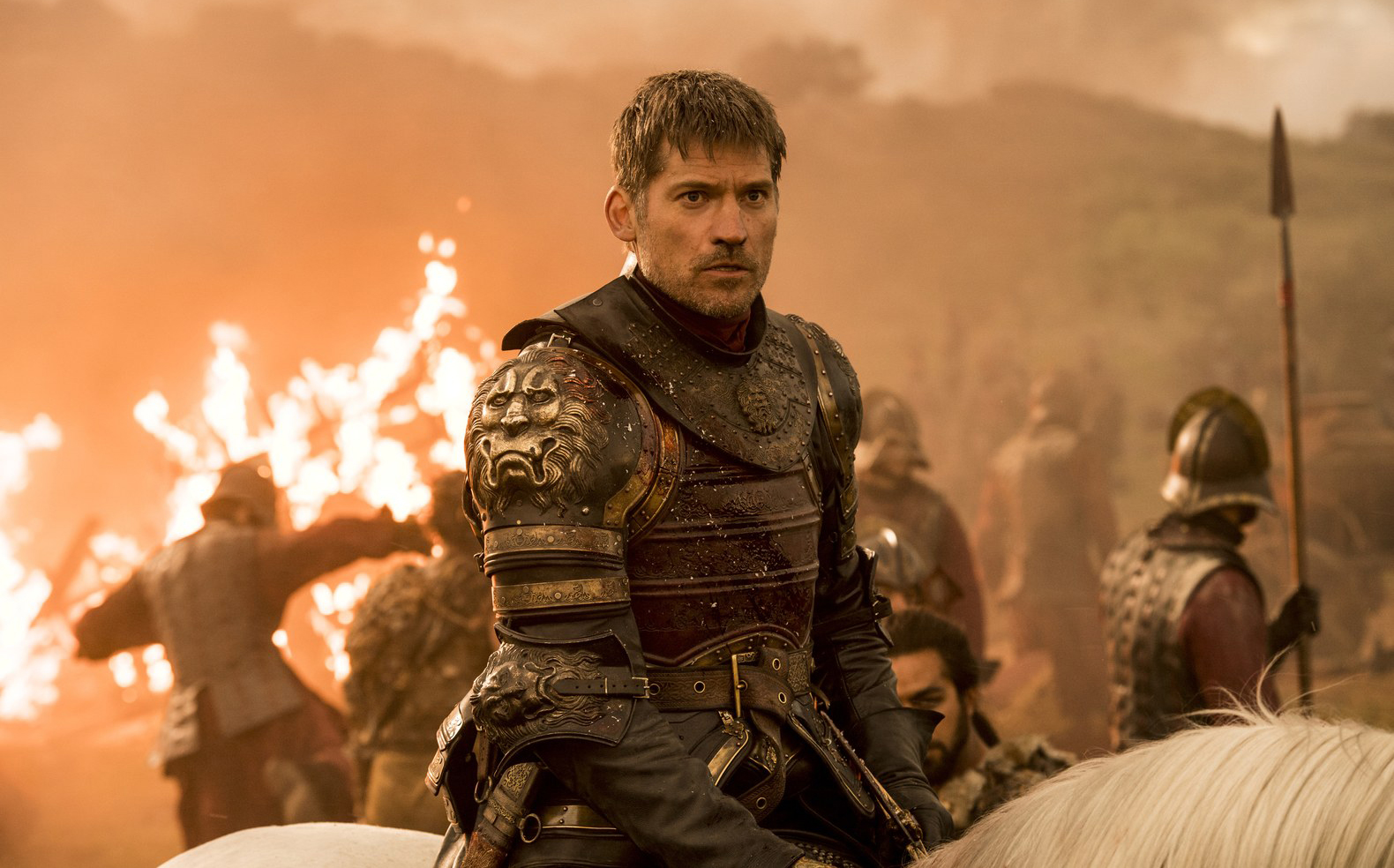 Amongst those who were participating, though, there were flaws that were eerily, and worryingly reminiscent of the aforementioned adrenaline-fest between Jon and Ramsey last season; moments where the survival of key characters was completely inconsistent with the logic of how their survival is portrayed. And where the Battle of the Bastards spread a few such moments across nearly half an episode – once the fighting actually got going – here we had more, over a far shorter period. In no particular order: Dany not being thrown from Drogon as Drogon writhed and fell once shot; the Dothraki comprehensively breaking through the Lannister lines, behind which Jaime and Bronn were waiting, but somehow not getting to either until sometime later in a different context; Bronn doing a Jon and managing to stand still in the middle of absolute anarchy and survive; Bronn jumping clear as Drogon burnt the scorpion, and finally, Bronn coming out of nowhere to fling himself and Jaime out of the way of dragonfire, from within touching distance of Drogon, into a conveniently placed lake.

Now, Jaime and Bronn might just die at the start of next week. Indeed, they should just die at the start of next week, because whenever they get out of that water – if Jaime does given the final shot – they’ll find Drogon, Dany, and a load of Dothraki waiting for them. But the fact that this episode was setup to let them survive until now, thus avoiding countless natural and dramatic potential deaths, suggests they have a larger role to play, even if that role is just a final scene with Tyrion for either of them.

As I’ve said before, in my ‘BotB’ review and in discussion with friends, the basic idea of key characters surviving is never the issue. A fiction, however much of a GRRM-like ‘gardening’ approach one takes, is ultimately artificial, guided exclusively by the writer’s whims. And it’s possible to force survival well; Jon was really always going to survive Hardhome, but the battle there made sure to stay the right side of possible within the context of Thrones. Subsequently, it stands as my favourite battle of the show. If Jaime is meant to survive, then Jaime is meant to survive. But at least make it make sense that he survives. There’s a difference between an experience one shouldn’t survive, and an experience one couldn’t survive. Dramatically, the former has value to a character, whereas the latter just extinguishes the tension, and diminishes the character development. Their survival becomes an ‘act of god’, where ‘god’ is the writer, rather than a result of the characters own actions.

For a viewer like me, it’s hard to know how to process scenes like this, on a show like Thrones. The first time I watched it, live on the 2am simulcast with the American broadcast, it had the hairs standing up on my arms and neck. The second time I watched it, midday Monday on demand to see if I missed anything, the same reaction. Viscerally, it supplies the kind of thrills that surely every viewer of the show enjoys on some level. Seeing a dragon fly over and burn stuff on the ground would be vaguely exciting without context or character; just look at the rather forgettable Reign of Fire. Add in both context and character, and have it become Drogon versus the Lannisters, and it’s amplified. But the original brilliance of Thrones was combining this visceral entertainment with at least some kind of intellectual element at a character level. Yet such scenes seem a distant memory compared to now, and what remains is entertaining, but at the cost of logic.