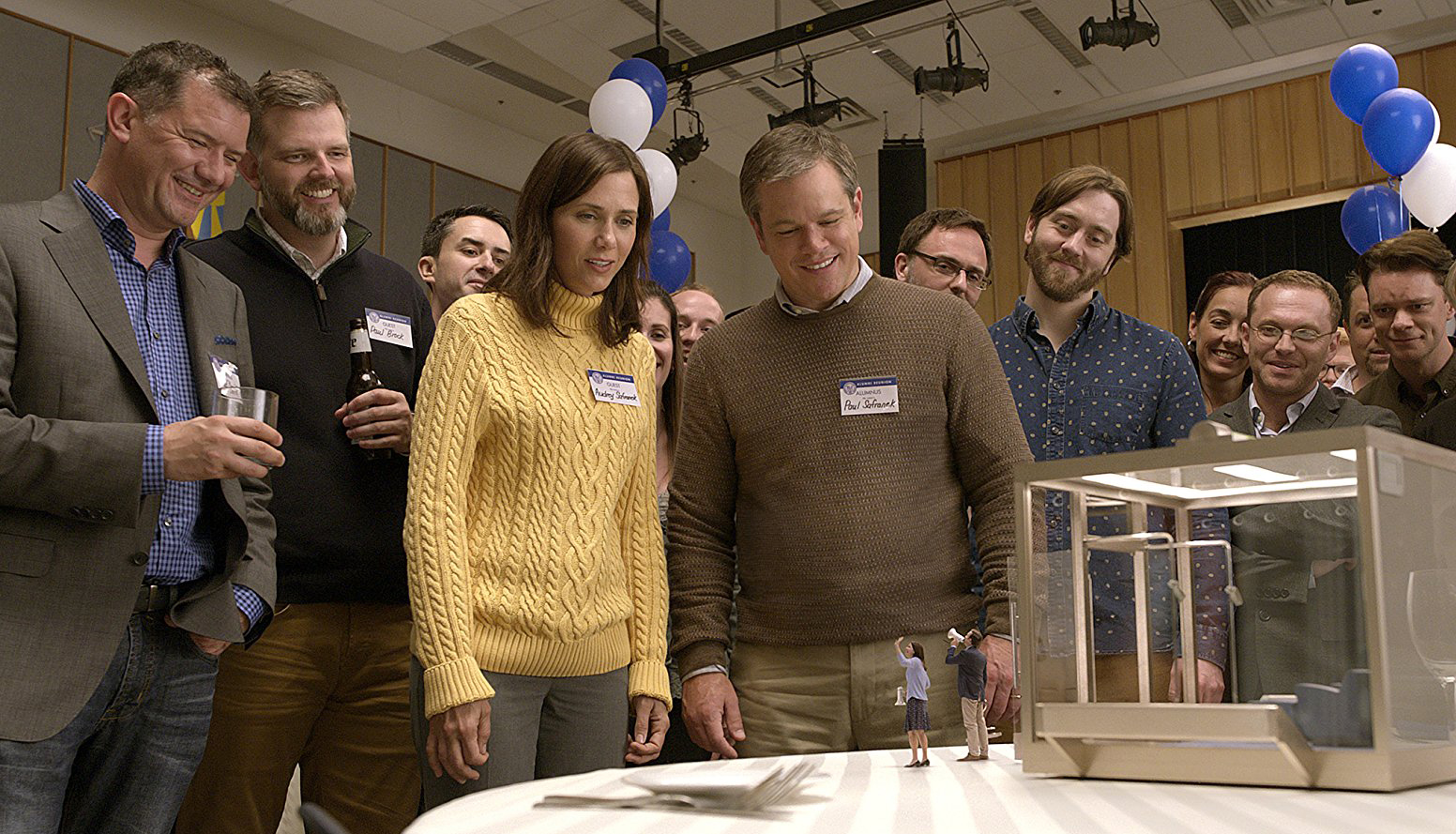 It’s the near future, and the planet is facing an overpopulation crisis. Dr. Jorgen Asbjørnsen (Rolf Lassgård) has found a potential solution; a method of safely shrinking humans so they are just five inches tall, cutting down on consumption of food and energy, and creating less pollution. Needing a change, occupational therapist Paul Safranak (Matt Damon) and his wife Audrey (Kristen Wiig), decide to take the plunge.

No other form of movie advertising has the damaging potential of a trailer. A poster can inspire mockery, and a press junket can create a brief controversy. But neither carries the weight of a trailer in informing an audience whether or not the advertised film is one that they will enjoy.

It seems that the trailer for Downsizing was largely responsible for the mixed reaction upon its release in America. The trailer implies that the movie is going to be a broad comedy; a Honey I Shrunk The Kids for the twenty-first century. It features Saturday Night Live alums Kristen Wiig and Jason Sudeikis a disproportionate amount to the length of time they actually appear in the film, whilst real leading lady Hong Chau is seen for around one second. And the theme, Downsizing’s real raison d’être, is brushed aside in half a sentence, easily overlooked by an audience just wanting laughs without having to think. 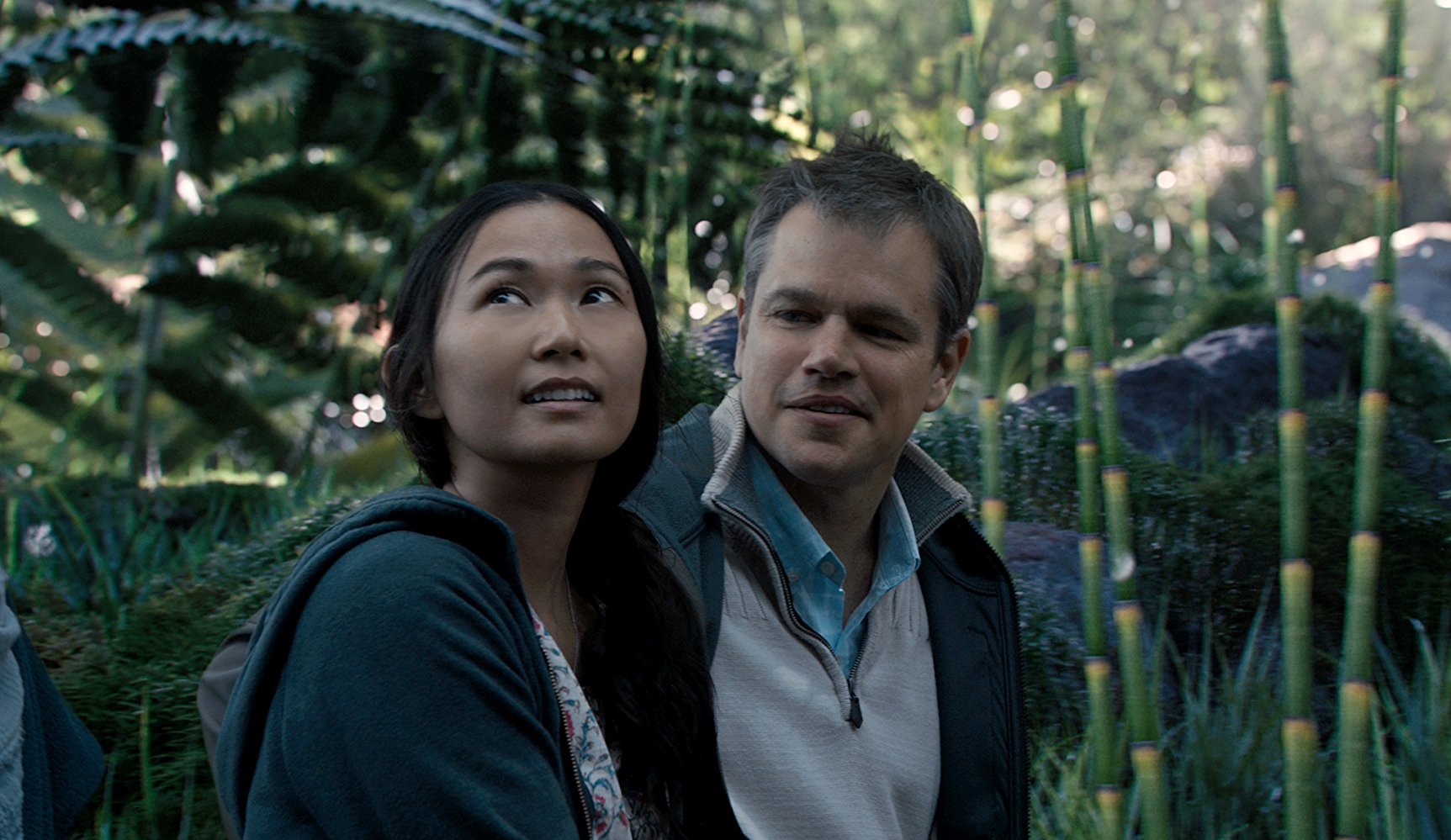 Downsizing is full of funny moments. Writer-director Alexander Payne wrests a lot of humour from the actual process of downsizing; the balletically choregraphed sequence of Paul becoming small (he’s lifted from his tiny hospital bed on a spatula), is hilarious. Little inventive touches, like the special compartment for small people on the bus shared with the regular-sized, and the normal rose that small Paul hefts as if it were a boulder, are peppered throughout. There’s the wonderful, bizarre odd-couple of Udo Kier and Christoph Waltz. And, of course, relative unknown Hong Chau, who completely steals the show.

The film, however, aspires to be more than just a comedy. As Paul is getting used to his new smaller stature, he meets up with Ngoc Lan Tran (Chau), a Vietnamese dissident who was forcibly shrunken, escaping to America in a TV box. With Ngoc, Paul travels to Norway to visit Dr Asbjørnsen and the first colony of downsized people. It is this adventure that changes Paul more than the physical process of downsizing, and it is in this third act that Payne gets around to talking about what he really wants to talk about – his fear over the fate of our planet.

This third act, and Payne’s jolting pessimism about our future, may seem at odds with where Downsizing started, but the journey from beginning to end (and at 135 minutes, it’s a long one) is deliberate, and under Payne’s watchful eye, never threatens to go off the rails. The finale pulls the larger threads of the movie together satisfyingly, finishing with a philosophical dilemma and an ambiguous final shot that are both sure to provoke post-credits discussion.

It may unfairly prove to be Alexander Payne’s least popular film, but it is far and away his most ambitious. Downsizing is a fun, thoughtful movie with an enormous scope. We’d be lucky to have more like it.

Book Review: The Two of Swords – Volume One by K. J. Parker