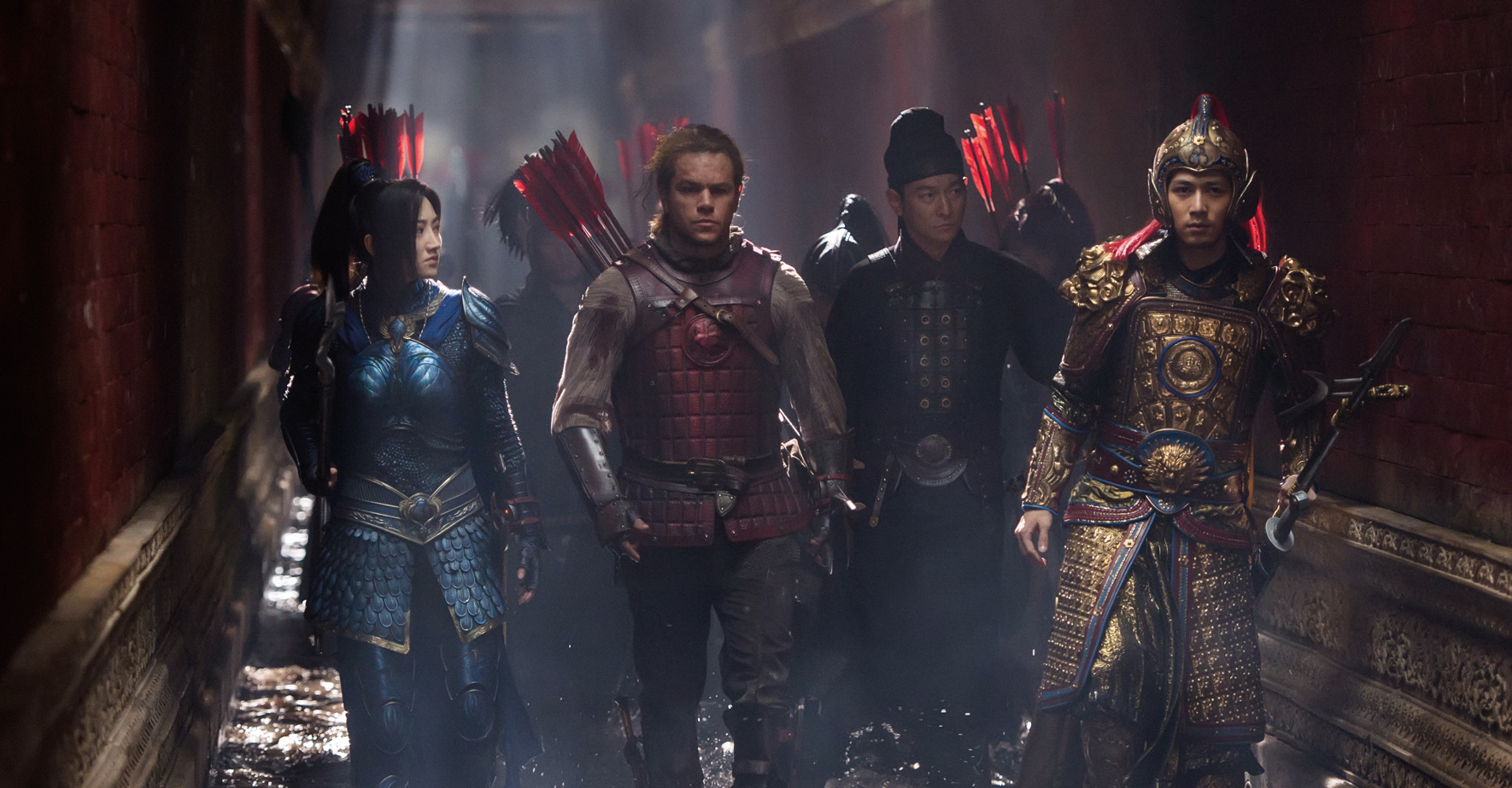 The continued evolution of computer generation might have hailed a new era for cinema but an unfortunate side effect of that innovation is the trend for outlandish CGI-heavy blockbusters that forgo the very foundations of decent filmmaking. Chinese director Zhang Yimou’s The Great Wall is a perfect example of Hollywood’s reliance on special effects. On the surface it’s the movie equivalent of an extravagant and expensive Fabergé egg – all snazzy and spangled and dripping in dollar signs – but crack that outer layer open and you’re left with nothing more than a hollowed out shell.

It’s the age-old, medieval ‘mankind faces extinction from a monstrous foe’ plot, as Matt Damon’s Irish mercenary warrior, William, is imprisoned within the Great Wall of China whilst searching for ‘black powder’. His captors are an elite army defending their country – and later, it transpires, the whole world – from ancient, mythological monsters. Along for the ride is Pedro Pascal’s fighter-for-hire Tovar, who rolls out hackneyed one-liners like he’s relaying them from a crap novelty book he won in a raffle. 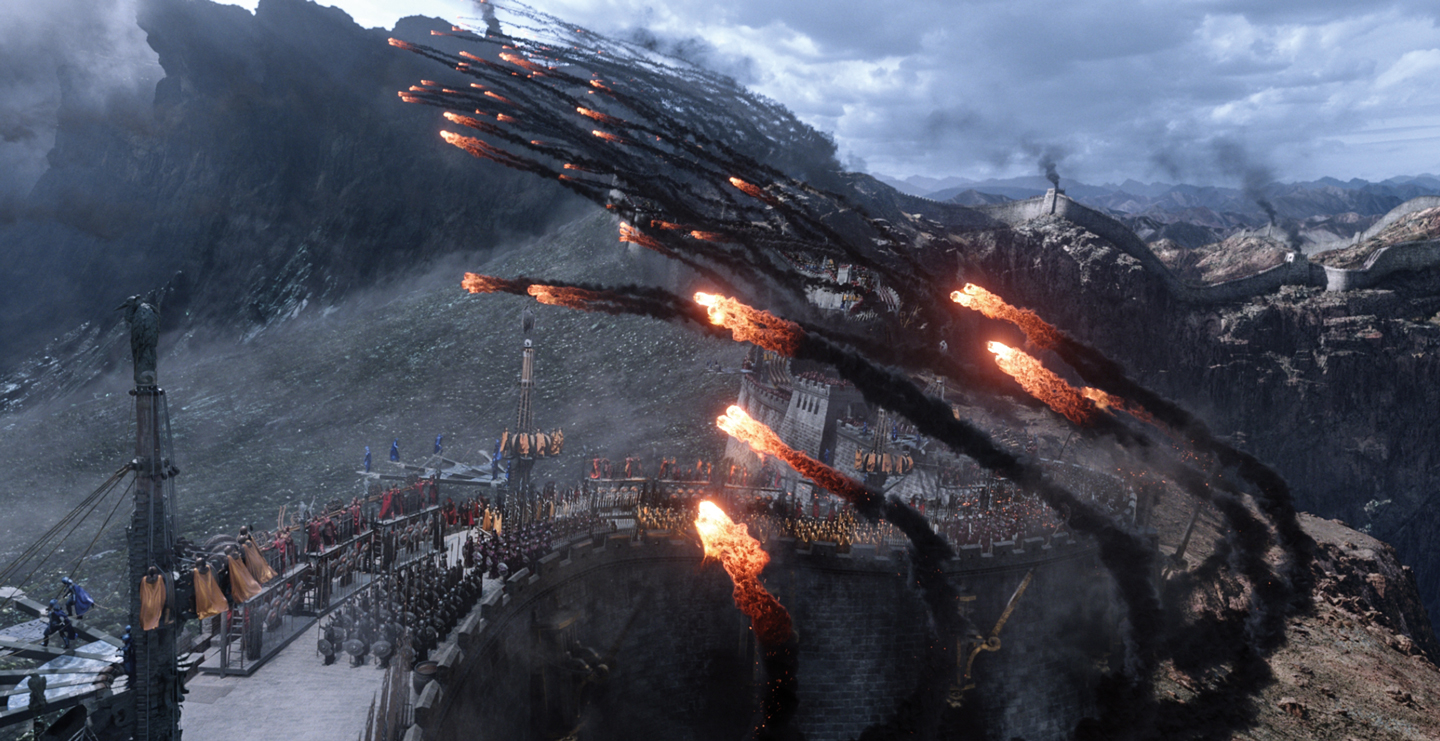 A couple of lazy plot devices later and the two skilful fighters find themselves caught up in a battle of epic proportions, featuring bungee jumping female warriors and mankind-eating monsters that look like the ugly love-child of a Middle Earth Warg and a Jurassic Park Dilophosaurus. William wants to do the right thing, whilst Tovar simply wants to escape with their lives and their newfound bounty, causing friction between the two comrades. As the Chinese warriors face more waves of attacks from the Tao Tei, William is forced to choose between his greed and the good fight. Can you guess which he ultimately lands on?

Given this is the biggest China-Hollywood co-production ever and it was directed by the man behind House of Flying Daggers and the 2008 Beijing Olympics opening/closing ceremony, you’d expect The Great Wall to look amazing. And, to the director and his special effects team’s credit, the visuals are a sight to behold. The initial battle sequence, which sees the elite Chinese army getting into position on the wall (split into colours depending on rank) and unleashing a defensive assault, really wouldn’t have been out of place at the Olympic Games. It’s beautifully executed and provides a glimmer of hope after a lacklustre start. However, once the initial thrill of the martial arts battle dance is over, all subsequent fight scenes feel like a retread.

The film moves quickly to establish William’s ability to aid his captors with a bow and arrow and his man-of-the-world western thinking. The problem is, William is such a one-note character that you can’t really believe that an elite army would actually rely on his help to save the world. Damon is the type of actor who can turn his hand to most roles, but medieval warrior with a ponytail is not one of them. There’s a lack of grit and ferocity you’d expect from a character who’s ostensibly had to steal and fight his way through life. This is Damon playing dress-up, rather than Damon encompassing the role.

Pedro Pascal proved how charming he could be in Game of Thrones but as Tovar he’s reduced to comic sidekick, minus the humour. A scene where William jumps into the midst of the monsters, having to rely on his ears rather than his eyes as beasts fly at him through the mist, could have been spectacular but is rendered laughable when Tovar literally swoops in to save the day, uttering in Pascal’s – usually magnetic – lilt: “I’m only saving you so I can kill you myself.” Groan.

Jing Tian’s Commander Lin is a shining beacon in a film that attempts to champion women by putting them on the front line as the fiercest warriors. Whilst it’s implied that Lin could be William’s love interest – in another life, where she isn’t commanding a gymnastic army – thankfully the script doesn’t force an unnecessary romance between the two. Then there’s Willem Dafoe, whose presence in the film is completely redundant, except to explain how some of the Chinese army can speak English. Honestly, nobody was really asking the question to begin with.

The Great Wall is almost arrogant in its laziness, taking one of the greatest wonders of the world and turning it into a bit of a joke. And whilst the mix of live-action and stylish special effects offers plenty of indulgent CGI entertainment, which is admittedly enjoyable at times, it’s difficult to get past the wooden acting, head-shakingly bad dialogue and illogical story. This might be a spectacular display of visuals but it’s not one anyone’s going to want to watch twice.