Is there anything more typical of sci-fi and horror than space zombies? Ask someone on the street for a ‘sci-fi setting’ and they might say Mars, but chances are they’ll just say ‘space’. It’s familiarly unfamiliar; an ‘alien planet’ might be different, but it’s a constructed different that doesn’t have to play by the rules. Space though, well, we know about space. It’s right there. There’s a natural fascination with space that’s only amplified by culture. Zombies, meanwhile, are the perfect unhuman villain. They’re us, but not us, they can be explained away as the reanimated dead or ‘the infected’, and they look damn good in great big wide shots when sauntering slowly in packs.

So with all this factored in, how is it that we haven’t had space zombies before in Who? We’ve had zombies (all too often), and it goes without saying that we’ve had space, but I’m pretty sure we’ve never had the two put together before, on classic or revived Who. So, already that’s a big plus for this week’s episode, ‘Oxygen’, because it does just that. Technically, yes, it was the suits doing the moving, and the ‘organic elements’ were just dead, but if it’s dead and walking then it’s a zombie to me. 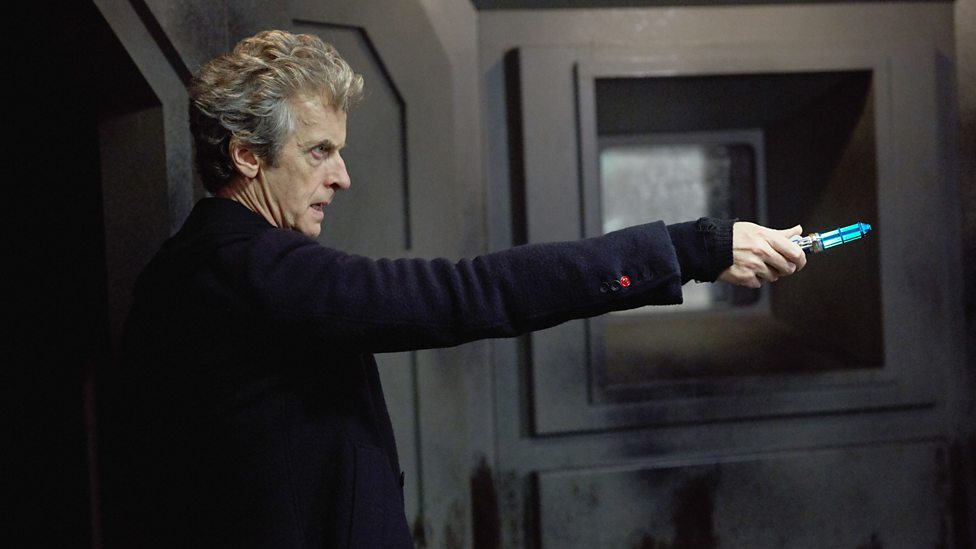 Indeed, there was a lot to like in ‘Oxygen’, which for me was the best episode to date. For a start, it was very tightly plotted – it didn’t tie itself in knots trying to be clever, but instead just went about its business. The Doctor, Bill and a reluctant Nardole respond to a distress call, and duly find distress. The oxygen’s gone, nearly all the crew of the mining station are dead (one of whom we saw die in the unusually character-driven cold open), and yet, the suits are still standing. The get-out-of-jail clause of the TARDIS ‘air shield’ is removed pretty quickly, and soon after, the Sonic Screwdriver gets bent completely out of shape (though my Chromecast still works when it gets bent to a 90-degree angle and back, so maybe the Sonic isn’t as sturdy as an alien skeleton key should be). Right away, there’s a clear and present danger, a fear-factor and a ticking clock before what little oxygen is left, as the central threesome are forced to don the homicidal suits themselves.

From there the plot isn’t so unusual for Doctor Who: We meet the survivors, they’re sceptical of the Doctor – I mean, wouldn’t you be? – and on things go until the Doctor saves the day in the nick of time. There are two major twists, but they’re major for their shock value, and less so for actually having an impact on the direction of the episode. Exception 1 sees Bill succumb to the suits and join the legion of the dead. Of course, she’s not really dead and is revived or resurrected (can you resurrect someone who never died?), but more importantly, would much have changed if she had never even ‘seemed’ dead? In ‘death’, Bill simply becomes a more recognisable head zombie at the front of the pack, and in her absence, the Doctor does what he always does and comes up with a daring solution. The twist of her absence would’ve worked far better if her role in the episode until then had been an active one, equal to the Doctor as has been the case previously, rather than a more passive ‘troubled passenger’.

Exception 2 was, of course, the Doctor going blind. Now, it’s quite clear that this is going to be important longer term – certainly in the next episode, and maybe beyond – but for this episode, it didn’t seem to affect much. There were a couple ‘blind character’ tropes – the Doctor walking into things, needing guided around a bit – but he mostly acted exactly how you’d expect him to act even if he could see. Indeed, given the issue plays a central role next week, I wouldn’t be surprised if it was incorporated into ‘Oxygen’ as a lead-in to ‘Extremis’, rather than as a plot device for ‘Oxygen’ itself. 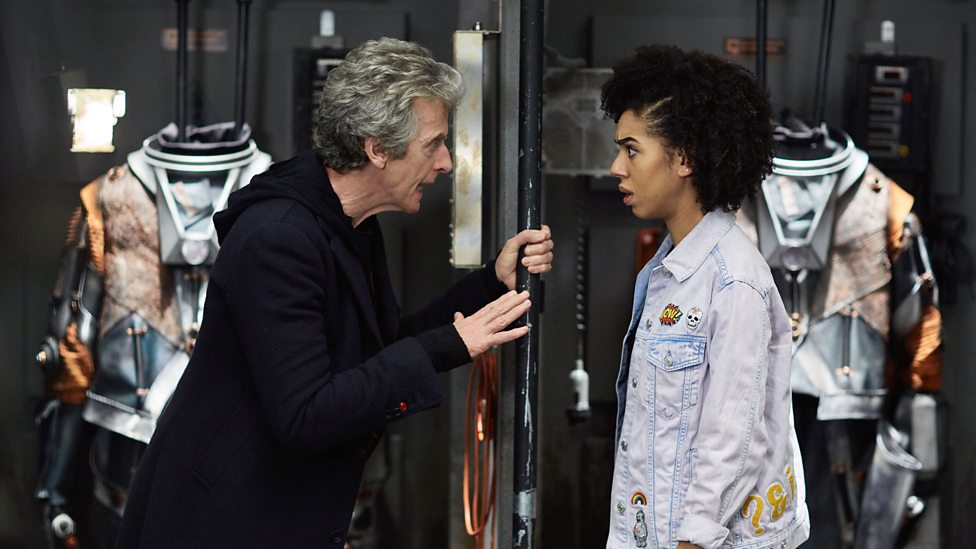 Still, though these two points were, like I said, fake-outs to an extent, they didn’t make the episode worse. They might have had a limited impact, but they did switch things up a bit. Bill’s reaction to seemingly being left for dead was a great moment. Part of her absolutely trusts the Doctor when he reassures her she’ll be okay in the end and that he’ll bring her back. Part of her, obviously, believes he’s just trying to reassure himself and that this really is the end for her. There was no chance of Bill really dying in a permanent, ‘leaving the series’ way, which does remove some of the emotion from the scene, but Pearl Mackie’s delivery of Bill’s uncertainty is still brilliant. As for the Doctor’s blindness, well, as I also said, that’ll be more relevant next week.

The plot was effective enough, but it was the thematic and character content that really elevated the episode. Most importantly (for me at least), this was finally an episode that treated death properly. The aforementioned cold open, that separated a couple who were prepared to start a family, could have just been a way to introduce the threat, but the ending to the episode allowed a resolution to the couple’s minor subplot. Rather the death of a background character being brushed aside or trivialised – the source of my complaints so far this series – it was given emotional value. Yes, Bill was brought back by tenuous means despite everyone else staying dead, but if anything, that was better. There wasn’t an ‘everybody lives’ moment like last week, and thus the deaths meant something. In fact, Bill’s flirtation with death meant that the Doctor took it seriously. Elsewhere, there was a fleeting and intriguing subverted exploration of racism, showing Bill’s shock and dare-I-say ignorance at meeting the blue-skinned Dah-Ren (note: not Darren), and Nardole popped up on occasion to remind us how much we still don’t know about the context of his and the Doctor’s current affiliation.

The reveal that the space zombie-ism was all down to ‘air capitalism’ was effective too. Yes, part of my enjoyment of that is probably down to the delivery being unashamedly left-wing – the Doctor pretending to be from ‘the Union’, before dropping the two survivors off at ‘Head Office’ to make a complaint that leads to the end of the corporate galaxy – but it served the episode well as an explanation for why the suits were taking control. It wasn’t a megalomaniacal supervillain, or a vengeful deity, or a Solaris-like, ‘42’-like upset star. It was just the natural extension of efficient business, and that notion of efficiency ended up being the solution too. 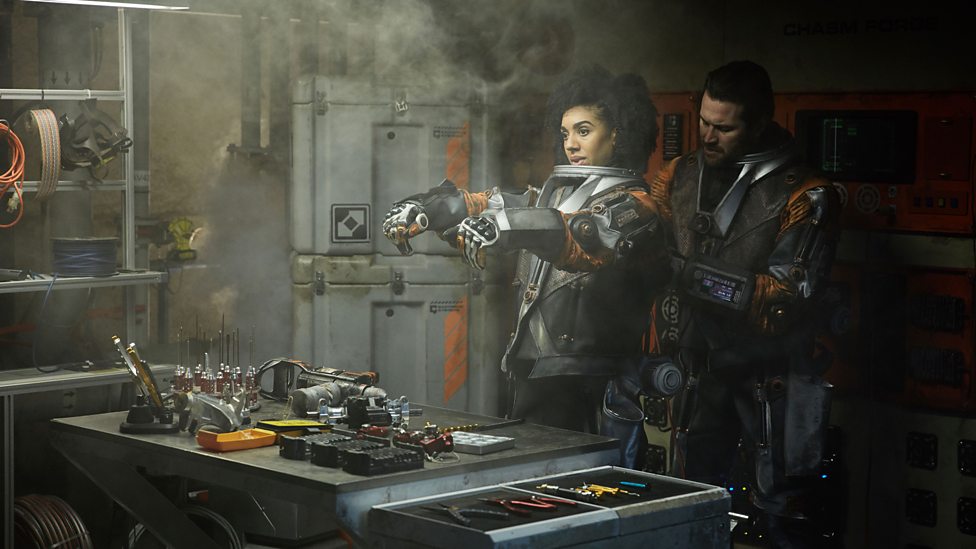 It’s not often I agree with Steven Moffat, but his instructions to writer Jamie Mathieson for ‘Oxygen’ was to ‘make space dangerous again’, and yes, I agree. More importantly, Mathieson did this, and the work of director Charles Palmer and the production crew did too. The effects of the show, as I’ve mentioned already this year, are now seamlessly impressive, weaved into each and every necessary moment rather than just being saved for the big bits, and the music here was sparse but foreboding. The episode, basically worked. The only thing that let down the suspense was, and this is a bit picky, that the zombie pose looked a bit weird. It made sense that all the dead had their heads slumped to a side because they were, well, dead, but if we’re going for logic, why didn’t any of them slump in the other direction? Generally, I’m sure an explanation involving the suits controlling the nervous system could’ve been cobbled together that enable them to have the heads bolted upright, unmoving and unblinking. It would’ve been just a bit creepier than the whole head to the side, arms outstretched thing, which seemed a bit corny when looked at for more than a couple seconds at a time.

Still, this was a great episode, in what may be the last largely standalone adventure for a while. Next week not only links into the Doctor’s blindness but is the first of a three-parter. Yes, you read that right, not two but three linked episodes. Whether it’ll be three in the vein of ‘Utopia’, ‘The Sound of Drums’ and ‘The Last of the Time Lords’, with one semi-connected episode leading into a more traditional two-parter, or a full blown 130-odd minute film in the middle of the series, we don’t know. But I always get excited for the mid-season multi-part episodes of Who, as they promise all the scale and spectacle of the season finales without the somewhat convoluted plotting necessary to top off each season. It’s a Moffat scripted episode, so it might be convoluted anyway, but we can live in hope.