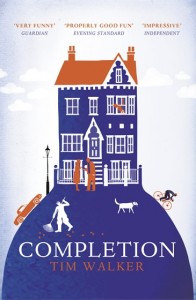 When it comes to the middle class people, owning real estate can be a major priority and Tim Walker’s debut novel, Completion, captures one couple’s obsession with a property and exposes their misplaced personal values. The story follows the marriage’s meltdown and the aftermath for the whole family.

Wittily told, this astute family saga centres on the Manvilles. At one time their carefully orchestrated family life was a glowing example to their peers. Their image was complete with the ‘House on the Hill’, their enviable north London home, blossoming careers and the de rigueur au-pair to ensure the home ran smoothly.

In the ‘perfect’ life, Jerry Manville was formerly a high flying, award winning ad-man. His artistic wife, Pen, uses their Highbury house as inspiration for her popular series of children’s books ‘The House on the Hill’, featuring the misadventures of two children. The Manville’s home is also the subject of regular features in newspaper lifestyle sections.

When Jerry takes his focus off his wife and family and shifts his attention to the au-pair, it is the beginning of the end as he leaves a trail of destruction in his wake, including two ex-wives and children scattered across the city. Meanwhile, ex-wife Pen eventually finds herself a new, more suitable husband and after moving to the south of France, spends her days gentrifying her new home and garden, but somehow struggles to feel completely at home in the new marriage.

Following her parents’ divorce, daughter Isobel – now a young adult – quickly finds herself suffocating in her mother’s home and company. Fearful she will get swallowed up in some strange, interdependent relationship with her Mum, she leaps at the opportunity of work in the oppressive heat of Dubai. Within a short time of working there, she is swept off her feet by a handsome, dependable banker, who she marries and has twin boys with.

Her brother Conrad uses his monthly allowance to pay for his grotty shared East London flat. Conrad’s days are filled with trying to find a suitable love in his life. He is most at home tending to his modified bike, for which he feels enthusiastic and comfortable, but romance constantly evades him as he ‘overthinks’ everything to do with the opposite sex. He often wonders where his life is heading.

Against this backdrop of family separation, Pen finally decides now is the right time to sell the Highbury house, which has been sat empty for some while. We follow the separate lives of the Manvilles as they struggle to come to terms with saying farewell to their previous home.

I found myself drawn (and on occasion repelled!) to the rich characters inhabiting the tale. I didn’t really have a favourite, because I enjoyed each of them individually in their own right. However, I found Jerry as frustrating and impossible as his ex-wives probably did, yet his wonderfully erratic, irresponsible and at times hilarious behaviour drove the plot along and made it wholly believable.

Walker writes with a keen eye for detail and really gets under the skin of each character, making him a natural scene setter. His narrative cannily reveals how we can unconsciously live our lives as society expects, oblivious of real values and the people in our lives that matter. Completion is a deliciously funny novel which I found thoroughly engaging and I would highly recommend it.