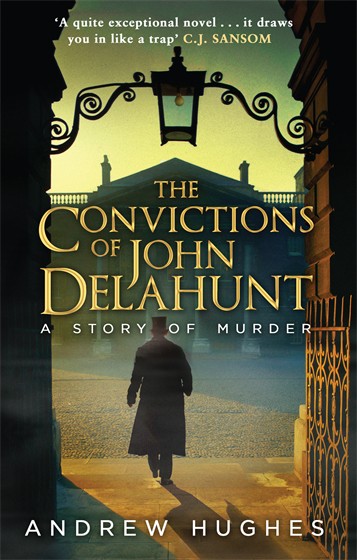 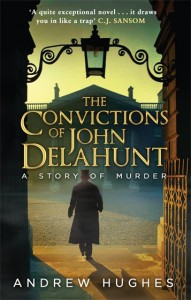 Kind deeds rarely leave a lasting mark in this chillingly haunting tale of a man awaiting his execution in Victorian-era Dublin. Following the murder of a young boy, John Delahunt is arrested, convicted and sentenced to hang, and in the months between his conviction and his execution, Delahunt writes his final statement and reveals every harrowing detail of what brought him to this position.

For all intents and purposes, this novel truly is, as its subtitle denotes, a story of murder. Beginning in the squalid gaol cell of Kilmainham jail and taking us back through the crime-ridden streets of a city gripped by poverty and political unrest, The Convictions of John Delahunt embarks on a mission to provide an in-depth look at the mind of a serial killer and a man driven to a life in Dublin’s underground spy network in a measure to survive. Delahunt’s sense of morality is practically non-existent: he is willing to provide false statements, implicate innocents in crimes they didn’t commit and sell secrets as an easy way of making money, but even worse are his sociopathic tendencies, especially when he sees that murder and other violent crimes are where the real money is.

Andrew Hughes does a spectacular job of building up a realistic picture of the dark, dank and dirty world that Delahunt lives in, but the development of Delahunt’s character is the shining star in this gem of a novel. He is an unreliable narrator and his actions are deplorable at times, but you can track his mental process and almost understand his motives. Creating empathy for a murderer can be no easy task. Through his line of work, Delahunt is exposed to more of the darker aspects of the city than ever before, to the point where he sees that he can literally get away with murder.

This novel was nothing like I was expecting, even if the subtitle should really have given the game away. The synopsis of the novel centres the action on the murder of a young boy who’s been enticed away from his mother, yet in the story of the text this event feels like a blip compared to everything else Delahunt experiences. The positioning of the event was also very clever – as this is the one event we know for certain will happen; throughout the novel Hughes develops a situation where even as Delahunt’s actions begin to delve into the world of the sociopathic we’re still clinging on until we can reach the event that will ultimately define him. Even as we reached the moment, I couldn’t quite believe it was actually happening and I was gripped to the whole sequence of events as I read ahead to see how everything was going to play out.

Yes, there is a certain element of ‘he got what was coming to him’ when you consider Delahunt’s fate, but equally you could argue that he was a victim of circumstance, and in that situation, you have to question who is really to blame. The narrative of the novel, told in flashbacks by Delahunt from his cell and interspersed with moments of present-day reflection and events, merely adds to the atmospheric tone. We could see elements of Delahunt’s character development, even kindness, in the scenes of him awaiting his execution that we lacked throughout his statement and his journey through college, elopement and marriage-in-squalor with a disgraced debutante.

As an afterword, Hughes reveals that the story of John Delahunt being convicted and hanged for the murder of Thomas Maguire was a true one, meaning that his fictionalised account serves to highlight this world of depravity in a sinister tale that you can’t help but be gripped by. This is a disturbing novel that has been well-crafted, and although at times I hated the narrator, I was compelled to keep reading, which should speak volumes about the overall strength of the novel.

The Republic of Imagination: A Case for Fiction – Azar Nafisi Review