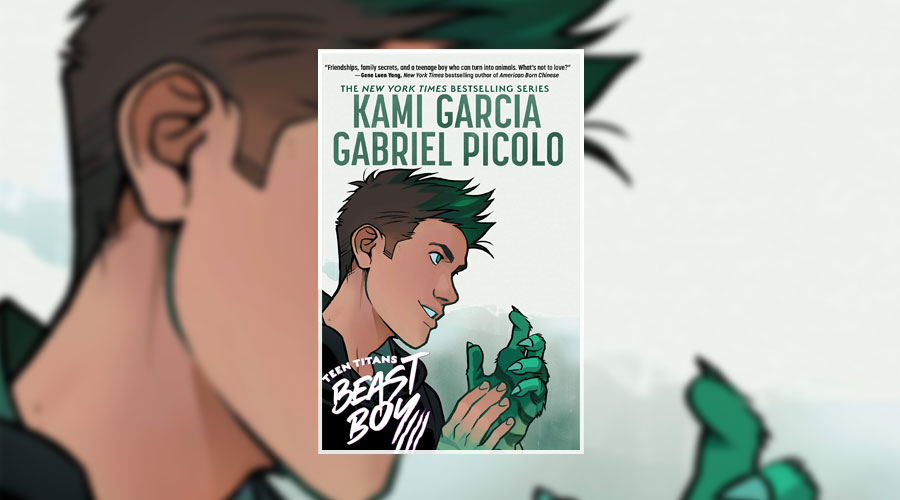 Beast Boy, the second title in the DC Graphic Novels For Young Adults series from writer Kami Garcia and artist Gabriel Picolo, reintroduces the wise-cracking, fun loving Garfield ‘Gar’ Logan in a modern day setting. This is an origin story, of sorts, though it’s perhaps better described as a coming-of-power story.

Like Raven before it, Garcia and Picolo offer up a fresh take on the classic teen hero, awakening Beast Boy’s powers within a present day high school setting with all the social difficulties that come with that. For Gar that means trying to improve his social status, knowing many of his peers don’t think much of him, and sharing the trials and tribulations of his two best friends, Stella and Tank.

Piccolo’s art style is a beautiful dream, focusing on brighter colours for the core characters and focus points, and allowing a more washed out background that looks great but doesn’t overpower the action. The purples and shadows of Raven are replaced here with shades of green and bright spaces. There is a warmth to the colour choices which compliment Gar’s inviting, energetic personality.

Narratively, Garcia does a fantastic job of weaving the core story of Gar trying to make the most of his senior year – he has a list of things he wants to achieve, from kissing the popular girl to bulking up – and exploring his emerging powers. It’s a quick moving graphic novel with plenty of action moments, though these aren’t superhero fights, rather they’re set around schoolyard stunts, arguments and animal attacks. It’s YA, so you can expect the biggest drama to come from all the emotions of youth.

Speaking to a modern generation, it has a diverse range of skin tones and races for the its characters – in the story and the background, as in life. It also tackles important topics to today’s teens. Beast Boy narrows in on veganism and animal cruelty, with Stella working at an animal shelter, and Gar being a vegan (as per usual). Stella becomes concerned about some of the dogs being put down because they can’t find homes, a tragic truth of animal shelters, while Gar also investigates possible animal testing in his town. These are all things that many young people care about today, and are true to Gar’s character, so it serves the story well to delve into them. Who better to advocate for better animal treatment than someone who knows what it’s like to be them?

Similarly, the story touches on social media and how it plays into popularity at school. Pranks increase the notoriety of certain students, which Gar notices. He tries to follow suit in the hopes of getting into the popular inner circle, though he does this with an awareness that his place and acceptance would be temporary and based on a falsehood. It’s refreshing to see a take on high school popularity that doesn’t so much demonise the popular people or those that strive to join them, while being aware that it’s not the ultimate victory it can seem as a teen.

Throughout Beast Boy, Gar’s friendship with Stella and Tank feels so natural, grounding the story. In a way both reflect who Beast Boy is/will be. In Stella, we see the urgency for justice, particularly around animals, and a willingness to take action. Through Tank, we get his steadfast commitment to his friends. They also give us a little of the camaraderie that we’ve come to expect from Beast Boy as a Titan, even as he unleashes his new power of transformation and ultimately heads out to find out more about it.

Beast Boy is an exciting, fun and timely read. It’s a great YA graphic novel and a bright follow-up to Raven that will get you excited to see what comes next when two of the foundational Titans meet at last.