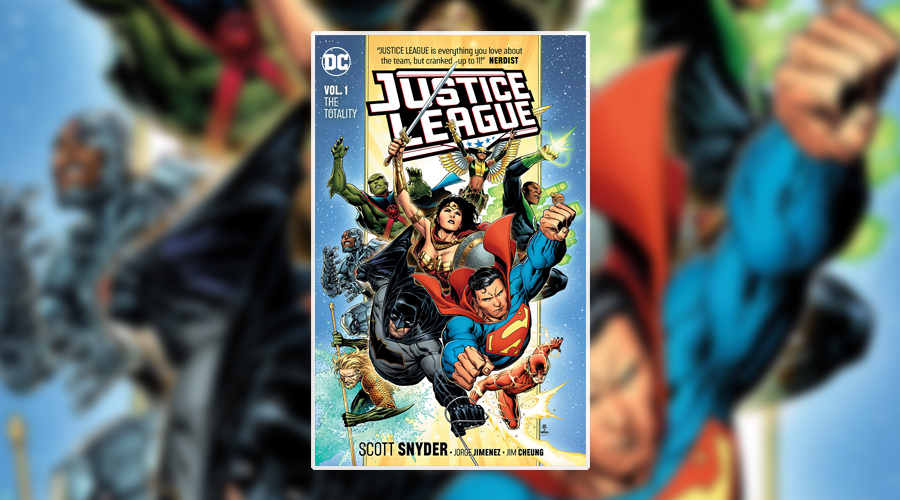 Spinning out of the events of Dark Nights: Metal and No Justice, The Totality is the first volume of a new Justice League title, finding the familiar heroes confused and outmatched by the arrival of a new power on Earth, the eponymous Totality.

The roster for the team should be fairly recognisable for anyone that watched the classic Justice League cartoon of the 00s, featuring Batman, Superman, Wonder Woman, Green Lantern (John Steward), The Flash, Martian Manhunter, Hawkgirl, Aquaman and Cyborg. They find themselves pitted against a new Legion of Doom, led by (evil again) Lex Luthor and featuring the archenemies of each member of the Justice League, who wish to use this power for their own means.

The story weaved through these seven issues is a bit complex and requires some foreknowledge of the previous few big DC events (at least), meaning it isn’t a great starting point for new readers. It’s possible you could begin here, but anyone unfamiliar with DC of the last few years is likely to get confused the second they start talking about the source wall. It’s a shame as it’s quite a fun story, featuring some very out there moments such as Lex Luthor and Batman battling inside Superman’s body. However, it’s hard to recommend it to anyone wanting to get into Justice League, which is surely the point of a new issue #1.

As to be expected of a team featuring nine members, many of them draw the short straw, with characters such as Wonder Woman and Aquaman getting little to do. John Stewart is quite effectively brought back into the fold here, which is welcome as he is the only Green Lantern I knew from childhood, getting a nice arc about overcoming his guilt and not succumbing to his dark side. The story actually works best as a way to explore characters people may not know so well, giving a bit of spotlight to Martian Manhunter and Hawkgirl as well, two characters who have been fairly absent until recent events.

Jorge Jimenez handles the majority of the art for the story, treading a fine line between cartoon-esque art and something more realistic, which works well. All of the characters look exceptional, and there seems to be no challenge too great for the artist – bringing to life sprawling action scenes, an army of lanterns, antibody monsters, and the beauty of the inside of The Totality.

It’s hard to know where to place this book. The story isn’t necessarily bad but it does feel very weighty and at times a bit rushed, as if Scott Snyder was trying to squeeze too much into seven issues. The final issue works overtime to wrap up the various threads, fighting off Luthor and an army of new Lanterns from Earth, whilst dropping some clues about what’s to come.

The best sequence of the entire book is in the first few pages as the team mock ‘the Batman voice’, showing a level of fun that the rest of the comic just doesn’t live up to. Maybe if the next story arc can find the fun a little more, it could make for an interesting team book, but for now it just feels way too rooted in the larger DC events happening around it.

Justice League: The Totality is published by DC Comics on 27 November 2018