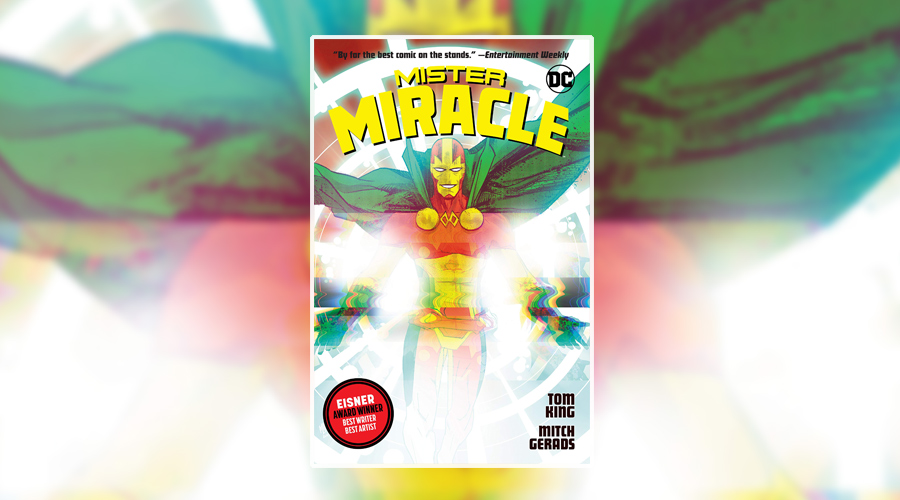 Mister Miracle is the son of a god, raised by Darkseid as part of a peace treaty to put a stop to interplanetary war. A man whose power is the ability to escape anything, he fled to Earth, fell in love with and married Darkseid-lackey-turned-hero Big Barda. As written by Tom King, Scott Free is a man in turmoil, trying to balance his life on Earth with his place in a massive conflict.

Right from the start you can tell Mister Miracle will be a different sort of comic book, one that plays with what the genre can do whilst also asking some key questions about life. The first issue starts with the origin of Mister Miracle (a character I was admittedly unfamiliar with), counterbalanced with a suicide attempt that sees him question what is real. It’s no great surprise to me that the writer of Heroes in Crisis, which is also discussing mental health and superheroes, is able to handle the topic so easily here. We’re presented with the idea that our hero Scott Free may have no grip on reality, and the question of whether that makes him any less heroic keeps arising.

The comic does a great job playing off superhero elements with normal life, effortlessly showcasing brutal battles against scenes of a husband and wife discussing home decor. For Scott Free and Big Barda, super-heroics is their life and their marriage feels one of the most genuine superhero relationships I can remember reading. It has its sweet moments, but is all together just real and at times about as mundane as a relationship can be.

Mitch Gerads’ artwork is fantastic throughout, using a photorealistic style that still feels at home in a comic book. His action scenes are phenomenal and expressive. One of my favourite issues of the 12 part series sees Scott and Barda trying to break into an enemy stronghold, getting through complex traps, with each panel looking dynamic and crazy. The way Gerads creates the distortions suggesting something is wrong with Scott’s mind are also great; like static on a TV screen seeping through the panels.

One of the true strengths of Mister Miracle is its ability to explore a plot about trying to defeat Darkseid and still make you care more about the human element of the story. Even during the craziest of action scenes, character is the focus.

Tom King has been cementing himself as one of my favourite writers over the last few years – first with his exceptional Batman run and now what is steadily becoming one of my favourite events in Heroes in Crisis, both of which push what a superhero comic can be. Mister Miracle is a book I managed to completely miss on first release and I wish I’d discovered it sooner. I can’t wait to read it again and discover anything I might have missed. It’s the kind of book I’ll find myself reading time and time again.

Mister Miracle was published by DC Comics on 19 February 2019

DC Heroes Vs Villains: Batman, The Joker and More