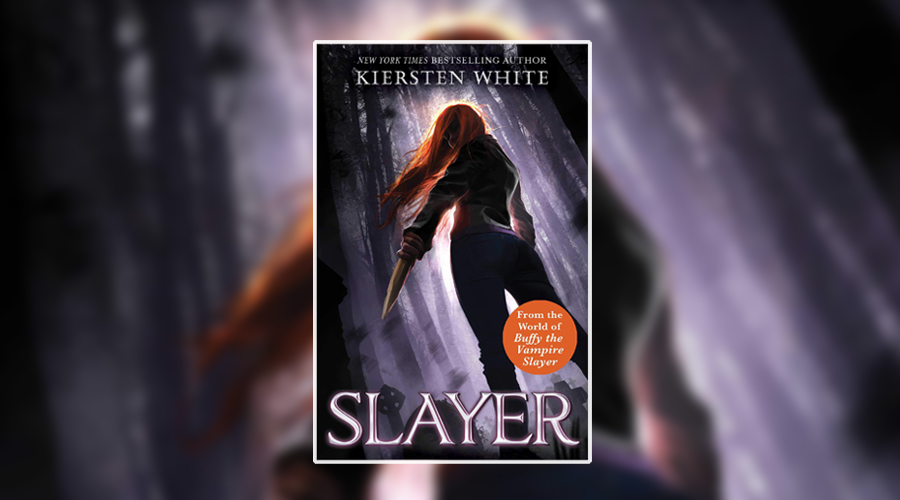 In the acknowledgements for her latest book, Slayer, New York Times bestselling author Kiersten White apologises to “every other writer who died when they found out there was going to be a Buffy spin-off series”, because she was – to coin a Buffyverse phrase – the ‘chosen one’. It was inevitable that every writer who grew up watching Buffy fighting supernatural beasties and wishing they could be a part of the Scooby Gang would be insanely jealous of White. But when you read Slayer, it’s difficult to imagine the spin-off being in better hands.

Set a couple of months after Buffy destroyed the Seed of Wonder in the comic book series, Slayer presents readers with a world free from magic. For fans of the cult show not familiar with the comic continuation, the storyline involving Buffy smashing the source of all magic on Earth was a catastrophic event – causing chaos for both Slayers and Watchers, and introducing a new breed of evil known as zompires. It’s this fallout that White explores through the eyes of Nina, one of a small number of Watchers-in-training who discovers she’s not only a Slayer, but is the last ever Slayer.

Nina grew up at the Watchers Academy, which trains teenagers as guides to Slayers, but she’s a medic, not a fighter. She’s never embraced the violent lifestyle that her twin sister Artemis relishes, so her first response to finding out that she’s the newest chosen one is to deny her destiny; she couldn’t possibly protect Earth from vampires, demons and other supernatural forces of darkness. But when vicious hellhounds threaten her sanctuary and bodies start turning up, Nina’s newfound powers compel her to join the fight.

Moving the action from Sunnydale to Ireland, White throws readers head-first into a world of trainee Watchers with nobody to watch. The Slayers have turned their backs on their guides and the blame falls solely on Buffy’s shoulders. “Buffy sees, Buffy destroys”, says Nina in the opening chapter as she discusses the loss of magic and the Watchers’ collective distaste for Buffy with her fellow trainees. This hate-filled chatter surrounding the original heroine feels like sacrilege but the more Nina struggles with her own destiny, the more she begins to understand the responsibility and difficult life-or-death choices Buffy had thrust upon her.

“I refuse to believe that I have to choose death to save people. If I can be a hunter and a healer, a Watcher and a Slayer, it proves that life isn’t binary. There’s always another way out there, and no matter what, I’m going to find it.”

Unlike its predecessor, which dealt with some pretty dark, adult themes, Slayer veers more towards the middle grade end of the young adult spectrum. It’s also a book that requires a healthy knowledge of the Buffyverse – if not the comics, then certainly the TV series, which lays out the Slayer/Watcher history that’s so crucial to this particular plot. Similar in style to The Mortal Instruments, it’s a fun and witty urban fantasy tale that’s also satisfyingly nostalgic, with plenty of nods to original characters (Faith, Kennedy, Giles, to name but a few) and storylines.

At its heart, Buffy the Vampire Slayer has always been about more than just monsters. It’s about friendship, love and family, and navigating those things whilst trying to grow up and make the right choices. White understands that, instilling her story with sincere characters and complicated family dynamics. Whether it’s the shifting bond between Nina and her sister as their roles change, or Nina’s prickly relationship with her standoffish mother, Slayer never loses sight of the human element amidst the supernatural.

White also nails the quirky, culturally relevant tone of the original series, ensuring this is a book that feels like it belongs in the Buffy canon, whilst being unique enough to stand on its own. Comparisons to Joss Whedon’s creation are unavoidable and whilst it’s impossible to match the original show’s iconic brilliance, Slayer is an entertaining adventure that takes the Buffyverse in a new direction.

If the hint of romance between Nina and her Watcher Leo doesn’t make you excited for the continuation of this series, then the end twist will definitely compel you to pick up the sequel when it’s published.