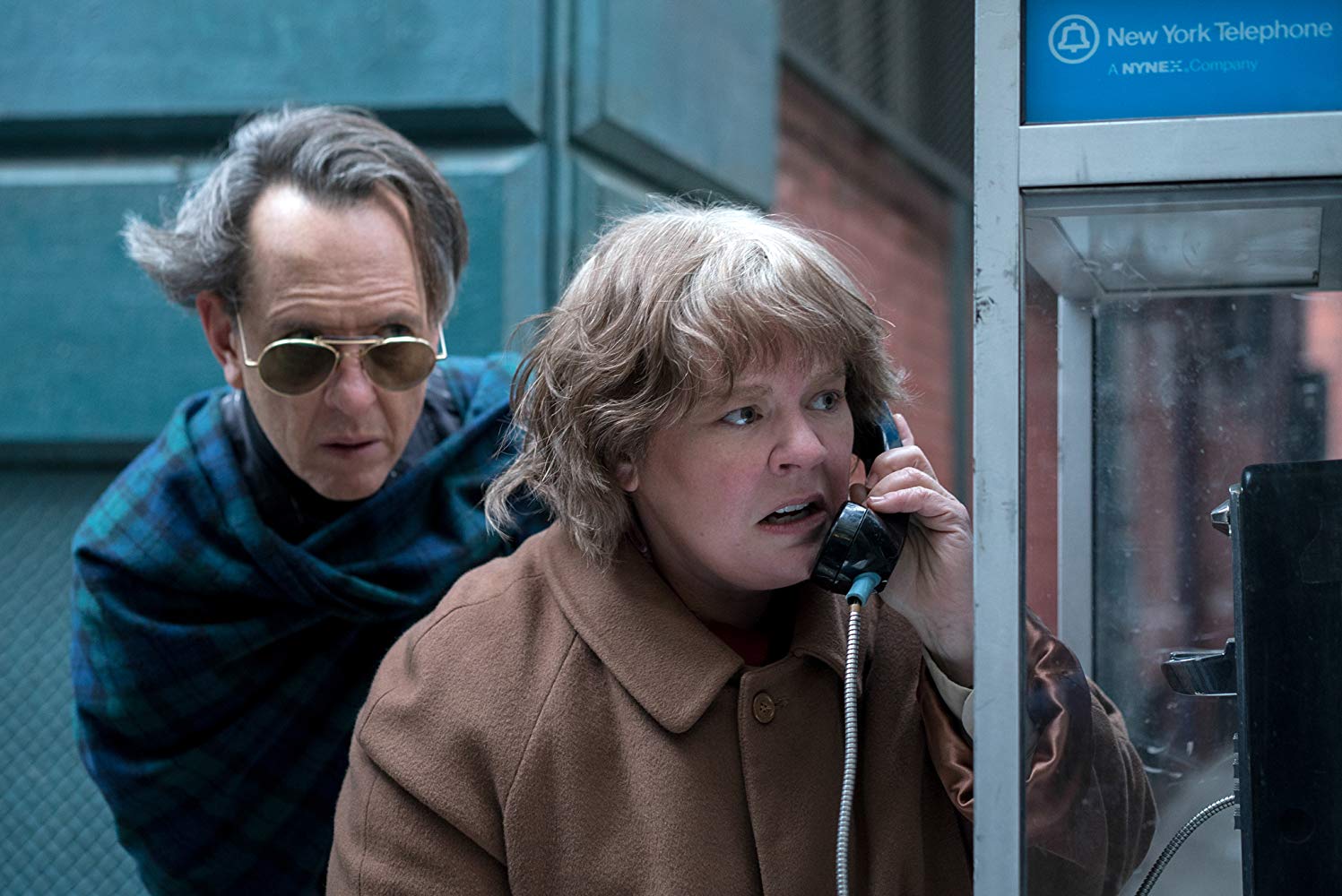 Many movies have cinematically shaped and distilled New York’s image. Manhattan. You’ve Got Mail. Anything by Martin Scorsese. There is something about the city that entices filmmakers. In Can You Ever Forgive Me? director Marielle Heller and writers Nicole Holofcener and Jeff Whitty provide an evocative portrait of a New York many choose to ignore: that the Big Apple is a contradiction – it’s grand and grimy.

An adaptation of writer Lee Israel’s memoir, Heller’s camera follows Lee (Melissa McCarthy) around an early-90s New York as she makes a killing (relative) forging letters of famous people including Noel Coward and Dorothy Parker. Unlike most films about writers, where everyone lives in apartments they shouldn’t be able to afford, the infamous rent control policy means Lee lives in a shabby apartment in an Upper West Side high-rise. A product of both worlds, Lee is able to move between the high-class literary world and the dive bars, often occupied by her new loquacious friend, Jack Hock (Richard E. Grant).

McCarthy plays Lee with a tender touch, never shying away from the fact she’s an entitled monster angry at her rejection and never judging her cruel behaviour. In an early scene, Lee attends her agent’s house party, one with an attended cloakroom, and thumbs her nose up at the pretentiousness of her fellow literary guests. She shouts that writers should be invisible behind their subjects and shouldn’t be celebrities like fellow party guest Tom Clancy. But McCarthy understands this is bravado, and with a slight wobble of her chin, she reveals more about Lee than all her barbed witticisms ever could – she’s vulnerable and wants to be loved. 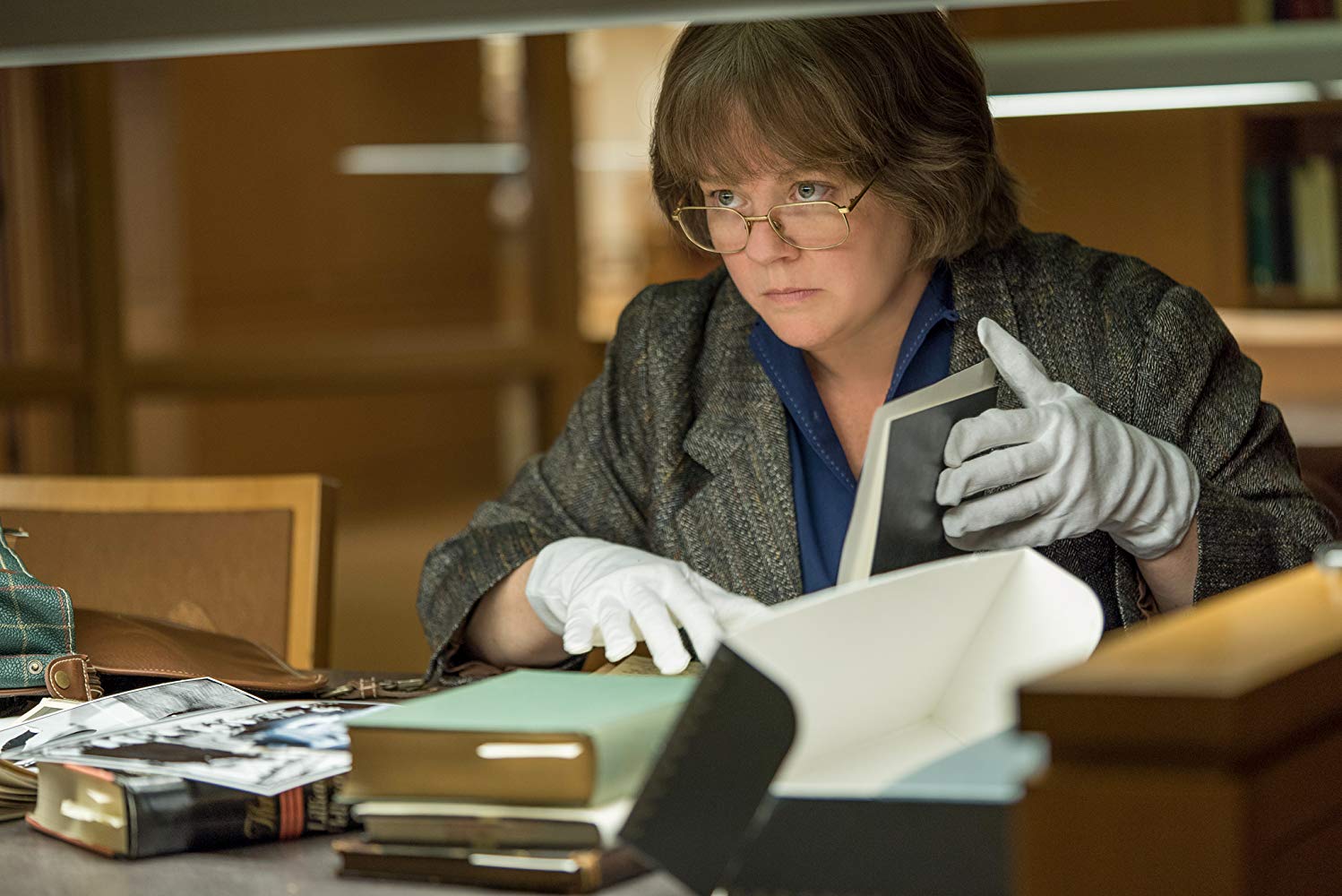 So is it better to be mediocre and famous or great and unknown? Is forgery an acceptable crime if it sells? The independent bookshops eagerly accept Lee’s work without authenticating, and continue to sell them once they’ve been outed as fake. Through Lee’s eyes, the literary establishment drove her to this point and they will sacrifice their morals if it means making a quick buck.

Helping Lee in her scheme is Grant’s Jack. The filmmakers exaggerate Jack’s eager support, positioning the film as an odd-couple comedy. Grant and McCarthy have genuine, salty chemistry and their scenes together make the movie. Jack, a heavy drinking bohemian homosexual, helps Lee because he’s lonely. In Grant’s hands, Jack is a co-dependent loser with a sense of humour, and he and McCarthy make Lee and Jack a couple to root for.

The pair committed fraud. The pair are bitter and cruel. During the film’s runtime, the pair become loved. Heller firmly places her story from their perspective and this means there’s no judgement, no third act moral switch. They are flawed, unsympathetic characters. Heller and McCarthy have love and understanding for Lee, and this is what makes you forgive her.

Can You Ever Forgive Me is available on Digital Download, DVD and VOD now.