Netflix’s What/If is a soapy drama from the creators of Revenge and it has the same captivation: it’s an interesting premise but not entirely able to keep the right momentum. It’s certainly watchable and feels indulgent when it really plays into the overly dramatic, and though it lags in the middle episodes 3-5, the back half is engaging enough to take you to the finale. Prepare yourself for a wild ride with micro-expressions of smugness, lots of storms, 80s themed proms in the early 2000s, murder and people. Writing. Things. Down.

Pitched as a neo-noir, whatever that really is, it aims to examine the nature of good and evil, revenge and alienation, all with a criminal backdrop. It’s supposed to be an anthology series looking at moral quandaries, which one can only assume will end up tied to each of the seven deadly sins or something similar.

The pilot puts the core premise in place, with ruthless business mogul Anne Montgomery (Renee Zellweger) offering to save young Lisa Ruiz-Donovan’s (Jane Levy) biotech startup, by funding it, in exchange for one night with her husband, which the couple can never discuss. If they do, the full ownership of the company goes to Montgomery. Since there would be no story without this, the couple end up accepting the offer and the series deals with the consequences and fallout. Oooh, I hear you say, tell me more. Hold those ooohs please, it’s at most an oh.

The primary storyline revolves around Anne revealing her endgame – a word we’re apparently going to have to get used to hearing post Avengers – which has numerous steps, including double crosses and hidden agendas. The last second reveals remind me of Gossip Girl and the meddling of Blair Waldorf, though in this universe there’s a distinct lack of showy glamour, rather an intrinsic elegance to the world. It’s opulent and ridiculous, but to those who live in the 1%, it’s truly their bare minimum to have lavish apartments and ceremonious events every other day. There’s a lot of white and grey, silk and stone; those are the textures the show is playing in. 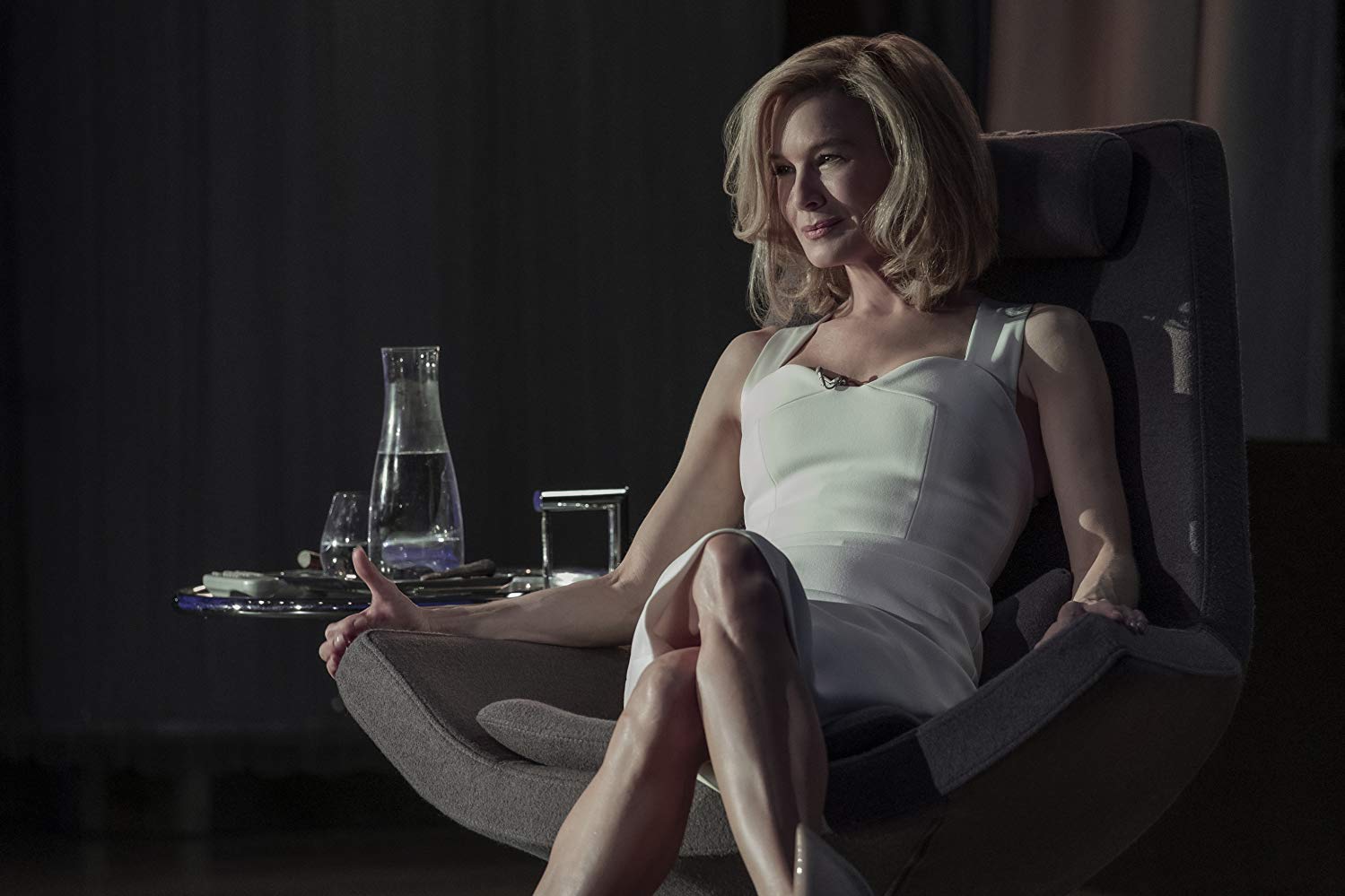 Zellweger is no Bridget Jones, the role she is arguably the most well known for, and this turn feels similar to Calista Flockhart’s Cat Grant in Supergirl. She’s no longer the endearing, smart, young woman, but a confident powerhouse with the strength of experience and self belief. Yet Flockhart’s Cat felt earned and real, while Anne is clearly a costume, a character. Zellweger is clearly bathing in Anne Montgomery, every syllable of it. She glides, nay floats from moment to moment, waiting to be informed by her right-hand man, Foster (Louis Herthum), who is the only person who directly looks at people, leaving us to assume Anne has excellent peripheral vision.

If you want a sense of how ridiculous, and I use that word in a non-derogatory way, this show is, in the pilot episode Anne is recording herself while staring out the window at a thunderstorm with lightning reflected in her eyes. She then writes down the title of her book and UNDERLINES IT. She means business. The next day, she does archery in her entrance-way (hallway?) over breakfast while plotting. Yes, that is the level we’re dealing with in What/If.

Against the cool visage of Anne, we have Lisa. She runs Emigen Molecular Sequencing, her startup, with Cassidy Barnett (Daniella Pineda) and has built a wholesome life with her husband Sean (Blake Jenner). Her life seems on track, though she has a tragic past with both her parents dying simultaneously. Cassidy is the hard edge to her soft touch and Pineda makes her tough yet likeable, but we don’t spend enough time with the character to really know her.

Jenner’s Sean gets much more screen time and, honestly, it’s not that interesting. He’s introduced glutes first as he emerges naked from bed. His purpose is clear. He’s a good person, cue Rachel Bloom’s Crazy Ex Girlfriend song, and wants to be a firefighter – a point that on reflection seems oddly specific seeing as how Lisa’s parents died in a fire. Ultimately, he’s a pawn in Anne’s game with Lisa, yet we spend more time with him than other more interesting characters. 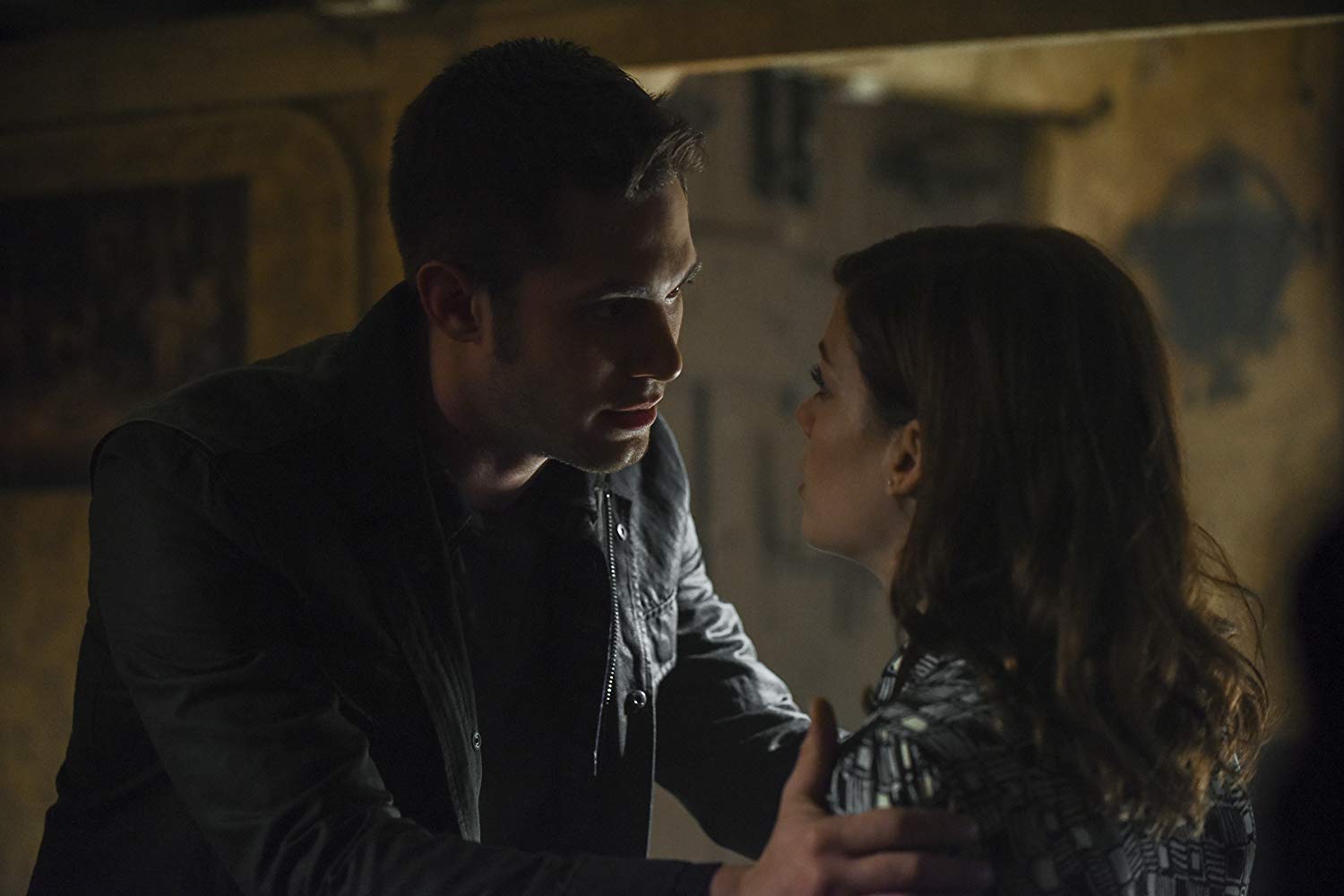 One of those more interesting characters is Marcos Ruiz (Juan Castano), Lisa’s brother. His C storyline with boyfriend Lionel (John Clarence Stewart) starts with the contemplation of an open relationship; though it appears it might not be the first discussion. Apart from Marcos thinking his six-pack abs means he has a “dad-bod”, he’s a lovable do-gooder and has possibly the best boyfriend in the world who is also very handsome. Cute same-sex couple, tick.

Then there’s the Todd and Angela side story. Angela Archer (Samantha Marie Ware) is a surgical resident and Todd (Keith Powers) is her husband and best friend of Sean. They’re both EMTs and want to be firefighters. In the early episodes Angela is sidelined from the main characters, appearing only briefly and never really getting an established place in the group. What should be a core-four with Lisa, Sean, Todd and Angela, feels more like Lisa, Sean and Todd, and then Angela somewhere off to the side. Angela is having an affair with her Chief of Surgery for an unfathomable reason, and becomes pregnant but doesn’t know who by. Dr Ian Evans (Dave Annable) is immediately creepy. Like, the moment you see them together you think: that isn’t right, quickly followed by DANGER! RUN AWAY!

Most of the story between Angela, Todd and Ian plays out completely separate to the rest of the story and has no link back to the main plot, so it feels superfluous. As What/If is an anthology series, it feels like this plotline is being introduced as some kind of backdoor to a season focused on them. Without it tying back into the main plot, or at least intersecting in a meaningful way, it all feels a bit tacked on. Which is a shame as it could have been a passable thriller.

Look, this was never looking to be the greatest show on streaming. It’s a takeaway and rosé sort of show. There’s a titillation of sex, mostly between Lisa and Sean, and it’s in slow motion to really capture the lack of passion, and it definitely has some amusing “because, of course they did!” moments. Ultimately, What/If is another YOU playing with the idea of one’s moral compass, focusing on people with painful pasts, abuse and how they turn that into kindness or, more often in this show, power over others. It has some fun styling and hopes to be the topic of much Twitter chatter. It might think it has a message or deeper meaning, but if it does its not clear, nor do we really care. It’s a suitably watchable show though, if you’ve watched everything else.