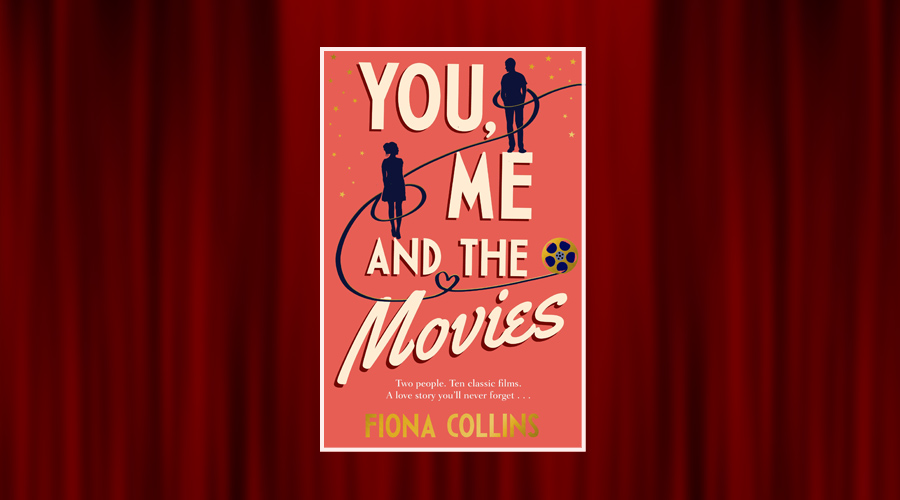 Fiona Collins’ You, Me and the Movies is not your average romantic comedy book. It feels like a classic rom-com, weaving together old Hollywood magic with contemporary Richard Curtis-esque drama. Yet it has a unique, emotional heart all of its own, telling the story of a woman in her forties struggling between a stagnant present, an uncertain future and the comforting nostalgia of the past.

Arden Hall is in a rut. She’s escaped an abusive marriage and come out the other side stronger but she’s stopped moving forward. She’s bored with her job, shuns her friends when they try to get her to socialise and she can’t remember the fun, carefree version of herself before she became so downtrodden. It’s whilst reluctantly visiting an old university friend in hospital that Arden is confronted with a blast from the past; a face she never forgot and never expected to see again. That face is Mac, the handsome, charismatic film lecturer who Arden had an affair with when she was a student.

Moving between Now and Then, we revisit Arden’s bittersweet memories of her blissful, clandestine relationship with Mac. In the past, Arden is running from her home life and a selfish, narcissistic mother who models herself on Marilyn Monroe. Young Arden is high-spirited, confident and audacious bordering on bolshie. She needs validation, someone to make her feel special, and she’s drawn to Mac like a magnet. When he reciprocates Arden’s shameless flirtations, they fall into a passionate affair that consumes them both. Arden doesn’t care that he’s married. All she wants is Mac. All of him, forever. Of course, it doesn’t quite work out that way.

In the present, Arden keeps visiting Mac in hospital. He’s been badly injured in an accident and can barely talk. The only words he can manage are brief references to the classic films he and Arden watched together all those years ago. From Fatal Attraction and Casablanca to The Graduate and Pretty Woman, Mac’s references to movies reignites a spark in Arden she thought she’d lost; not just for Mac himself but for the young woman she used to be. She might not know this frail and broken version of Mac, but as she remembers the ten classic films they shared together, she’s reminded of their brighter, more alive selves.

“I never thought I’d see him again. The man I loved all those years ago. The man who inspired me, dazzled me, adored and betrayed me. But on a damp and darkening afternoon at the end of December – when I think nothing surprising or dramatic will ever happen to me again, thank God – there he is.”

You, Me and the Movies is an unexpectedly emotional story about love and friendship – both new and old, lost and found. It’s first and foremost a love story, carrying with it all the deep, romantic, heart-shattering feelings that come with an instant attraction which blossoms into something more but is destined not to last. Whether you warm to Mac or not depends on your affinity for men who happily cheat on their wives and don’t seem to have any remorse about doing so. Arden, however, is an easy character to like – even when she’s uncaringly chasing after a married man – because she’s so clearly damaged by her mother’s own casual affairs.

The novel is peppered with dry, typically British humour that wouldn’t be out of place in Notting Hill and Love Actually. There’s that same sense of bittersweet tragedy and heartbreak. We know Arden and Mac’s relationship doesn’t have a happy ending or they’d still be together, and it lends the story a feeling of pathos often featured in both classic cinema and rom-coms.

Whilst this is primarily a love story between two people, there’s much more to the tale than just Arden and Mac’s all-consuming, forbidden romance. This is a story about a woman learning to love and accept herself after she’s been worn down – by men, by her self-centred mother, by the world in general. It’s a tale of absent parents, of women being the heroes of their own stories, and life imitating art. Tender, witty and uplifting, Fiona Collins has written a love letter to movies and the way they make us feel. It is, rather appropriately, the kind of story that was made for the big screen.

You, Me and the Movies was published by Corgi on 26th December 2019

Fiona Collins on the nostalgia of classic movies