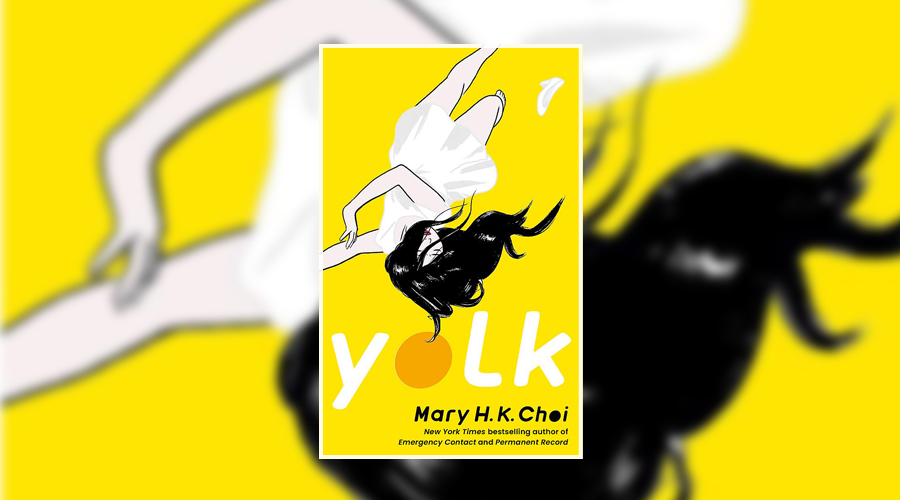 Twenty year-old Korean-American Jayne is just about holding it together. She lives in a tiny, grotty illegal sublet in Brooklyn, with a man who’s only paid rent once in the months he’s stayed there. She’s always missing her college classes. She has issues with food. She doesn’t talk to her mum or her older sister June – that is until one day, her sister hunts her down. She has cancer. She needs her help. And so Jayne’s life becomes even more complicated…

Yolk is bestselling YA author Mary H K Choi’s first novel for adults. There’s such a lot tackled within its pages – explorations of hyphenated identities, family ties, the difficulties of making a home for yourself in New York City, eating disorders, America’s terrifying healthcare system – that to begin with, it can all seem a little messy. The more you read however, the more it becomes clear that that’s just an honest depiction of life. Life is messy. And Choi illustrates this fact with such detail, warmth, perceptiveness and humour, it makes her book feel like a living, breathing thing.

The heart of the novel is the relationship between Jayne and June. At the beginning, they are like strangers. It doesn’t take long to discover that that’s because they’ve both built a defensive wall around their many issues and secrets, and each is scared to let the other sister in. Though they are both only in their early twenties, there’s already a whole lifetime’s worth of jealousies and resentments between the two. Much of Yolk revolves around them getting to know one another again, and slowly learning how to communicate. As the book progresses, they start to form a healthy co-dependency; whilst it’s June that has the cancer, Jayne comes to need her sister as much as her sister needs her. Seeing them rediscover their once close friendship – amidst a fusillade of banter and familial in-jokes – is a special thing.

As is Jayne’s slow journey towards healing. As a protagonist, she can be hard to warm up to. For a long while it appears as if she is only capable of making bad decisions, and is always quick to leap to self-defensiveness and selfishness when anyone dares challenge her. Even more frustrating is how she won’t stand up to people who actually do deserve it, like her sponging roommate Jeremy. Still, she’s young. She’s been through a lot. Choi shows us the overwhelming insecurity behind her unwise actions, and frustration at her decision-making soon turns into an eagerness to see her sort herself out. After we’ve witnessed Jayne reach her lowest ebb from such an intimate vantage point, the gratification of watching her take her first few steps in the right direction is immense.

An absorbing coming-of-age story told with great empathy and unvarnished honesty, Yolk is one of those precious books that makes you feel bereft as soon as you turn that final page.