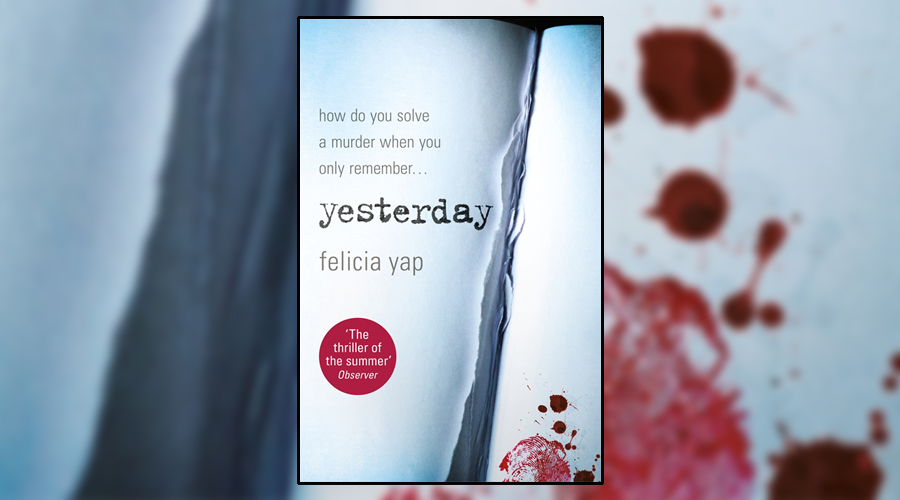 Unless you have been living under a rock, chances are that you have heard about Felicia Yap’s much-hyped debut. I was excited about this book because I knew the story was set in the dystopian world resembling Minority Report and centered around an unreliable narrator resembling that of Before I Go to Sleep. I was expecting an epic mash-up of sci-fi and psychological thriller but was sorely disappointed on both counts.

The high-concept premise is interesting enough. A woman’s body turns up in the River Cam and the police suspect foul play. But how do you catch the criminal in a world where people don’t have long-term memories? This dystopian world is the same as ours except that it’s divided into Monos, who can only recall yesterday, and Duos who can remember things for two days. People do retain basic facts about each other so their memory is not a completely blank slate but everyone maintains an iDiary, meticulously noting down every important detail of the day to remember day-to-day happenings.

The story is told from multiple points of view but the majority is narrated by Hans, the police officer investigating the murder. The only hope he has of tracing the woman’s killer is by perusing her iDiary, which leads him to Mark Henry Evans, successful author and aspiring politician. Also integral to the story is his wife, Claire Evans, who can only vaguely recall something bad happening two days ago involving his husband and a woman. Since the plot has a lot of twists, I will refrain from giving away any more about the story.

The main quibble I had was with the overwrought execution of the story, which had a lot of potential. In its attempt to outsmart the reader, the plot constantly somersaults and backflips only to land on its face in an utter mess. The first-person narratives are choppy and written in one-tone, which gives us little to no insight into the characters individuality. The plot twists gradually go from suspension of disbelief to completely implausible with the story reading like the first draft of a bad 80’s soap opera replete with evil stepmother and a clichéd vamp.

The dystopia that Yap has conjured is an intriguing one. There is an implicit bias against Monos due to their supposed inferiority when it comes to memory. They are generally considered incompetent and slow-witted. This social divide between Monos and Duos is an obvious parable to social discrimination and British class system. However, the book never really taps into it even though, in my opinion, the story would have benefitted from some depth.

Yap depicts how dependent the society is on their iDiary to have some coherent sense of their lives. The iDiary is a not so subtle jab at the ubiquity of Apple, and Steve Jobs also gets a cheeky mention. The problem is that all these larger themes are merely listed and never delved into at all so the reader never gets to see the point this story is trying to make.

This book features only two kinds of female characters – the goody two shoes who are submissive and have sworn unwavering loyalty to their men, or vindictive and scheming busty ladies with a predilection for plastic surgeries. One of my major pet peeves is the recent trend in psychological thrillers featuring so-called unlikeable woman protagonists. These characters are neither three dimensional nor relatable and only portray a lazy and toxic stereotype.

The dialogues are stilted and riddled with clichés. The story aims to incorporate a femme fatale, a murder mystery and a touching story of a marriage in its plot, which makes large parts of this book incongruous with each other. Felicia Yap was touted as one of the new literary stars but her debut fails to match up to its hype. Yesterday tries to cram way too much into a single book to the point that by the end it is a preposterous, incoherent mess.

Yesterday was published by Wildfire on 10 August 2017