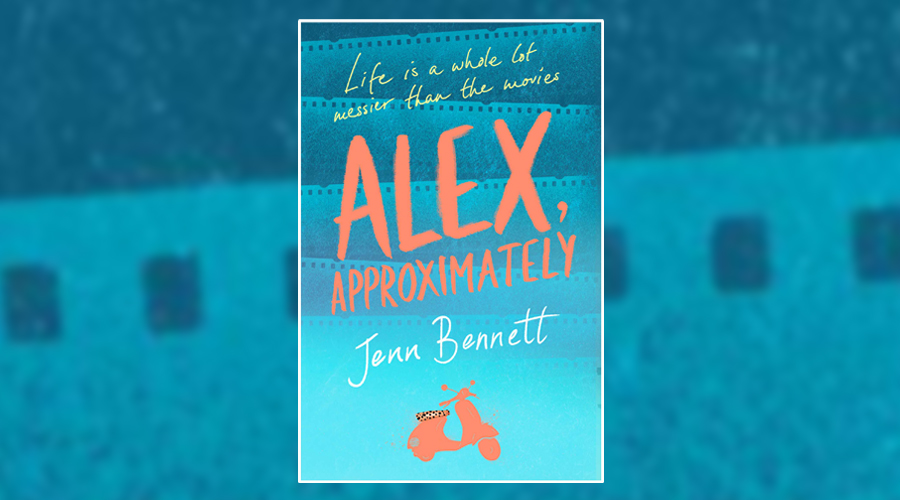 As far as young adult contemporary romances go, Alex, Approximately ticks pretty much all of the right boxes from the get-go; throw in the fact that author Jenn Bennett drew inspiration from the romantic classic film You’ve Got Mail too, and what we’re left with is a very cute and heartwarming novel that, while a little too formulaic, doesn’t actually go too far wrong.

When classic movie fan Bailey moves across the country to a small California surfing town to live with her dad (and, as it happens, her online crush and fellow film geek Alex), there’s a part of her that’s hoping for a Hollywood ending – boy meets girl, boy and girl instantly connect, boy and girl ride off into the Pacific Coast sunset. Only Bailey is a lot more cautious than that so she doesn’t actually tell Alex she’s moving to his hometown, despite his invitation to meet him at the annual film festival at the end of the summer. Instead, she decides to try and find him the old-fashioned way, with detective work, when she can fit it in around her new summer job at the local tourist-trap museum. If only that annoyingly attractive museum security guard Porter, who also happens to love classic cinema, wasn’t proving so much of a distraction…

So, yes, it’s not hard to see where Alex, Approximately is going and readers spend the majority of the novel waiting for Bailey and Porter to catch up and make the connection for themselves, which can prove to be frustrating. The internal war Bailey wages between her perfectly-crafted fantasy of a relationship with Alex and the messy, exhilarating reality of a relationship with Porter would hold a lot more weight, for example, if we didn’t know they were the same person.

In fact, the whole online, chat room friends meet-up hook falls by the wayside pretty quickly as the novel becomes less about Bailey finding Alex and more about Bailey and Porter’s slow-growing romance, with Alex becoming more of an afterthought, and something to be brought out as a complication when it suits. Still, when the online chat conversations do turn up, they’re the kind of typical communication comedy of errors you’d expect and it’s a shame we don’t see more of it through the novel.

“If we’re meant to be, and he’s the person I imagine him to be, then things will all work out fine. He’ll be wonderful, and by the end of the summer, we’ll be crazy in love, watching North by Northwest at the film festival on the beach, and I’ll have my hands all over him. Which is what I spend a lot of my free time imagining myself doing to his virtual body, the lucky boy.”

But apart from being completely oblivious, Bailey’s character is actually well-crafted and, crucially, relatable; you’ll be hard pressed to find any teenager who can’t see a bit of themselves in Bailey, from her tendency to overthink to her desire to completely avoid any kind of uncomfortable situation, choosing instead to keep her head low and avoid confrontation. Porter, too, is a well-established character, complete with fleshed-out backstory and a collection of charismatic supporting characters unique to him.

Bringing these characters together means readers are treated to an enjoyable and light-hearted romance – complete with teasing, flirting, awkward meet-ups and blushes on both sides – and, like the characters themselves, their relationship also has its flaws. From Porter’s overblown acts of machismo in Bailey’s ‘honour’ to Bailey’s unnecessary evasiveness causing friction, Bennett doesn’t shy away from making this teen relationship as true to life as possible, with plenty of mistakes being made, wires being crossed and self-doubt colouring each of their opinions and actions. Even when Bailey and Porter’s relationship starts moving a little bit too quickly it doesn’t feel unexpected or unrealistic and it’s discussed in a very sex positive way too, which is heartening to see in a teen-oriented book.

While there are a few aspects of this book that could have been handled with a bit less bias towards its leads – Porter’s childhood friend Davy exists purely as antagonist, when actually his story and situation could have been explored with a bit more nuance – in all, Alex, Approximately builds off the idea introduced in a classic and well-loved rom-com and turns it into an engaging YA novel. The picture-perfect California setting and Porter’s surfing subplot injects the book with a firm dose of summer-friendly escapism and the heavy influence of classic cinema gives everything a wonderfully nostalgic and, yes, romantic tint. Bennett expertly brings all of these elements together in a feel-good story with just the right amount of drama to off-set the cute factor, resulting in a charming read, an uplifting love story and a Hollywood ending worth staying up for.

Alex, Approximately was published by Simon & Schuster on 27 July 2017