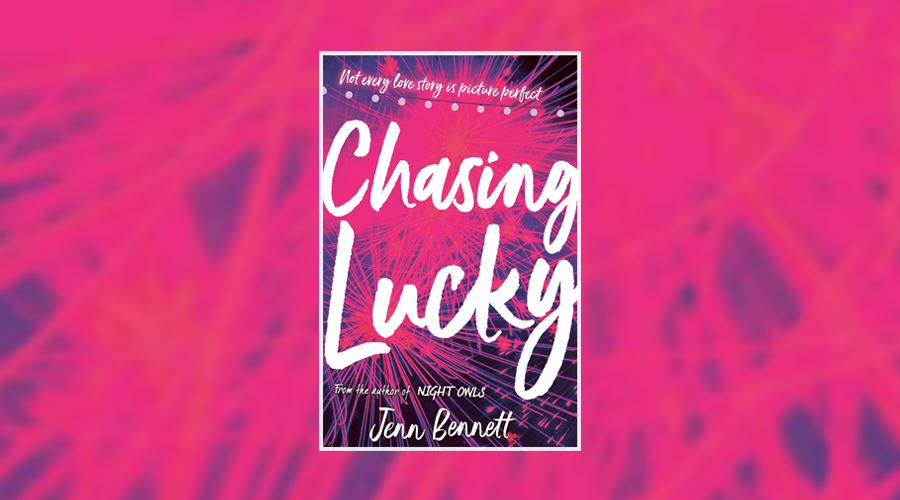 Josie Saint-Martin is used to moving around, never settling in one place long enough to put down roots or make friends. She’s spent half her life jumping from city to city with her single mother and she’s tired of running from a past that isn’t even hers to run from. When they return to her New England ancestral hometown to run the local family bookshop whilst her grandmother is travelling in Nepal, Josie knows it’s just a stop-gap. It’s only a matter of time before her mother gets jittery and wants to move again. Besides, Josie has her own plans for eventually ditching town and following in her famous photographer father’s footsteps on the opposite coast in LA.

What Josie doesn’t factor into her carefully thought-out escape plan is reconnecting with her former childhood best friend, Lucky Karras. Josie has fond memories of the boy from her childhood but this is Lucky 2.0 – a broody outsider and the so-called town ‘bad boy’ who’s clearly carrying his own resentment over Josie abandoning him all those years ago. But that all changes when a poorly executed act of revenge lands Josie in trouble with the police and Lucky unexpectedly takes the fall for her. As they spend more time together, Josie begins to see the old Lucky from her youth, the good boy with a dark sense of humour and a heart of gold. A boy who might just be a reason to stay.

In the acknowledgements of Chasing Lucky, Jenn Bennett tells readers that this book nearly broke her. By self-admission it took “many drafts, some blubbering, a lot of self-doubt”, but – from a reader’s perspective at least – all the struggles Bennett went through whilst writing her latest YA novel were absolutely worth it, because this is her best book to date. It’s a total charmer of a story, full of crossed wires, witty banter and the kind of swoony romance that makes you feel as weak in the knees as her young protagonist. It has a heartening message at its core too, one that instils the importance of family, friendship, honesty and putting your trust in the right kind of people.

I’m a sucker for coastal New England settings and Chasing Lucky has such a cosy, historical small town vibe, complete with crab shacks, family-run stores and a nearby abandoned island that plays a pivotal role in Josie and Lucky’s relationship. Unfortunately, small towns come with narrow minds and there’s plenty of prejudice towards Josie’s somewhat unconventional family and Lucky’s reputation as a delinquent.

Yet what makes Chasing Lucky such an endearing read is its two central characters, who are both emotionally damaged and scared of letting people into their fragile hearts, lest they get broken. Josie is holding on to a lot of pent up bitterness towards her mother, and she thinks she can solve all her problems by running away and pursuing a father who’s hardly even shown a cursory interest in her existence. It’s all too easy to blame her mother, the woman who might not be perfect but has still always been present, instead of a man who’s practically a stranger to her. Lucky has his own emotional turmoil but his is physical too; his scars a visible reminder of an event that still haunts him. Both Josie and Lucky hold the power to heal the other, if only they can look towards the future instead of looking over their shoulders into the past.

It’s rare for a young adult book to be romantic and realistic, whilst avoiding all the cringy stereotypes that populate the genre, but Chasing Lucky never feels clichéd or forced. It’s the kind of witty and warm-hearted YA book I’d have read over and over again as a teenager. Who am I kidding, I’ll still re-read it as an adult too.