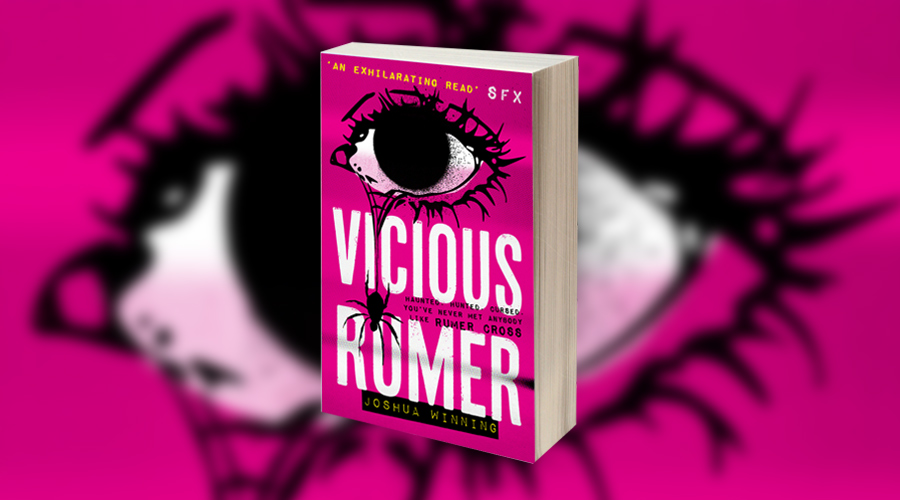 Joshua Winning’s bestselling thriller Vicious Rumer didn’t come about in the traditional way we think of when it comes to book publishing – rather than a publisher paying for the book to be written, this novel was funded directly by readers on Unbound, which goes some way towards telling you that this is a book that people wanted to see written. So, it’s absolutely no surprise then that Vicious Rumer is very much a crowd-pleaser, offering readers a strong and intriguing protagonist, a vividly detailed world and plenty of action from the very start.

Vicious Rumer opens with 19-year-old Rumer Cross interrogating a bloody and sobbing unknown man with a hammer as she desperately tries to find out information about a woman who’s after her – and if that isn’t a spot-on insight in to Rumer’s ruthless, violent and bordering-on-terrifying world, then nothing is. Rumer believes she’s cursed, born as the unwanted daughter of a violent criminal and abandoned as a child to be raised by a string of uncaring foster families, all the while living in the shadow of her monstrous mother and being terrified that she’ll one day end up like her. It doesn’t help that everyone Rumer gets close to has a habit of ending up dead in a freak accident either.

Alone, detached and self-reliant, Rumer scrapes a living by working for a small London detective agency, making herself invisible as she follows whoever she’s paid to expose that week. But when she’s targeted by a powerful mobster on the search for an occult relic last known to be used by her mother, Rumer is drawn into the violent, criminal underworld her mother Celene operated in – the very world that Rumer has spent so long trying to avoid – forcing her to face questions of identity, forgiveness and family even as she’s fighting for her own survival. In the words of Rumer herself: “Trouble always, always finds me.”

“I’ve killed more people than I can count but I never meant to. I’m not a murderer. Not in the way you’re thinking, because I never wanted to kill anybody. Not really […] The people I killed, I couldn’t help it. Remember that when I tell you what comes next.”

First thing’s first: opening up this novel requires you to suspend your disbelief in a big way. Winning has written a rich, compelling and dangerous world, but even if the violent mob and gang crime is entirely plausible, there are other elements to this story – curses, myths, ninjas and assassins, for example – that elevate Vicious Rumer to something beyond a typical modern day crime thriller, and how much you can get behind those ideas will depend on how much you’re prepared to give yourself over to the story being told.

The good news there, though, is that once you’re in, you’re most definitely in, ready to follow Rumer through whatever wild, terrifying situation she finds herself in next. As main characters go, Rumer is a unique one, and it’s fun to be inside her head even if only for a little while. Self-deprecating, resourceful and infinitely snarky, Rumer is a character unto herself in the best possible way, and the more we learn about her upbringing and experiences, the more you come to understand exactly where she’s coming from.

With Rumer as a guide to this new world and short, sharp chapters that continuously drive the action forward, Vicious Rumeris a constant thrill ride, leaving readers with no clue over where it’s going next. In that respect, and in many others, Vicious Rumer feels very cinematic – right down to the novel’s five-act structure. For the most part, this works extremely well, with Winning happily appealing to his readers’ imaginations in the lack of a VFX option through dark and detailed descriptions of gore and horror, while Rumer gets a chance to become a pure action hero as she escapes burning buildings and gets caught up in dramatic car accidents. Where the cinematic feel is let down, however, is in Rumer’s first person narrative, purely because she’s having to ask herself the kind of questions the readers should be asking without prompting, making for a stilted and repetitive narrative at times.

Even so, there’s a lot to like about Vicious Rumer. It’s a dark, violent, twisted action horror with plenty of gore that’s delightfully gruesome in parts too. With the more surreal elements of the narrative grounded by Rumer’s complex and fascinating character, what you’re left with is one big immersive dose of escapism in a quick and engaging read.

Vicious Rumer was published by Unbound Digital on 3 May 2018